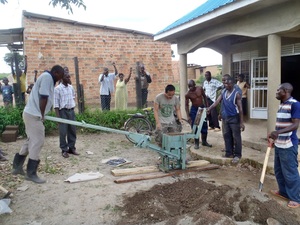 This is a program to develop the capacity to build water storage tanks throughout Uganda using the Interlocking Stabilized Soil Bricks (ISSB) technology. It is being implemented under the direction of Peace Corps Volunteer Jesse Coker.  It is part of the larger overall Water Tank Program – Uganda.

The program consists of promoting the technology by implementing a training and production system. It is designed to address critical water needs in Uganda, and also create a viable economic opportunity for local residents. It will lead to the availability of more water, a system of better practices, and a higher level of health care for the people of Kiruhura District and beyond.

The ISSB method and technology has existed in Uganda for twenty years. A former PCV gave Jesse the inspiration to explore this methodology. Currently, there are at least four other volunteers in Uganda whose host organizations are involved with this technique of brick making for the construction of rainwater harvesting tanks. The cost for building these tanks is less than that of other methods currently being used locally.

Under the ISSB method, the bricks are made at the site where a tank is being built, eliminating transport costs and the subsequently damaged bricks. Bricks are made through a manual compression machine, which requires neither electricity nor fuel to operate.

A simple mixture of subsoil, water, and between five and ten percent cement is compressed, and the resulting brick needs to cure for two days before it can be used. This is in stark contrast to the firing process that requires vast amounts of firewood and about three months’ time to make bricks, which are also of a lesser quality.

The bricks that are produced by the ISSB methodology are weatherproof and do not require firing. They are interlocking on four sides and are curved in order to easily build a range of water tank sizes between 5,000 and 25,000 liters.

Because of the interlocking nature of these bricks, only five millimeters of cement needs to be used between courses of bricks. Courses are built on top of a stone and cement foundation, with diameter and height determined by tank volume.

Depending on the capacity of the tank being built, structural reinforcements are added, such as rebar between every third course of bricks for a 20,000-liter tank. A metal support pipe is added to the inside of the tank to support the cement roof that is built.

To complete the system, gutters are added to the adjacent building for harvesting the rainfall that is received during one of two rainy seasons. The resulting process is cost-effective, durable, and environmentally friendly, and helps the local economy.

The team is presently in a stage of marketing throughout the community, visiting other health centers, schools, churches, businesses, and some private households.

As the program grows, the ability to build larger capacity water storage tanks (30,000 to 100,000-liters) will be developed.

Continuity and sustainability will be achieved when Jesse is replaced after the conclusion of his Peace Corps service in October.

The first project be built under this program was the Sya Bright Future Primary School Water Tank Project – Uganda.

The second project be built under this program was the Kanoni Water Tank Project – Uganda.

And, the program has even spread to other countries, spawning projects like:

To indicate your desire for your contribution to be allocated toward this program, please click the Donate button below.