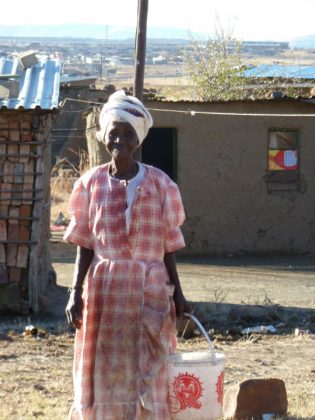 Community Description
Ladysmith is a relatively medium-sized town in the uThukela district, inside the province of Kwa-Zulu Natal, in South Africa. It is considered the central commercial shipping hub between the port city of Durban and the capital city of Johannesburg.

Umbulwane, also known as Little Qwa-Qwa (Qwa-Qwa being a large Lesotho settlement in South Africa) is a settlement of Lesotho immigrants located between the large townships of Ezakheni and Steadville. It is home to around 1,000 people, although this figure is only a guess as the area is not officially recognized, and census reports in South Africa are very inaccurate in general.

HIV/AIDS prevalence is expected to be close to the nearest neighboring town, Steadville, which has a 42% prevalence rate. Due to the high prevalence of HIV/AIDS, there is a large orphan population with grandparents representing a large portion of the caretakers in the village. A local crèche has been built with government and private funds to house the orphans during the day. 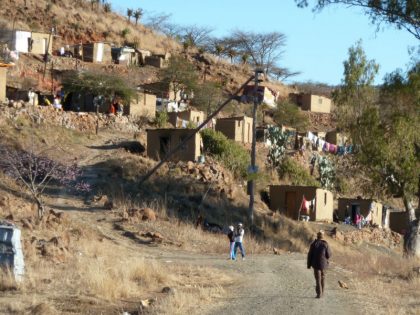 The village is located on two sides of a prominent road. One side is flat and spread out while the other is more condensed but situated on the side of a steep hill running alongside a small river bed. The river water is not safe to drink as it is located near many factories, and sewage pipes empty into it upstream.

Fortunately, there are water taps supplying clean water to the village, but there are only about a dozen of them located along a straight line through the village. Water piped directly to the homes is not available.

After conducting a Participatory Analysis for Community Action (PACA) with roughly eighty of the village elders it was determined, using pair-wise ranking, that water distribution was the number one need of the community. 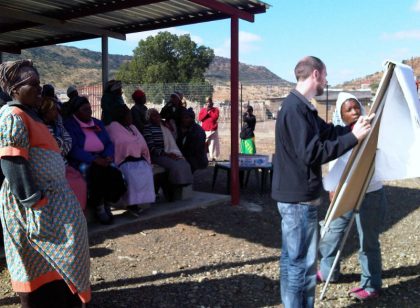 The water taps available in the village are too far apart for many families to comfortably carry water back to their homes. Traditionally, women and children are responsible for fetching water. Without access to wheelbarrows and water jugs, many of them balance buckets on their heads in order to transport the water from the tap to their homes, often over long distances or up steep inclines.

Project Description
This project is to provide water to an unserved segment of the population using a simple system of wheelbarrows and water containers.

Ten or more wheelbarrows and twenty 25-liter jugs will be purchased for the community members to share when fetching water. Each of the wheelbarrows and jugs will be numbered using spray paint and stencils in order to keep track of them individually. They will also be labeled with the identification of the sponsoring organizations, which will make them easily identifiable.

All items will be stored inside an 8-foot high gated area that surrounds the community crèche located near the middle of the village. They will be further secured using a lock and chain linking them all together when not in use.

The lead caretaker at the crèche, with whom Izimbali Projects shares a close relationship, has volunteered to be responsible for the safekeeping of the items. The crèche is operated seven days a week allowing anyone to easily check them out by signing a check-out sheet. This will ensure that it is known who has a wheelbarrow and jugs at any given time, and that they are checked back in by the end of the day.

By utilizing wheelbarrows and water jugs the villagers will be able to haul more than twice their usual amount of water back to their residence for each trip, and it will obviously be much easier on their bodies.

A local hardware store will sell the wheelbarrows at 20% off. Another local distributor will provide the 25 liter jugs with caps at-cost.

Due to the extreme lack of funds in the community, the community involvement will be in the form of helping assemble the wheelbarrows, stenciling the numbers and names on the sides of each item, and maintaining their safekeeping.

Project Impact
It is estimated that 200 people, or 20% of the village, those responsible for gathering water, will benefit directly from the project. The whole village will benefit indirectly from the potential use of the wheelbarrows and containers other tasks, such as delivering water to the active community garden, hauling building supplies for constructing, or repairing homes (many of which are made of a hardened mud material).

Comments
This project uses the most basic and appropriate technology to bring water for the community. Its simplicity does not detract from the impact the project will have on the lives of the people.

We encourage others to continue to donate using the Donate button below, and we will notify Josh of your donation. Additional funds will be used to fund the next project by the PCV and/or other projects in the country of service.