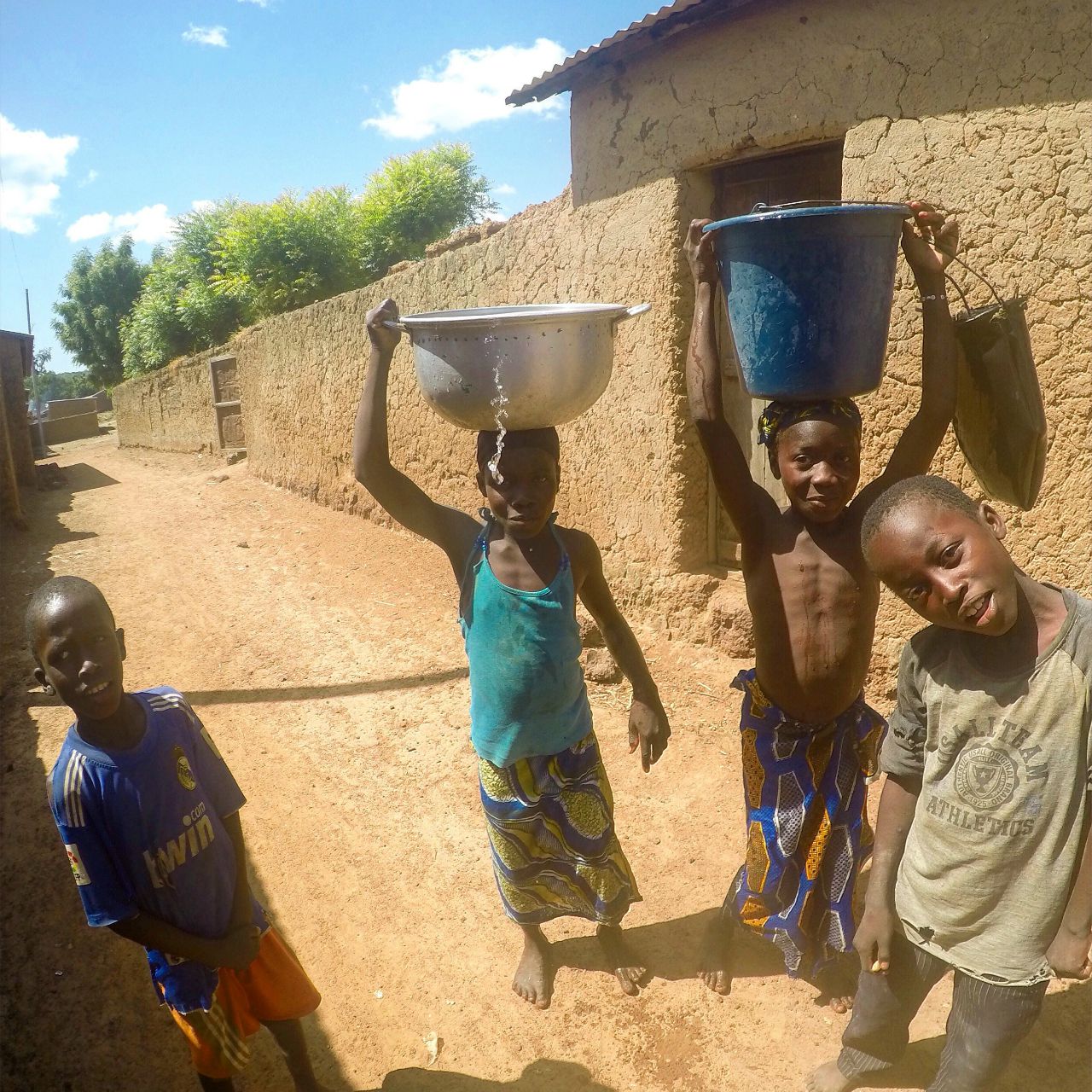 Community Description
Jxxxxx is an ethnically Jahonka village in the Central River Region in the North Bank of The Gambia. Jxxxxx has a population of ~630 people according to the village census that the Village Health Worker completed with the Peace Corps Volunteer in July. There are 19 compounds and the entirety of the village population is reliant on the continued functioning of the solar tap system.

The existing solar power tap system has 3 tap locations in prime locations in the village. Bxxxxxxx is also an ethnically Jahonka village with a population of ~2,100 people, according to the village census that the Village Development Committee President completed, and ever increasing because of the presence of a prominent Imam residing there.

Problem Addressed
Currently, there is a solar tap system that serves as the sole source of clean water for Jxxxxx, Bxxxxxxx, Jxxxxx Lower Basic School and the Health Center located in between the two villages.

Because of increases in population, the current water supply system does not have enough capacity to supply sufficient water to both communities nor the local Health Center and School. This project will address the supply of inadequate water and access to potable clean water in new settlements in Jxxxxx and Bxxxxxxx.

Project Description
This project will increase the capacity of the current water supply in Jxxxxx and Bxxxxxxx. Water Charity funds will be used to pay for the following activities:

• Drilling a new borehole adjacent to the current borehole and water tower.

• Install 5 additional water collection points (4 in Bxxxxxxx and 1 in Jxxxxx).

• Connect to the current pipe network the grant fund will support the extension of pipe network of 556 meters to reach growing new settlements in the two communities (Jxxxxx and Bxxxxxxx). 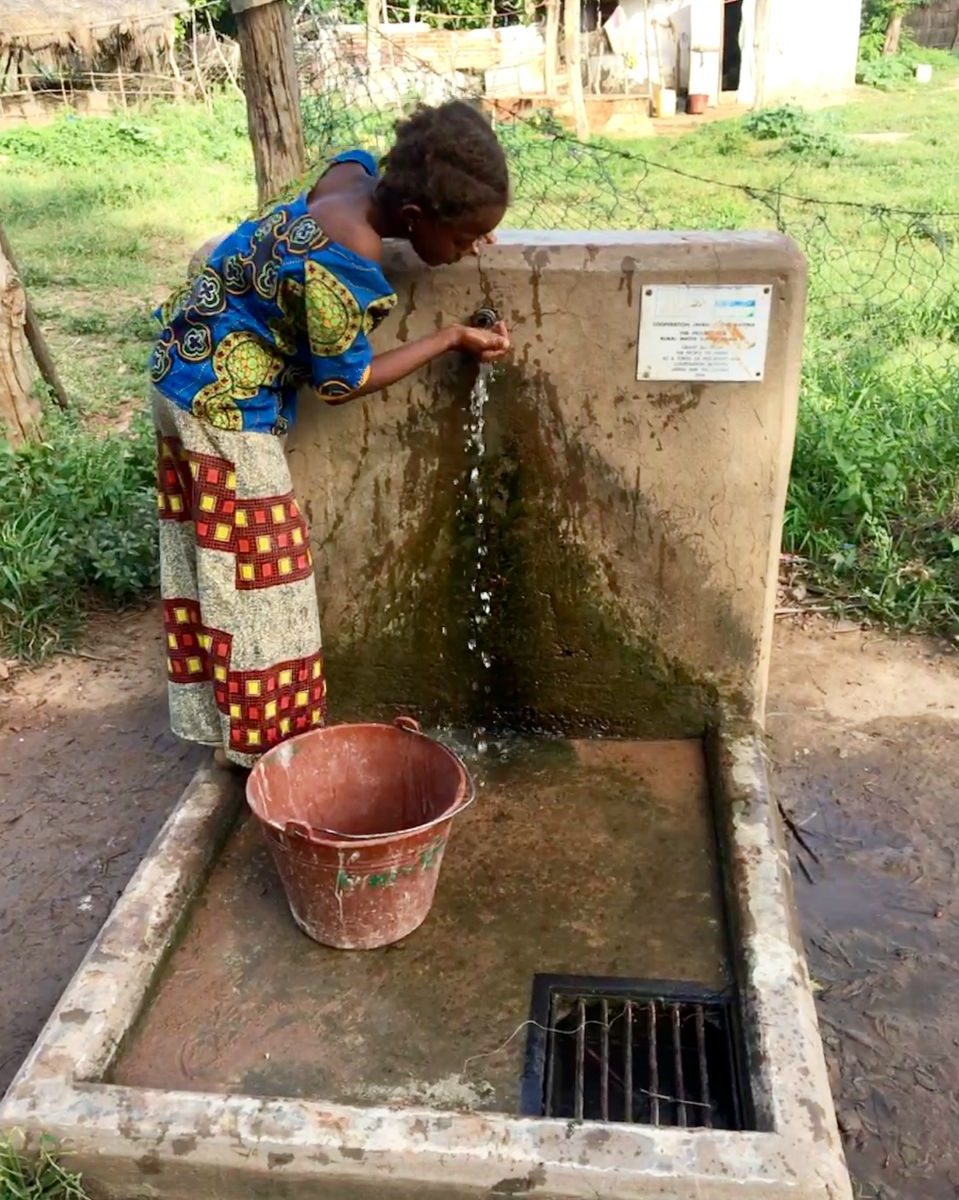 • Conduct hygiene and Sanitation, financial management, technical training on the maintenance of the system by the PCV and counterparts and contractor representative respectively for the new Water Committee that will comprise representatives from the two the villages.

3,248 people living in the two communities, including 1,335 who are boys and girls under the age of 14, will benefit from the project.
Peace Corps Volunteers Directing Project
D. Warren and B. Richardson are managing this project.
Monitoring and Maintenance
A joint water committee will be trained on managing water systems, water sanitation, and water systems maintenance to prepare them for the improved and newly-installed water systems and overall sustainability. Thereafter, they will maintain and repair the system as needed.

Let Girls Learn
This is a Let Girls Learn project, as it will accrue to the benefit of girls, upon whom the burden of retrieving water usually falls.

This Let Girls Learn project has been completed under the direction of Peace Corps Volunteers Brian Richardson and Dominique Warren. To read about the start of the project, CLICK HERE.

The project was designed to drilling a new solar-powered borehole, install 5 water taps, extend the piping network, and conduct trainings on sanitation, hygiene, financial management, and technical and maintenance issues. 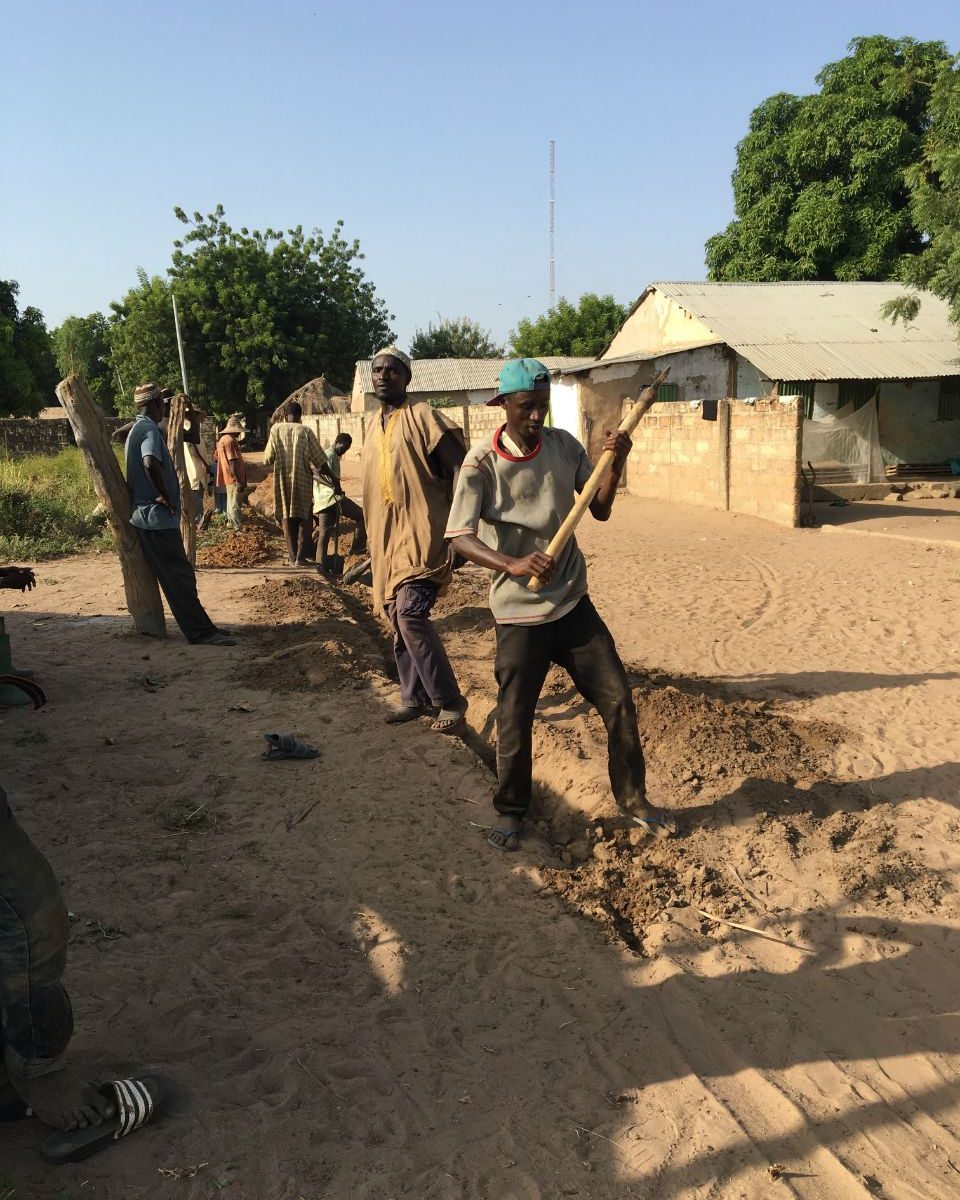 The Solar Tap Extension Project was over one year in the making. Multiple community members approached me with the idea of improving the access to water especially those furthest away from a water collection point. People complained of taps being too far away, water unavailability, lack of water at the health center, and too many girls arriving to school late because of extended water fetching times. Because of a constant barrage of complaining, the Village Development Coordinator (VDC) of Jailan approached me with the idea of the Solar Tap Extension Project.

Speaking with the VDC of Jailan & Bakadaji we decided that it was something that we as a community can achieve and that it would benefit everyone. All of the planning for this project was done by the VDC’s, community leaders and a little guidance from myself. The VDC Chairs were given specific questions from the grant application form, such as type of community involvement, expected outcomes, implementation and sustainability. Over a year, meetings were held with both communities to collaboratively answer these questions and devise a strategic plan. I was present for all meetings.

Overall, I am absolutely astounded with the progress that the communities made together. The two beneficiary villages have had their disputes in the past, but cast their differences aside to achieve a common goal. The project implementation was flawless, community involvement from both communities was outstanding. The two communities collaborated, supported each other, the VDC’s and communities showed initiative. The water committees worked night and day mobilizing the communities and provided creative ideas to belie potential problems and overcome challenges.

Community Health Nurses expressed how increased water pressure at the local health center allowed for them to spend less time fetching water and more time tending to their patients. The Headmaster of Jailan Lower basic school also reported more girls arriving to school on time indicating they spent less time fetching water than before the water system was installed.

The water committees established because of this project developed water management strategies to improve access for community members, they set up a payment system for water system management and repairs that was both affordable and accepted by the community. The initiative displayed by the water committee and community leaders are clear examples that the project was successful and those involved were positively impacted. 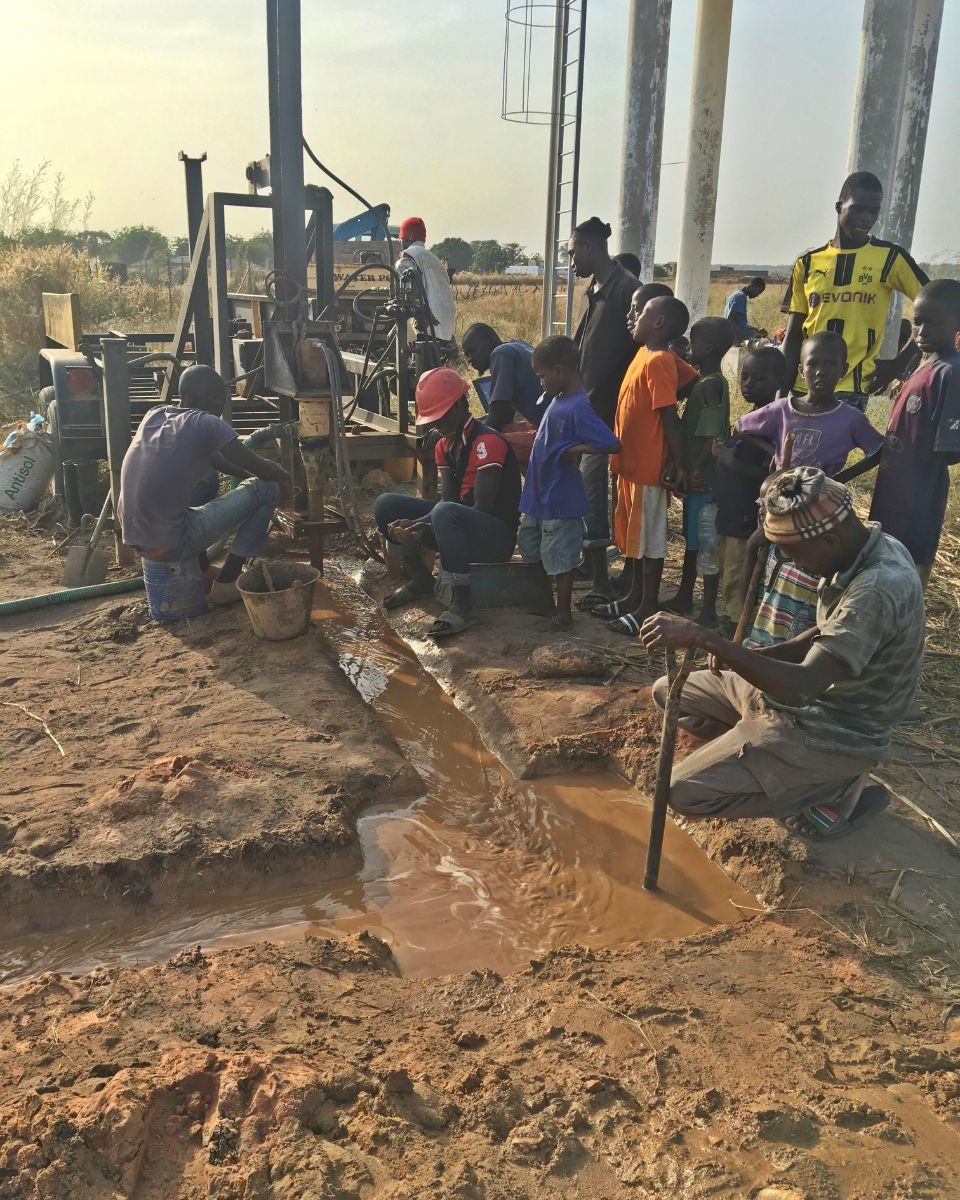 All the project goals to a certain extent were met. Between the two communities, Jailan and Bakadaji, three water committees were established. One solely for Jailan, one solely for Bakadaji and one joint between both communities (because of shared water system). The three committees were, after several water committee trainings, able to apply various water system management plans as well as a maintenance and sustainability plan for the expanded tap system. The original goal was to train the entire population of both communities on proper tap usage and management myself, but the plan was changed so that the newly trained water committees would lead the trainings on proper tap usage and management. With great success the committees were able to transfer their knowledge to the community, reflected by the fact there have been no reported need for repair of any taps throughout the village.

Due to a dispute with the headmaster of Jailan Lower Basic School I was not allowed to collect data from attendance books regarding girls’ tardiness. I did however speak with all the teachers who verbally assured me that after construction that no girls have been late to school. One teacher went as far to say that his daughter, who attended the school, was on time because she finished all of her chores. Her largest and most time-consuming chore involved fetching water. Though reducing wait time at the pump was not listed as a goal or objective it was observed that prior to construction that wait times at the tap ranged from 20 minutes to 1 hour whereas after installation women and girls spent 5 minutes or less waiting for their time at the tap, this due to better dispersion of tap location.

The communities expressed positive feelings towards the project. Many men, women and girls expressed gratitude for not having to travel so far to fetch water and also not having to wait so long to receive water. Community leaders expressed that the completion of this project and my assistance will leave a permanent effect on the village. The newly established water committees and their member were grateful for the opportunity to take on leadership positions in their community. The committees were not made up of elder men as it usually would be. Young men and women ushered into these leadership positions were happy to have responsibilities and to be respected. Women held a dance party that lasted many hours in front of my home to express their gratitude.

The water committees showed great grasp of the knowledge they were trained on. The committees raised over 30,000 Dalasi for potential tap system issues and established a monthly tariff that is affordable and was accepted by their communities. The committees also established rules and regulations regarding tap usage including: usage times, who can and cannot fetch water, open and close times for taps, and assigned compounds to specific taps. The aforementioned achievements showed great ability to mobilize the community as the meetings to discuss the monthly tariff and other water committee rules went well after 10 pm. The community now has the ability to establish bylaws for committees as well.

The project is highly sustainable as the newly established water committees have taken the necessary steps in order to ensure that tap system maintenance among other things are taken care of. The water committees have even established bylaws regarding water committee election times and length of service. The committee also has planned to hold a minimum of 6 meetings per year, every two months. 3 of the meetings will be held among the committees themselves discussing potential issues, the committee’s bank statement, and potential improvements. Three meetings will be held with the communities to shed light on the happenings within the water committee (bank statements, plans) and receive the community’s complaints, suggestion and approval.

The original plan for tap locations and how many taps were changed last minute by the community’s decisions. This was unexpected as there were several meetings discussing the very issues of location and number of taps. After much arguing the amount of tap heads installed increased from 5 to 6 and the location of 4 top the 6 taps heads were changed. Because of the changing of location and addition of an extra tap the contracted company work was delayed for a week as the needed materials needed to be transported to the villages. Though this was an unexpected event that led to many arguments and one fist fight it did not affect the overall project. By the suggestion of the contractor, a refundable contingency fee was included in the contract. This contingency fee allowed for the communities to extend tap locations and add an extra tap head. All in all, I recommend holding as many meetings as possible to really see that the original plan does not change and include a contingency fee!

This project took over a year to come to fruition, and the time taken to plan it was necessary. I and the community took things nice and slow as it allowed for us to plan out every aspect of the project and lay the groundwork for years to come. I also believe that putting young men and women in leadership positions in the community yielded excellent results. The youth seemed hell-bent on proving to their elders, their family, their friends and themselves that they were capable of being the head of important committees and driving positive change in the village. Placing youth in leadership positions is a promising practice that I hope the two communities continue to engage in.

We extend our thanks to Brian and Dominique for completing this outstanding project. 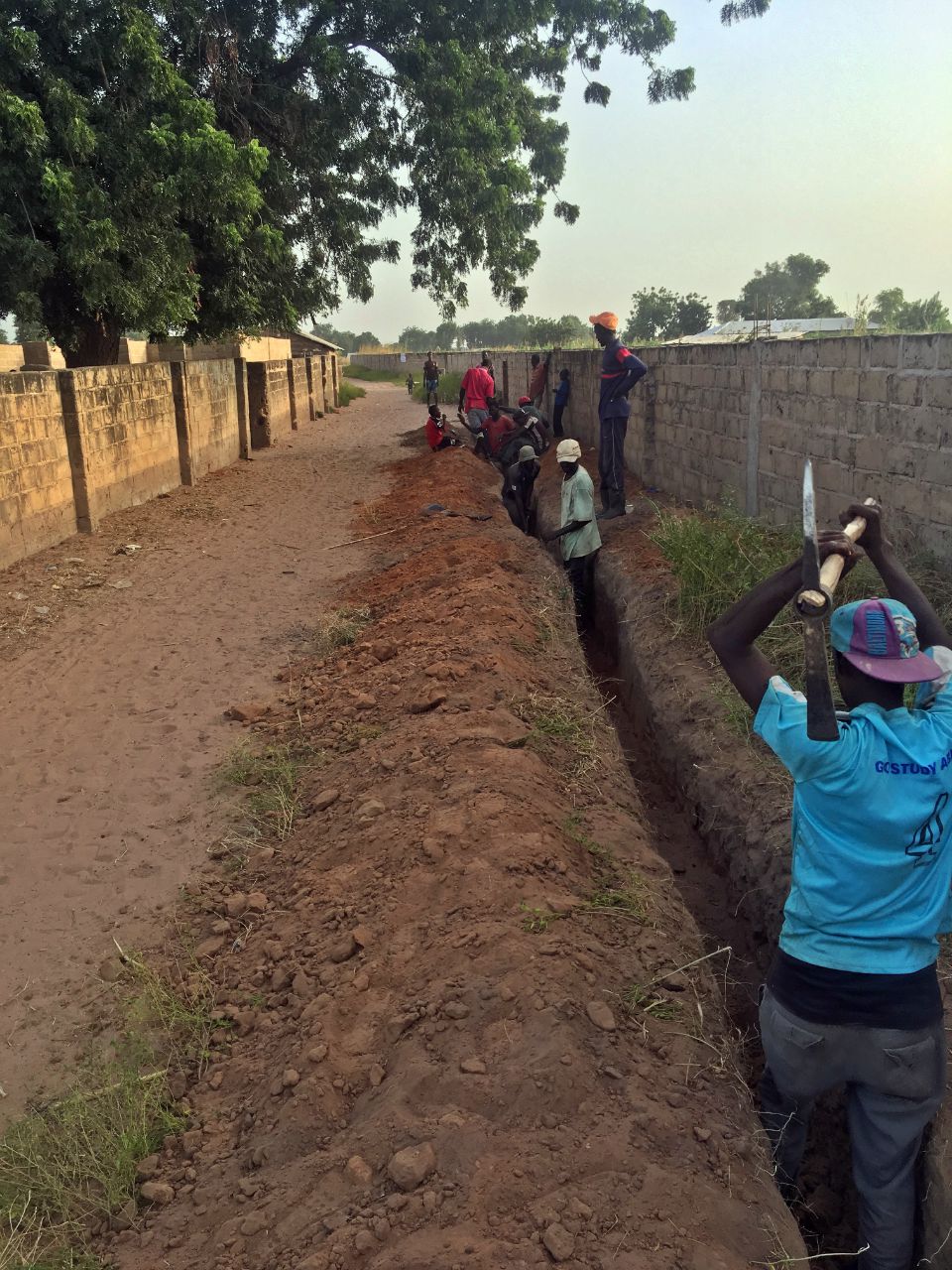 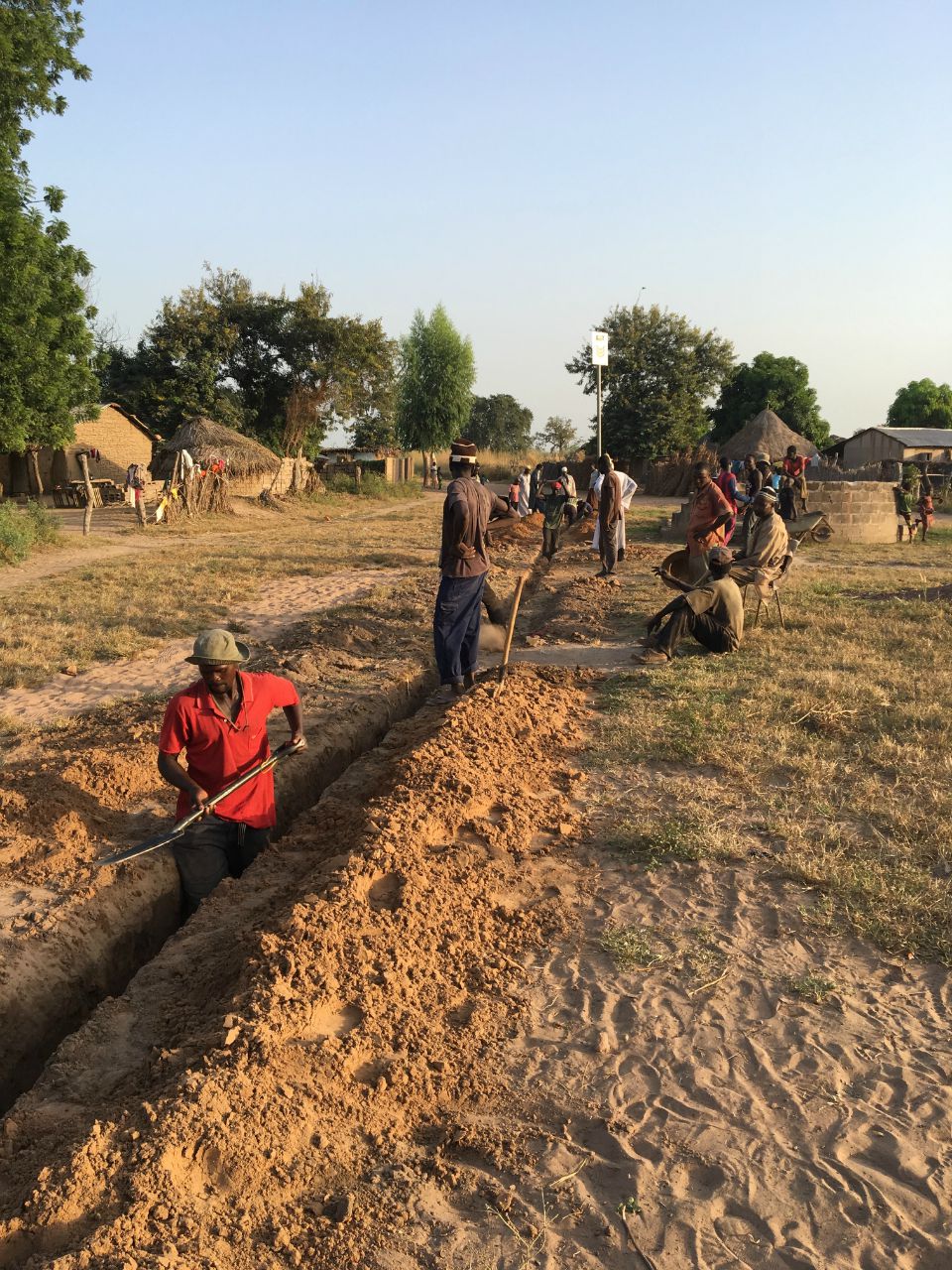