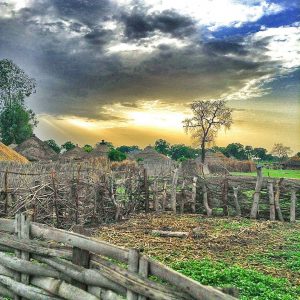 Community Description
The small village of Sinthiang Cherif is located in the region of Kolda in southern Senegal. This particular region is known as the Fouladou in which the population speaks various dialects of Pulaar; Sinthiang Cherif’s inhabitants speak both Fulakunda as well as Pulafuta. While the village may be young at 26 years old, Sinthiang Cherif has been able to secure for itself vital resources such as robinets (running water from a spigot), a paved national road, numerous fields for farming, and 3 boutiques in which people are able to buy basic necessities.  While these victories may seem small, they are in fact large hurdles overcome by a village of 240.

Geographically speaking Sinthiang Cherif is located at the top of a hill, safe from flooding during the rainy seasons (May-Sept). However, the village faces another challenge: rocky soil, despite this the population has managed to acquire several corn, millet, peanut, and cotton fields. In addition to this, the village also generates its income by way of charcoal, lumber, and livestock such as goats, chickens and cattle.

Regardless of the size of the village, the population has placed importance on education.  Therefore, a primary school exists in Sinthiang Cherif to educate the young children, who account for about half of the population. Since the celebration of birthdays is non-existent within the culture, it is difficult for the population to know their exact age. However, it is easy to note that there exists one child for every adult, and the population is continually growing with a new birth approximately every month.

The senior population is less evident. However, the village does have a sort of “retirement” compound in which a few senior citizens live together and divide responsibilities among themselves. The entire population of Sinthiang Cherif is overseen by the chief who intervenes when issues arise between individuals; holds meetings to maintain the village aware of new projects or problems arising within the village; represents the village at various events, and other responsibilities that may arise. 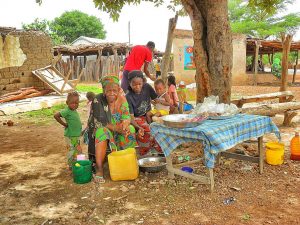 Since the village is entirely Muslim, the chief also participates in leading religious holidays such as Korite and Tabaski. The village of Sinthiang Cherif is continually seeking ways to better the quality of life for its citizens, including the addition of electricity in the future as well as latrines.

Problem Addressed
Since it was founded 26 years ago, Sinthiang Cherif has lacked the proper facilities necessary to dispose of human waste. All 29 compounds are in need of latrine improvements, completion, or have no latrines at all. Approximately 13 compounds had initiated the construction of a latrine for their household. However, these latrines are unsafe for use, especially for children. Since many of these unfinished toilets are simply deep holes in the ground, a falling risk could create devastating consequences. Sixteen compounds lack any sort of facility to use. Therefore, they resort to open defecation in wooded areas. The lack of an appropriate latrine leads to behaviors such as open defection, a lack of dignity and privacy, and the transmission of sanitation-related diseases such as diarrhea.

Project Description
A meeting was held in October 2015, with the head of every household to discuss the budget of the project as well as the logistics. It was collectively decided that every compound in Sinthiang Cherif was in need of latrine improvements, completion, or needed a latrine built since there was none available to them. 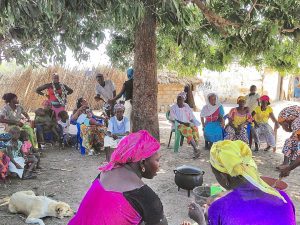 The village was divided into compounds that have a latrine but needed vast improvements; compounds that started to dig, but had not finished; and lastly, compounds that did not contain a latrine, as such the prices would vary between the three groups. A discussion of the different costs was held and their respective contributions were calculated and everyone was informed of these expectations. Approximately 29 Turkish toilets will need to be completed before May 2016, as that is when the rainy season begins.

Water Charity funding will cover the cost of materials and mason wages.  The village’s contribution is to complete the construction of an enclosure around their new latrines for privacy, in addition to 25% of the cost of the latrine (amount varies per household). 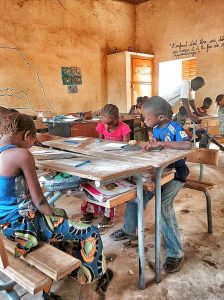 The rocky soil is an issue that the village would like to resolve by using a power auger from an outside source. This cost has been included in the project, but if a compound wished to save money, the individuals will dig the hole itself. Other technologies for the construction of the latrines include a donkey charette for the transportation of sand and rocks, shovels, trowels, string line and line pins, and water and buckets.

Lastly, the village is expected to participate in the WASH, soap making and latrine maintenance trainings that will be held and facilitated by a counterpart and World Vision. After the successful completion of these trainings as well as the privacy enclosure, each compound will receive a certificate of completion which will serve as a reminder to each compound of their commitment to maintain their latrines and ensure sustainability.

Project Impact
This project will impact 240 villagers as well as all visitors.

Monitoring and Maintenance
While it is important that each compound receives a latrine, the need for good WASH practices is also important. To start, a WASH mural was created depicting hand washing with the use of soap and running water.  Next, Raquel held a soap formation in which she cross-collaborated with a Community Economic Development volunteer who taught the women of the village how to make simple soap for hand washing, then educated the women about the proper hand washing times. This training will be repeated upon the completion of the latrines to reinforce this information. 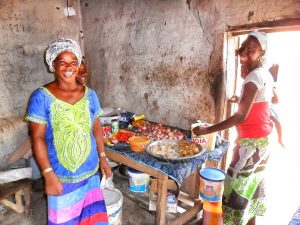 ADOPT THIS PROJECT BY CONTRIBUTING THE DOLLAR AMOUNT OF THE PROJECT.
Donations of any amount will be appreciated. The full amount will allow you a posted dedication, if that is something you would like.