Community Description
Canton San Antonio is located 7 Km north of its municipality center El Triunfo in the northern zone of the department of Usulután. A 2007 census reported 890 residents in approximately 115 families.

The canton has an 80% graduation rate from the local public school of 9 grades. Half receive a 3 year high school degree, and less than 20% pursue college. Very few individuals pursue technical crafts outside of agriculture.

San Antonio is on a fairly well-traveled road which connects El Triunfo to Sasorí. The canton has above-average access to transportation. The majority of the houses have direct vehicle access, and public buses pass every hour.

95% of the community has electricity and access to mail. As there is no phone line, the majority of residents use cellular phones. 80% of residents own titles for their land.

In addition to river water, the canton has access to natural springs which supply the majority of water for drinking and washing. 25% of the residents are connected to a small gravity-fed chlorinated system, but the water is not used for drinking.

San Antonio, like many other rural communities in El Salvador, has a rainy season and a dry season. During the rainy season (May-Oct) farmers are actively growing and harvesting crops to sell in the markets and to feed their families.

Crop diversity is low due to time, temperature, and weather constraints. The majority of crops grown are beans and corn. During the dry season (Nov-April) there is no work, no crops, and the families are completely dependent on the income and stored crops from the previous rainy season to survive until the next rainy season.

Runoff from the chemically treated fields penetrates into the water systems and causes sicknesses in the communities. Fertile soils are being replaced by chemical supplements which add to the country’s growing erosion problems as well.

Project Description
This project is to build 3 aquaponics systems. It is a natural extension of a prior project in which community members were trained in the technology, and a model system was built to demonstrate its benefits. 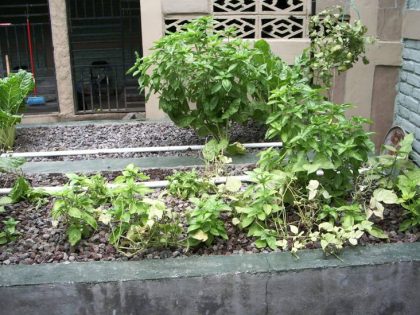 Aquaponics is a new and innovative farming technique that combines agriculture with aquaculture. In this system, there is a fish tank that contains Tilapia and a pump that pumps water into grow beds filled with volcanic rocks and plants. These grow beds have a flash drain (like a toilet) so they completely fill and empty every 15 minutes.

The process is that the fish create manure that is pumped to the grow beds where bacteria break down the manure into nitrates which the plants then absorb. Thus, the fish receive clean, aerated water and the plants receive nutrients. Since the system cycles, there is no need for additional water, except to replace what evaporates. The benefit in this country is that this system allows farmers to farm organically year-round.

With the project funds, 3 submersible pumps, PCV tubing, 300 lbs of fish food, and 4,000 fish will be purchased. This will be sufficient to get the farmers started, and the system will become sustainable with the funds derived from the output.

A cooperative was started to assist and encourage people to build aquaponics systems. Two families have already constructed their fish tanks, and a third is saving the funds to do so. These families were selected based on their enthusiasm and participation in the training, and their desire and ability to follow through.

A model system was first built as a training system. PCV Rosenfeld and the early adopters will continue classes with local farmers, the national Agronomy University, Ministerio de Agricola, and various other NGOs in the country.

Each participant will build his own grow beds, which is the biggest cost of the project. The grow beds will be made of cement and filled with volcanic rock.

Within the grow beds farmers can cultivate almost any plant from vegetables to fruit trees to ornamental plants to sell in the local markets. Currently, they are working with Roma Tomatoes and cucumber. 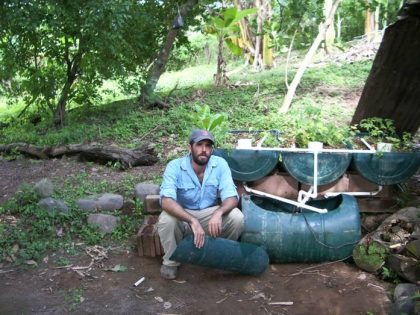 The co-op will donate 10% of its annual profit to the ADESCOPAZ de Canton San Antonio, an elected community government body whose purpose is general community development. Currently, that body is working on projects such as a potable water system for the village, and a children’s park.

Project Impact
Three families will benefit directly from the project. However, its successful completion will doubtless stir many others in the community to embrace the technology and build systems of their own.

Comments
This is a project that demonstrates the benefits of an extremely valuable and useful technology to the community. It will compel others who have been trained to follow suit and will create interest in still others to undertake training.

The fish and produce can be used by participants to help feed their families. However, the items produced in excess of the individual needs can be sold, making this project a model in business implementation.