WORKING WITH FRIENDLY WATER FOR THE WORLD. 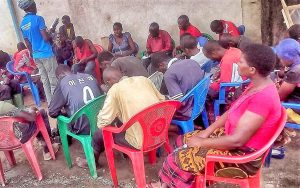 Rukwa District is in far western Tanzania, bordering Lake Tanganyika, Zambia, and Congo-DRC. It is home to the Fipa people, most of whom live by subsistence agriculture and sheep herding. There is also a refugee population from the Congo. It is a highly underdeveloped area, some 1,500 miles from the nation’s capital. With a million people, there are few roads (no airport), little industry, few doctors, and virtually no public health infrastructure. There are very few active non-governmental organizations.

Waterborne illnesses are the norm. Cholera and typhoid are a yearly occurrence, but this year, cholera has hit particularly hard. So far, there are more than 600 cases, and scores of deaths reported (but very many are never reported). 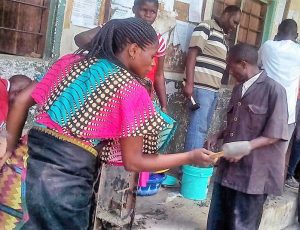 and near the shores of Lake Victoria, and Water Charity & Friendly Water have both worked with him on other projects of this sort. Entire communities have been rejuvenated; funds saved have been going toward new community development projects – chicken- and goat-raising for the market (and in the Serengeti, for local hotels), leatherwork, small community gardens. Not only are people freed from waterborne illnesses; they are eating better. Children are returning to school. Clean water is the true basis of community development.

Once they’ve seen what we can do, local governments in Tanzania have gotten in on the action. They’ve provided free transportation for trainees, free training space, and have even donated land for ongoing operations. Clean water has truly become a community affair. And there has been nationwide publicity. Hence the call from the Rukwa District Commissioner.

We sent a very small amount of money to Stephen to go visit, 1,700 kilometers away. On a bus. It took two-and-a-half days to get there. Stephen found a community ready to work, and the local government ready to help.

This is a project to train as many people as possible in the region in the construction of BioSand Water Filters.  We have done a good many of these projects over the years, and it is an extremely efficient way to spread filters and clean water throughout the region.  Trainees not only make their own filters and learn the technique, but they can sell water, sell filters, and train other people in the technique.  The ripple effect from these projects has surpassed all expectations because when you give people a solution to their biggest, most pressing problem, they are highly motivated to put it into practice in a big way. 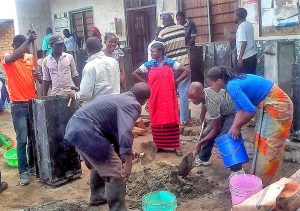 Stephen worked with us (and the local government) to craft a plan. There was no time to train a local welder, so steel molds were made and shipped, along with other equipment, from Mwanza.  As with many of our projects, this is already well underway.  We prefer to start projects immediately and then when there is time, we present it to our donors and try to recoup the funds we have already spent.

Originally, this project was intended to be 8 separate pieces of training.  However, since there wasn’t time to train eight separate groups (from the eight sub-regions hardest hit), we have begun to train them all at once. A team of three from HRCO went down to Rukwa (yes, the same bus!) to conduct the training, and then after, to go from community to community setting all the workshops in motion. The government is paying for all their expenses while down there plus transportation for Filters, as well as contributing funds for half the starter materials, making it possible for each participant to purchase a BioSand Filter at cost. Filters would be sold – not donated (except to orphanages, health clinics, and families impacted by HIV, if groups applied under our Card program). The team is planning to stay several months, providing follow-up and on-the-ground monitoring and evaluation.

Stephen is currently in Rukwa, meeting with every government official in all of the sub-districts, and presenting at community meetings. Water Charity, in coordination with Friendly Water, has laid out all the funds. 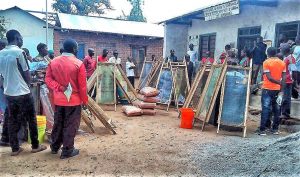 The enthusiasm with which the team has been met is already extraordinary. We very much expect that the project will allow the communities to get a handle on the current cholera outbreak – we’ve managed that elsewhere, so there is no reason to believe it can’t be accomplished in Rukwa. But more than that, the people of Rukwa will have demonstrated that, with the necessary knowledge-sharing and training, they will be able to take control of their lives, complete in the knowledge that clean water, and an end to waterborne illnesses, are within their grasp.

We expect that the eight teams will also significantly contribute to village economies. Funds that have been going toward medical treatment and pharmaceuticals (which can be up to 70% of a family’s income) will now be towards better nutrition, home repair, the development of small businesses, and expanded agriculture. School attendance will increase; fewer young children will experience parasitic stress. People will begin to be able to plan more rationally for their own futures. 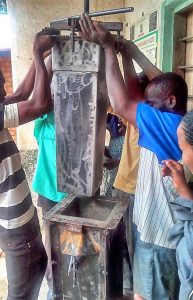 If each group builds and installs 400 Filters in the next 12 months, more than 40,000 people will have access to clean water; more, if Filters are shared. Also, if successful, we expect the groups to purchase more steel molds, which will expand their operations.

The project is being directed by David Albert, Chairman of Friendly Water for the world, working with Stephen Marwa, Director of Hope Revival Children’s Organization (HRCO) in Musoma, Tanzania. The latter organization provides services to orphans, children with HIV (and their parents), pregnant and parenting women. HRCO has spearheaded many initiatives in small business and cooperative development – leatherwork, chicken-raising, market-based vegetable growing, handicrafts, and manufacture of interlocking bricks. Stephen started work with Friendly Water for the World more than three years ago and has strong relationships with local governments in the region.

Each of the eight groups will have a trained monitor, who will go into homes to ensure BioSand Filters are installed properly and are being used correctly. Reports from each group will be done in 90 days, at which time business plans will be adjusted as necessary. In addition, trainers from HRCO will remain in Rukwa for 2-3 months to monitor ongoing progress at each of the eight workshops.

$13,000 has been contributed by the local government.  The remainder has been paid for through the generosity of an anonymous donor.

If you like this project and wish to see additional training of this type, please Donate using the button below. 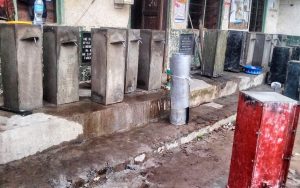 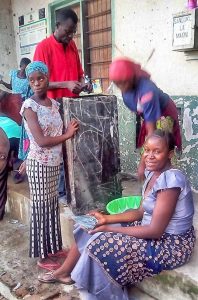 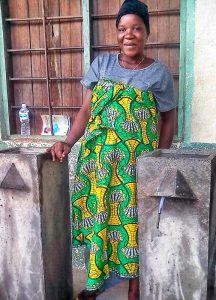