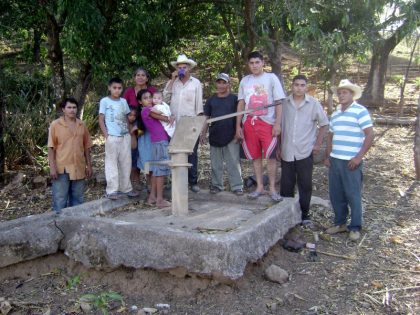 Community Description
The village of Cacahuatalejo (“cacahuate” meaning “peanut” and “Alejo” being the name of the community’s patron saint) is located in the southern part of Morazán in eastern El Salvador.

Home to 875 residents, Cacahuatalejo lies nestled in a valley surrounded by rolling hills and mountains scattered with teak forests. Life for the men of the village revolves around farming corn, beans, and sorghum and raising cattle and pigs.

The women work primarily in the home, cooking, cleaning, childrearing, and tending chickens. There are two schools in the village, one ending after 6th grade and the other after 9th, and children attend for half of the day, then spend the rest of their time working in the field or helping with household chores.

On the surface, life appears to be simple and uncomplicated, but as a poor community in the poorest department of the country, Cacahuatalejo and its residents face many challenges, the biggest of which is water.

Several years ago, the Community Development Association of Cacahuatalejo undertook the large task of bringing running water to the village. Today, approximately half of the homes are connected to the system, which delivers running water via underground tubing twice a week during the rainy season (May-November). Although this situation isn’t ideal, residents generally find that they have enough water to cover their basic needs. That isn’t the case during the dry, summer months of February through April, when water comes through the system only once every one to two weeks. Residents are forced to turn to alternative sources, such as creeks or private wells, but these tend to dry up quickly.

Papalón is significantly poorer than the rest of Cacahuatalejo, and its relative isolation from the other neighborhoods means that its problems are often overlooked. None of the houses in that part of the village are connected to the water system due to their considerable distance from the water tank and the rest of the community. Instead, residents rely on a public pump that was installed to provide water for drinking, cooking, bathing, cleaning, and tending livestock. 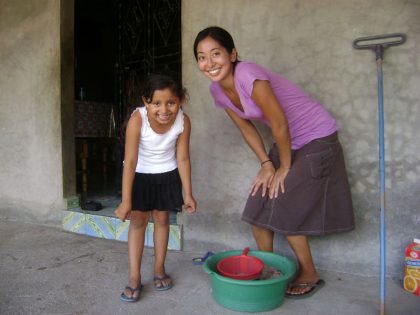 The pump’s current tubes are the originals, meaning they’ve been around since the pump was installed back in the 1970s. They’ve suffered a lot of damage due to rust and earthquakes, making it impossible for water to make its way up to the spout.

Residents must now haul water from private wells located in other areas of the community, a task that can take up to several hours a day.

Project Description
This project is to repair the public water pump in the neighborhood of Papalón by replacing the damaged tubing .

In addition the pump’s current cement platform, which is starting to deteriorate due to use and weather, will be reinforced with new cement. A stand with 6 pillars and a roof will be built around and above the pump to protect it from future damage.

Project funds will be used for the purchase and transportation of materials. Members of the community who received training during a previous Water Charity project will provide manual labor and instruct the residents of Papalón in proper pump maintenance.

The pump is a simple hand pump with a lever. Each stroke of the lever draws water from the well up through the tubes and out through the spout. The well itself is dug to about 60 meters, so 9 or 10 pipes, each 6 meters in length and 1.5 inches in diameter, will be needed.

Project Impact
The neighborhood of Papalón, consisting of 33 adults and 60 children, will benefit from the project.

Comments
This project follows up on the successful completion of the Cacahuatalejo Pump Repair Project – El Salvador under the direction of Peace Corps Volunteer Zach Thomas. It demonstrates the value of training villagers in appropriate technology so they can help themselves and their neighbors in the future.

$0.00 – This project has been fully funded, through the generosity of the Elmo Foundation.