Community Description
Orinie is located in the Oldonyonyiokie Hills of Kajiado District. Dotted with thorn brush and acacia, the region is characterized by annual drought; residents go months on end without rain.

Orinie is a Maasai community, home to 2,700 men, women and children. Traditionally the Maasai have been a nomadic people, herding their cows and sheep across Eastern Africa following the rains and building temporary shelters. In the 1980s when the Kenyan government parceled out plots of land, officials gave Maasai the choice to establish settlements and own tracts of land as opposed to living on tribal, communal land. Those who live in Orinie have largely abandoned the transitory nature of their culture, choosing instead to settle permanently in the village.

In the 1990s a school was built and soon after a small health clinic, followed soon after by a handful of shops made of corrugated tin. Most community members live in large homesteads amongst their extended family; each mother stays with her children in her own mud hut amidst a ring of other huts. Homesteads might be home to as many as 50 people.

Nearly all who live in Orinie practice pastoralism, keeping large numbers of goats and cattle, and relying on the animals’ meat and milk for sustenance.

The Orinie Mother-to-Mother Support Group is made up of twenty women from various villages within Orinie who seek to improve the health of their families and the surrounding community. Members have been meeting for two years, focusing on issues such as home hygiene, proper sanitation, healthy weaning habits, good nutrition, and environmental conservation. Most recently they worked to build fuel-efficient stoves in each member’s home using local materials.

Problem Addressed
Because they traditionally moved from place to place, many Maasai communities have not adopted the practice of building pit latrines. While Orinie Primary School has constructed a latrine for its students, and while the local health clinic also has a latrine, the vast majority of families in Orinie do not have toilets. Instead of using designated latrines to relieve themselves, most community members defecate in the open.

As Orinie becomes more and more populated, homesteads that had in the past been great distances apart are being built closer and closer to one another, putting the community at risk for disease. As Maasai lifestyles have shifted away from nomadic patterns, the practice of open defecation has become a dangerous one. 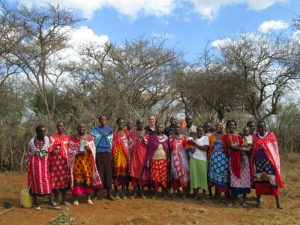 There is no running water in Orinie and as such most women make a daily trek to and from the Ol Kejuado River to fetch water. The combination of practicing open defecation and using an un-protected water source makes for endemic rates of diarrheal diseases. Children are particularly vulnerable. The AIC Orinie Health Clinic reports outbreaks of typhoid each December and April as the onset of the rains washes contaminants into the community’s water source.

Few residents understand and recognize the impact that open-defecation has on the health of the community. Those who do may lack the knowledge or resources to build a pit latrine. The community needs both education on the importance of building toilets and instruction on how to do so.

Project Description
This project is to build 5 pit latrines within Orinie, in Nareto and Orpusare Villages.

The project will be implemented under the direction of the Orinie Mother-to-Mother Support Group.

Each mother will oversee the construction of her own toilet. Upon completion, she will call neighbors and community members for an educational session at her home on the importance of household hygiene and sanitation. In this way, not only will a number of people in the community gain daily access to a pit latrine, but those in surrounding households will have the opportunity to learn about the process and significance of building a toilet.

Water Charity funds will be used to purchase and transport the materials and to hire local tradesmen to build the toilets. The women will purchase 1,200 mud bricks, ten sheets of corrugated metal, and twenty bags of cement. Each woman has demonstrated her investment in the project by digging a 10-foot-deep trench for her family’s toilet.

Project Impact
About 100 people in 5 households will directly benefit from the project.

Comments
This project will improve the health and well-being of the participants and their families. It will also serve as a platform for spreading information about sanitation and hygiene and serve as a model for others to follow.

Dollar Amount Needed
$0.00 – This project has been fully funded through the generosity of the Christopher Lin, of Diamond Bar, CA, USA.

We encourage others to continue to donate using the Donate button below, and we will notify Peace Corps Volunteer Anna Hankins of your donation. Additional funds will be used to fund the next project by Anna and/or those of other PCVs in the country of service.