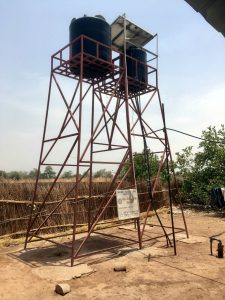 Community Description
Njoben Wolof is a small village located in the Niani district of the Central River Region in the Gambia. The village contains 13 large multi-household compounds that are ethnically Wolof with exception of one Fula compound. Ten of these compounds have access to potable water from a tap system that was constructed in 2017. Three of these compounds have access to and exclusively utilize an open well. There is one tap that is located at the health center outside of the village.

Approximately 300 people reside in the village. Roughly 30% of those are children under 5 years of age.

The village has a chief, a Village Development Chairperson, a Women’s Group that is currently being organized, and several study groups for children who attend local Lower Basic and Basic Cycle schools.

Farming is the main source of livelihood for the people of Njoben Wolof. Primary crops grown are coos and groundnut. Despite the presence of an existing tap system in the village for most compounds, there is a large focus on gardening outside the village near naturally occurring tributaries of water due to a lack of consistent water availability in the village.

The health post provides medical care for over 20 villages in the Niani district of the Central River Region as well as neighboring communities in Senegal. It has outpatient, inpatient, and labor wards, as well as 4 full-time staff who live on its grounds

Problem Addressed
There are four taps within the village that are all within a 100-meter radius of a centrally located borehole from which water is pulled. Since the construction of the tap system in 2017, community members have expressed concern that the current means for storing water (one 4,000 L tank) is insufficient for the people who rely on the system for their water needs. 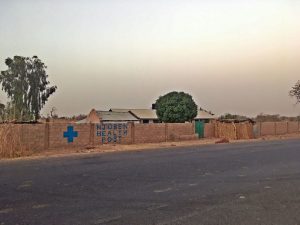 Water often runs out during peak fetching hours as neighboring villages often rely on the water system. Water is never available between the hours of 7 PM and 8 AM when solar panels that power the pump are non-operational.

Within the three compounds that do not regularly fetch water from taps, interviewees (women and girls who are responsible for fetching water) stated that they exclusively fetch water from the open well because the amount of water needed to meet each family’s demand, together with the distance from their compounds to the nearest tap, does not make it a feasible option for them. Moreover, taps were not established at these compounds when the water system in Njoben was being renovated in 2017 because the topography of the land and distance from the borehole made it physically and financially impossible.

As a result of drinking open well water, interviewees from these compounds stated that at least one child in their compound had suffered from diarrhea within the week prior and ranked diarrheal disease as one of their main concerns.

Project Description
This project is to build a water storage tank and tower and extend the water system to reach 3 additional compounds.

The following activities will be implemented:

(1) Provide Njoben Wolof with an additional 4,000 L water storage tank and the metal tower that will be installed alongside the existing tap system to increase water available to villagers throughout the day, and
(2) Extend the water system from the nearby health post to reach the three compounds that currently pull water from the open well so that they are provided an easily accessible source of potable water. 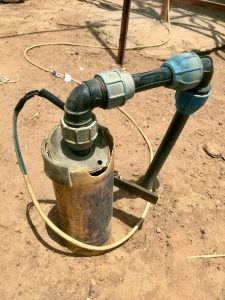 Contractors will dig trenches and install roughly 50 meters of pipe for the installation of 2 taps within close proximity to the three compounds. A new Grundfos pump capable of outputting water to the health post as well as these additional taps will also be fitted onto the health post’s existing water system.

The community’s contribution will largely include manual labor, such as excavation of trenches and laying of pipes to connect the borehole at the clinic to two new taps in the village, as well as providing assistance with labor, lodging, and food to contractors.

An initial fee of 100 Dalasis per adult from the three affected compounds will be collected and contributed to the cost of the installation of the new taps.

Meetings of people that will form a water committee are underway and have been facilitated by PCV counterparts Tamba Sabally and Sader Sey, men from the clinic and the village, respectively

Monitoring and Maintenance
The PCV and counterparts will use the project logic model of intervention to monitor the implementation of the project activities and to track project performance. Similarly, the model will be used to evaluate the immediate outcomes (impacts) of the project as well as the long-term impact of whether the intervention has achieved the expected objectives and goals of the project.

The PCV and counterpart will use Peace Corps water, sanitation, and hygiene data collection tools to collect the relevant figures during the project implementation. The volunteer will also recommend that a replacement volunteer be placed in Njoben following her COS to continue to provide support and monitoring and evaluation. 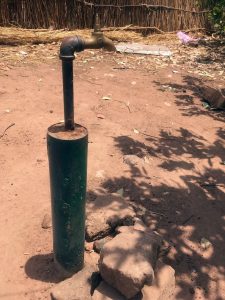 Sustainability of a clean water supply is the goal of this project. The PCV and the counterpart will further implement a Cluster Water Committee that contains adults from the three affected compounds as well as health center staff. These people will be trained on basic financial administration and management procedures similar to those taught to the water committee of Njoben Wolof to ensure financial records are up to date and funds are available to pay for routine maintenance costs at all times.

A constitution for the committee will be written and agreed upon by the PCV and members of the Cluster Committee and a bank account will be set up to collect funds from the compounds who subscribe to the tap system being implemented.

Let Girls Learn
This project qualifies as a Let Girls Learn project because the goals are to (1) provide more time for girls to attend school and spend more time studying due to a decrease in the amount of time it currently takes to fetch water, (2) increase rates of school attendance for both boys and girls because rates of diarrheal diseases will decrease, (3) improve health among all members of the community due to access of clean water for drinking and cooking.

Project Funding
Although the funds to get this project underway have been provided by an anonymous donor, we continue to accept donations so that we will have funds on hand for the next project in The Gambia. Please use this Donate button, and your donation will be attributed to this project and the Peace Corps Volunteer will be notified.