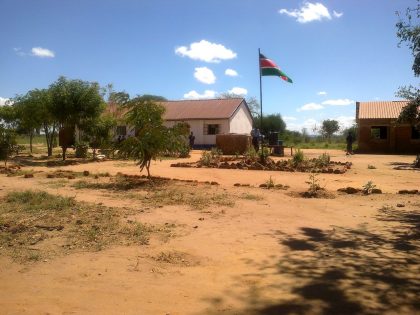 Community Description
Kyanguli is a very small village, located approximately 16 km off the main highway between Nairobi and Mombasa. Once part of the large Tsavo game reserve, the area has seen a dramatic increase in population in the past decade. This has led to widespread deforestation and exposed the once fertile soil to soil erosion.

The area receives little rainfall (it has rained only a handful of times in the past 8 months), and water becomes scarce in the dry season. In an area where subsistence farming is the most common form of income generation, every drop of water counts.

Kyanguli Secondary school is a new school in the area, open for less than 5 years, which has seen the population triple in recent years. With the influx of students, the demand for water has also risen. 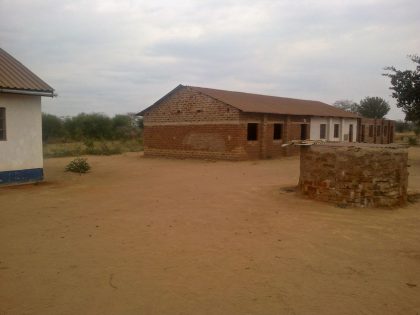 In past years, the principal was able to fund piped water from a tank roughly 2 km away to the school. A small storage tank was built to store water when the county rations water in the area. However, a recent pipe burst has shut off the water for a week, causing the school to go to its reserves.

The condition of the water tank is very poor, and recently some of the many lizards fell victim to the water, drowning and contaminating the water reserves.

The school has been forced to buy water, which adds a significant cost burden to the school. Additionally, the water is brought from hand-dug wells in a riverbed, and is very dirty, and results in many sick students.

Project Description
This project is to build a rainwater harvesting system to provide water for drinking and irrigation of the school’s crops and trees. 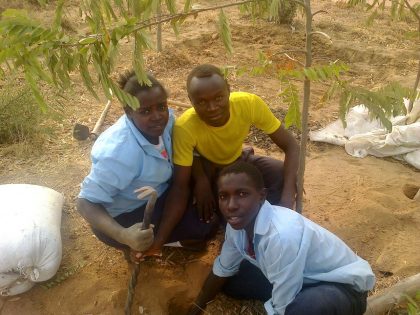 A 5,000-liter polyethylene Kentank will be purchased and transported to the site. The tank will be placed between two existing classroom buildings. The system will make use of existing gutters, which will be supplemented with an additional 10 meters of guttering.

Below the water outlet, a cement trough will be created, so any waste water, such as from cleaning of bowls and plates, can be collected and used to water the surrounding crops.

The school has recently employed two fundis (workers) who have assisted in the building of a new staffroom, creation and improvement of boarding facilities, as well as general repairs around the school compound. They are skilled masons, and are parents of students at the school. Any additional unskilled labor will come from local community members, as well as students.

The community and school will provide some building materials, such as bricks, build the tanks base, and pay for any overage.

Water Charity funds will be used to purchase and transport the remaining materials as well as pay the workers.

Water will be treated as needed. Excess water and crops produced at the school will be sold to the community.

Project Impact
This project will directly benefit 150 students, as well as the teaching and school staff. 500 additional people will indirectly benefit from the project.

Comments
The system will reduce waterborne illnesses that currently plague the area due to the consumption of dirty water.

The solution will save the school from having to purchase water, allowing resources to be better spent for other projects or educational materials.

Dollar Amount Needed
$0.00 – This project has now been fully funded through the generosity of Scott Hess, of Boise, ID, USA, with the help of other friends and family of Peace Corps Volunteer Peter Hess.

We encourage others to continue to donate using the Donate button below, and we will notify Peter of your donation. Additional funds will be used to fund the next project by Peter and/or those of other PCVs in the country of service.