Community Description
Ilela Village is located in the region of Ruvuma, in the district of Mbinga. Prior to the founding of Ilela in 1976, there existed two neighboring villages named Mikalanga and Malindino, both of which were founded in 1974. Thereafter, Ilela was founded by a consortium of farmers, and Ilela, Mikalanga, and Malindino formed a single ward, known as Mikalanga.

Problem Addressed
In the Ilela Village Dispensary Water Project – Tanzania, access was established to a safe source of water at the village dispensary.

In the Ilela Village Water System Project – Tanzania, a cement water intake was repaired and the dam at the top of Kitessa Forest (the mountain range which borders the village to the west) was reinforced.

Water presently travels from the cement water intake at Kitessa Forest through central piping to a primary cement water tank. This tank is uncovered, and acts as a breeding ground for mosquitoes and other insects. From this primary tank, secondary piping disperses the water throughout the village to various water faucet stations, where water is not stored, but rather collects in stagnant pools throughout the village.

The school remains without an adequate and reliable source of water.

Project Description
This project is to build a water catchment and storage system for the school.

The system will include a raised platform, a 2,000-liter water tank, and piping between the Kitessa Forest water source and the school. 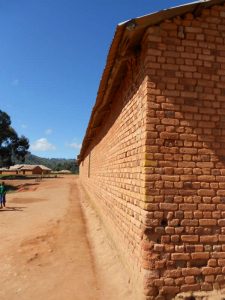 The platform to raise the tank from the ground will be six feet in length and width, comprised of bricks and cement and will include a water catchment system using iron sheeting.

Water Charity funds will be used for materials, including cement, and for skilled labor.

The village will contribute the bricks and partial labor costs. The District Medical Officer in Mbinga will provide the transport of the tank.

Project Impact
This project will benefit 471 students at the school.

Comments
This tank and the one at the dispensary will provide independent water sources for the institutions, allowing the village to retire the deteriorated cement water tank near the entrance of the village.

This third step in the overall water system will reduce disease (most notably malaria) through the reduction of standing water, and re-distribute village water sources for localized use and ease of maintenance. 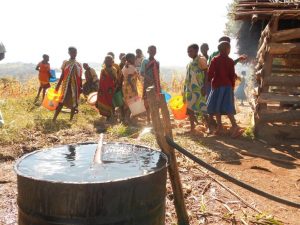 ADOPT THIS PROJECT BY CONTRIBUTING THE DOLLAR AMOUNT NEEDED BELOW
Donations of any amount will be appreciated. The full amount will give you “naming rights”, if that is something you would like.

Any contributions in excess of the Dollar Amount of the Project will be allocated to other projects directed by this PCV and/or projects of other PCVs in this country.
This project has been finished. To read about the conclusion of the project, CLICK HERE.