Ferro-Cement Tanks for the Dominican Republic and Haiti Program

Ferro-Cement Tanks for the Dominican Republic and Haiti Program

Water Charity is pleased to announce our largest and most comprehensive endeavor since we began operation in 2008. The project will result in the construction of three or four ferro-cement tanks for the storage of water at needed locations in the Dominican Republic, followed by at least eight such tanks in Haiti.

We will present the initial concept here, and update it as it progresses. Individual projects under this master concept will be developed and presented separately.

This is a program that we have developed from the ground up after identifying a critical need. In our prior operations, we have sought individual projects that have arisen from specific communities, and have worked to assist in their implementation. In contrast, in this comprehensive program, we have identified widespread generalized need, and have designed a radical new methodology for delivering services to a multitude of communities suffering from a shortage of potable water. 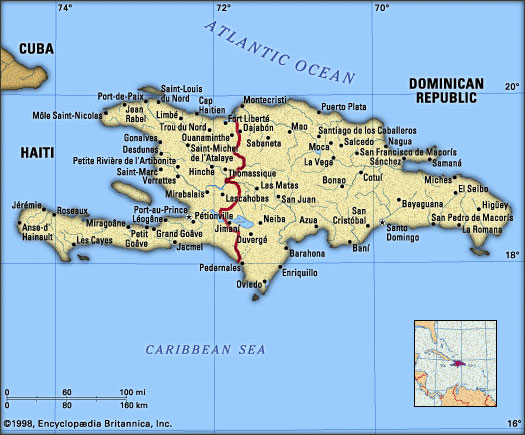 In its simplest form, the concept can be described as follows:

Background
The concept arose in an indirect way to accomplish a needed task. Water Charity had undertaken some small projects in Haiti as part of the relief effort after the earthquake. In the course of this, it was recognized that a more substantial long-range development effort needed to be undertaken. The necessity for water storage was seen to be critical in many locations.

At the same time, we had been working with Peace Corps staff in the Dominican Republic on several projects. We learned that they were implementing ferro-cement technology, and were proceeding to train Peace Corps Volunteers in the processes to build the tanks.

The Peace Corps does not have a presence in Haiti. Regulations did not allow Dominican Republic PCVs to travel to Haiti. The idea was born that these trained Volunteers could train Haitians within the Dominican Republic, who would then go back to their country and build tanks.

The Tanks in Haiti
The tanks completed are as follows:

The Funding
This program became possible in March, 2010, when Water Charity made a presentation of the concept to the ANON Foundation, a Southern California philanthropic organization. What was sought was an endorsement of the concept and a commitment that they would match the contributions of other donors to accomplish the stated mission. Although immediate dollars were not available, we obtained a commitment that sufficient funds will be raised at a fundraiser that they have planned for November, 2010.

The above commitment from ANON, together with the ongoing support of Six Senses Resorts & Spas, was sufficient to allow Water Charity to move forward with the plan and commit its own funds to implement the program, and we set the process in motion.

Every large-scale donor has different requirements and procedures. Some donors have a 45 day review process. Others have money available right away, but have very specific criteria as to location, scope, and benefit.

In view of the conflicting review processes, we determined that this major concept will proceed as a hybrid. Each individual tank will be “sold” as an individual stand-alone project. Each of the tanks so constructed will come under the general methodology developed for the comprehensive plan.

The Technology
Ferro-cement tanks are a reliable and effective way to store large quantities of water for community use. Tanks ranging from 11,000 to 50,000 liters in capacity are custom-built as needed, using readily available materials.

The process entails erecting a structural form of steel wire mesh, covered by layers of cement. The necessary valves and piping are installed as part of the construction.

The process of layering the cement takes about 4 or 5 days, to allow for proper drying and testing. The finished tank can be filled from any available source. The contents of the tank can be purified as needed.

The Benefit
It is estimated that the tanks constructed in the Dominican Republic will serve 1,700 people in fixed communities.

The 8 tanks to be constructed in Haiti, involving a more migrant population, will serve upwards of 4,000 people.

The program is totally scalable, and will result in trained technicians being available to continue to build tanks as needed in Haiti.

Huge benefit is achieved through the volunteer labor provided by the PCVs. Tools need only be purchased once. The trained become trainers. Skills are developed to sequentially build larger tanks, which cost only incrementally more but are much more cost-effective.

Most importantly, a skilled group of Haitian nationals will be available to carry the project forward by implementing it in needed locations in Haiti.

The Plea
We are soliciting funding for the overall concept. At the same time, we are seeking individual donors and partners to participate in the construction of the specific units.

ANON will match donations, so funders will be able to multiply the impact of their contributions.

We have received a commitment from The Soneva SLOW LIFE Trust to provide matching funds for the program as well.

We have received a generous donation of $2,000 from Justin Lazard, of New York, USA. These funds will be used for the construction of ferro-cement tanks in Haiti.

Cody Matherne has started an effort, called Race for Water, to raise funds for this project. If you wish for your donation to be credited toward Cody’s fundraising effort, please click on the specially-coded Donate button below.

If you wish to take part in this new and challenging program, please send an email to our COO, Averill Strasser, at mail@watercharity.com, outlining how you would like to help.