Water Charity is pleased to have this be our very first project in Gabon!

Community Description
Doumandzou is a small village of about 250 people in the Woleu-Ntem province in northwestern Gabon, about 10 miles from the border with Equatorial Guinea.  The 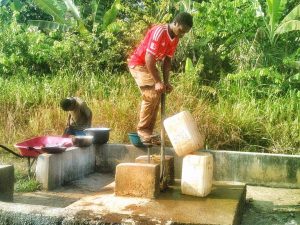 nearest large town is only about 45 miles away, but conditions of the road turn that distance into a 90-minute drive.  Doumandzou is in the full tropical rain forest with two rainy seasons from September to December and from February to May. The community has a self-sufficient agricultural base, with a few farmers able to sell their products to a larger market.  There is a working well and pump to provide water to the village.

Several wealthier residents operate generators in the evenings that help power the growing use of cell phones across the entire village.  Within the past five years, a new health clinic has opened with a full-time nurse.  There are no stores to speak of in the village, but there are two small bars that operate out of two residents’ homes.

In 1965, Peace Corps volunteers constructed a three-classroom primary school and three teachers’ houses, with two latrines, one for the teachers and one for the students.

A group of five volunteers (including three RPCVs) lived in Doumandzou for six weeks in early 2015 as they set about repairing the primary school.  The villagers lived up to the reputation in the region for hospitality and were extremely generous and welcoming over that period.  Two residents in cement block homes provided lodging.  Villagers shared food from their gardens and provided volunteer labor for the repair of the school. The school, along with the new-staffed health clinic, will reverse the trend of population loss. 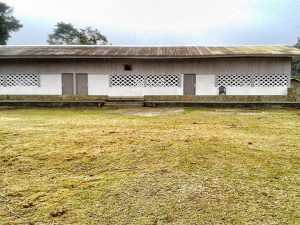 Problem Addressed
Several issues dominate the village, including isolation and economic opportunity, but two stand out for this project.  First is its loss of population.  In the past three decades, the population has moved away from the village in search of jobs, but also for closer access to basic health and educational facilities. With the deteriorating condition of the school and the teachers’ houses, it was difficult to recruit and maintain teachers, and the school had been closed for as long as a year on several occasions over the past 20 years.  Parents sent their children to neighboring communities to stay with relatives in order to ensure prolonged schooling.  With the school renovations completed in February 2015, the village was already at the start of the new school year in September.  There was an increase in the number of students, and a full-time teacher with clean, solid housing.

The second issue is sanitation, particularly for school.  During the 2015 school renovation, the volunteers recovered two latrines that Peace Corps Volunteers had built-in 1965 that had been taken over by forest growth, one for the students and one for the teachers.  Both were structurally sound, but only the latrine for the teachers appeared to be still in use by residents since there was a path through the forest to the doors.  The student latrine with two stalls was full and unused.

There are no facilities at all for students.  With a couple of notable exceptions, most residents have makeshift outdoor latrines with little provision for healthy sanitation practices.

Project Description
This project comprises the construction of two latrines for the students of Doumandzou’s newly renovated primary school, plus integrated sanitary handwashing

stations. Taking advantage of simple and proven designs, the project will create latrines that are safe, convenient, easily cleaned, and odor-free. These toilets, in conjunction with the handwashing stations, will enhance and promote personal hygiene in the school and surrounding village. The two components of the project are detailed below.

Latrines: The selected technology is the well-known Ventilated Improved Pit (VIP) latrine with construction details borrowed from a CARE design proven during the building of 1,400 latrines in Zambia. In order to assure an appropriate environment for girls and boys, two single-stall latrines will be built.  They will be separated from each other and from the school by approximately 20 meters.  For each latrine, a pit 3 m deep will be dug and lined with 10 cm cement blocks. The reinforced cement slab used to seal the pit will have a drop hole and footrests designed to minimize fecal contamination.

A second hole in the rear of the slab will house the VIP ventilation pipe that provides fly and odor control. Shelter walls will be built on top of the slab using a 10 cm block and will include a labyrinth-style, no-hands entryway. A simple sloped aluminum roof will cap the shelter, with gutters attached to capture rainwater for the handwashing station. Based on the size of the pit, the materials of construction, and the number of students using the latrines, the facility should last 20 years.

Encore de la Paix, a social action arm for the Friends of Gabon, an affiliate group of the National Peace Corps Association will work with the villagers to complete the project.

The villagers of Doumandzou have committed to digging the two latrine pits and making the required cement blocks prior to the arrival of the Encore de la Paix volunteers. The latrines will be sited north of the school building near the edge of the cleared school terrain.

Handwashing station: A simple station for handwashing will be constructed for each latrine. The selected technology mimics the Tippy-Tap, a simple design allowing hands-free washing. A several-liter reservoir suspended from wooden poles is tipped by foot lever to slowly dispense washing water. Bar soap is tied to the poles. School teachers will assign the task of filling the reservoir daily and providing soap monthly, to a rotating list of students. During the rainy season, roof runoff will supply the needed water; at other times of the year, assigned students will carry water to the school. While this technology is not particularly durable, the required materials are available locally, so that once the stations are demonstrated, they are likely to be maintained or rebuilt by students or villagers as needed.

Project Impact
This project will impact 285 people directly, including 35 students yearly (with enrollment growing to 50 at times) and the 250 people of the village, who will have access. 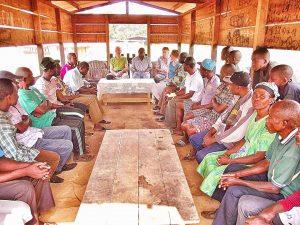 Monitoring and Maintenance
While the school staff will be responsible for daily monitoring and maintenance of the latrines, Encore de la Paix is working closely with a Returned Peace Corps Volunteer who lives in the capitol and has extensive contacts in this region.  He will be procuring the materials ahead of their arrival and contracting with skilled labor.  He is also the on-the-ground liaison with the village association and the parents’ association from the school.  The President of the village association is a retired regional director for the Ministry of Health; he owns a home in the village and makes regular visits between the capital and Doumandzou.

Encore de la Paix will coordinate with the school principal and the health clinic nurse on follow-up activities to ensure re-supply of the water (during the brief time when school is in session during the dry season) and of materials for annual cleansing.  Regular visits by the President of the village association and annual visits by the American coordinator based in Libreville will support on-going monitoring and maintenance. The latrine will be completed before mid-April when the American volunteers depart.

Comments
The Association of People Of The Village Doumandzou will provide community involvement.

Encore de la Paix is a group of Gabon RPCVs, a service arm with Friends of Gabon, an affiliate group of the National Peace Corps Association. John Dickson reports:

Peace Corps closed its operations in Gabon in 2005, but are 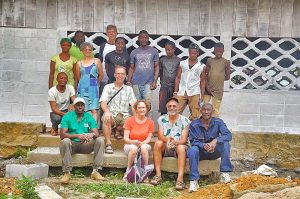 now conducting an assessment with the plan to return in 2016-7.  When the group of five Encore de la Paix volunteers worked with the village of Doumandzou to repair the school earlier in 2015, we were surprised at how the villagers remembered by name the first group of Peace Corps volunteers who had built the school in 1965.  The group of seven young men had only stayed in the village for seven months to complete the school, but they left a lasting impression.  We met several graduates of this school, including the man who went on to become a regional director at the Ministry of Health, another who was a parliamentarian, a policeman, as well as several who stayed in the village and recalled their school days fondly. It was not uncommon that, while we were working on the school, villagers would come by to watch, to lend a hand, or to offer products from their gardens.

At times, we would glance into the classrooms and catch school-age children sitting at the new desks, admiring and anticipating the day when the classrooms would be ready for use. All this reminded us of the importance of the school, and now the latrine, but also the importance of reconnecting with the Gabonese, of working and living side-by-side with our hosts, and making new friendships.

Building latrines in Doumandzou lines up precisely with the Let Girls Learn Project in that it will provide all students, but especially girls, with a clean, comfortable place to meet their sanitary needs while continuing to stay in school.  School ages vary widely in Gabon; as students enter formal education late, interrupt their schooling for a year or two before returning.  This results in a wide range of students enrolled at this primary school.

There are girls who have already reached puberty sitting alongside others who are about to enter puberty and others who are far from that stage.  The older girls who have lost school years face several obstacles in continuing.  Not only are they embarrassed to be sitting side by side the younger girls, but also the lack of facilities causes them to lose even more school.  However, new sanitary facilities can make it easier on them to continue, and they can even be enlisted to discuss sanitary practices with the younger girls. Finally, we hope to work with the nurse at the village clinic to provide basic instruction in sanitary practices for the school-age girls.

This project is being paid for through the support of an anonymous donor.  If you would like to see more projects like this, please donate to our Western Africa Water & Sanitation Program. 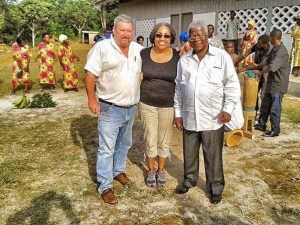