The project was to build a three-stall latrine, two for students, and one for teachers, with running water for handwashing. 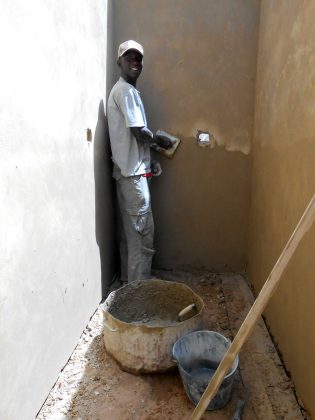 The Tawa Fall Elementary School now has a bathroom with running water!
On a recent July morning, school parents and local farmer Ibu Diakhate unlocked the new three-stall bathroom, turned on the brass spigot, and smiled, as a steady stream of water splashed into a concrete and tile-chips sink. The construction was finished during the last week of the school year, and students and teachers showed up for a celebratory photograph holding signs saying “Thank You America!”

The bathroom was built via a substantial grant from contributors to Peace Corps Partnerships Program and Water Charity.

The month-long construction process began with a team of locals making, by hand, enough cement cinder blocks to comprise the building’s outer and inner walls, and a large in-ground square, comprising the latrine. Several large boulders had to be removed from the latrine area. After the walls went up, inside walls were covered with cement, and porcelain fixtures (“Turkish toilets”) were set in the floor of three stalls, (two small and one large, for the teachers). Doors were hung, the roof was braced, and corrugated steel was attached as a cover. Broken tiles (a common feature in Senegal) were laid in cement as flooring and steps, and then the place received several layers of waterproof paint, both inside and out. 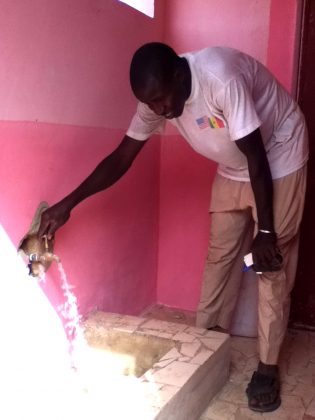 Pink was chosen as the building’s color to honor the Peace Corps volunteer managing the grant for the building. They thought it was her favorite color, they explained, when she asked about the decision. When she told them she had been joking when she suggested pink, they replied, “Oh, well. That’s the only color they had in the store so that’s what we got.”

Just as painting was reaching conclusion, the committee realized that having underestimated the amount of cement needed, it had spent the money slated for piping that would bring water from the nearest spigot. But Water Charity stepped up and saved the day. A second appeal was made to Water Charity, and the necessary funds were on their way. The bathroom would have water after all!

We are grateful to Karen for completing this project. We were pleased to visit with Karen on our recent trip to Senegal and see firsthand the awesome work she is doing! 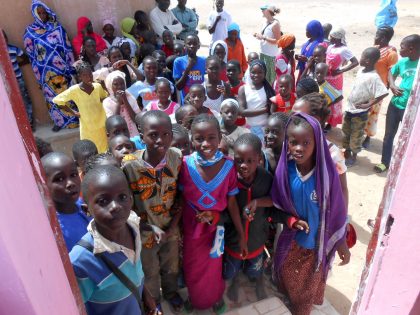 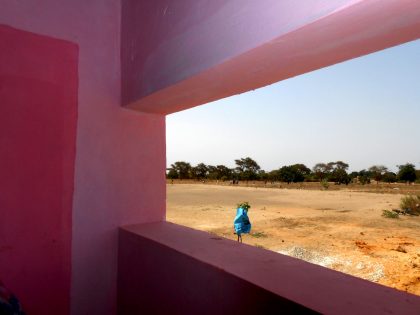