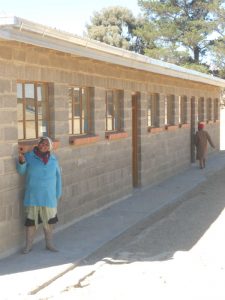 This project has been completed under the direction of Peace Corps Volunteer James Kruger.

The project was to construct a rainwater catchment system at the school.

The project was a tremendous success. Soon after we received the requested funds, we purchased all needed materials to begin work. The hardware store Boloka provided free transport of the materials to the village.

The next week the materials were moved to the exact site of the project. While two young men in the village spearheaded the project, many other people were involved in some capacity.

First, a hole was made near the bottom of the existing tank. This was done with a hammer and chisel, and took quite a bit of effort. Then a pipe was installed and sealed with a cement mix. Afterwards, a tap was connected to the pipe.

Then the tank was covered with metal sheets and again sealed with a cement mix. A small hole was left for a gutter to enter through the roof.

Next, gutters were installed on three sides of the building and secured with nails. Water was poured into the gutters to ensure the water passed into the tank. Finally a lock was installed onto the tap as a security measure.

The keys to the lock were presented to the school principal and deputy principal. The project was completed in approximately three weeks. Because it was still the rainy season, the school and community were able to benefit from the project right away. Immediately after its completion, students could be seen washing their hands and cleaning their lunchboxes at the tank.

The principal and deputy principal have praised the tank as a valuable resource for the school. More than six months later and the tank is still working perfectly. The school and community are awaiting the start of the rainy season so that they can make use of the tank again.

We are grateful to James for completing the project, and again wish to thank the Paul Bechtner Foundation and James’ friends and family for providing the funding. 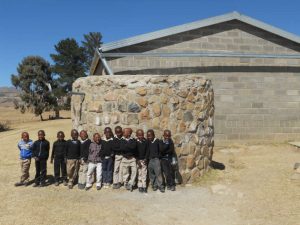 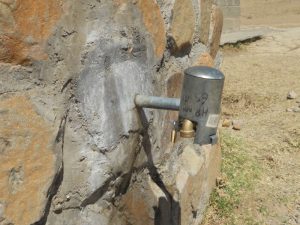