This project has been completed under the direction of Peace Corps Volunteer Laura Hobbs. 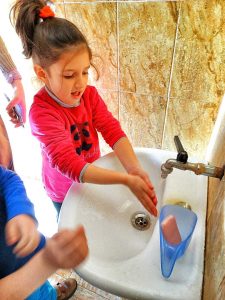 SCOPE/PROCESS:
In conjunction with the Office of Health Promotion in the Directory of Public Health Pukë, Laura originally planned on submitting a grant for oral hygiene lessons and materials for the 9-vjeçare. However, when she and her office went to assess the likelihood of this grant with the school, it was discovered that their bathrooms were not in working order. Even though there was running water, there were no sinks or toilet cisterns to access the running water. Therefore, janitors would bucket flush the toilets at the end of the day and students did not wash their hands. We decided that we need to address this problem before we could attempt to address oral hygiene.

Upon receipt of the funds in November, 2015, I began coordinating with the Bashkia for when the bathrooms could be installed. Due to a working project the Bashkia had going on, the workers were not available until December, 2015. The first round of school bathrooms (16 total stalls and 4 sinks) were installed in December of 2015.

In early January, we began the educational phase of the project in conjunction with the Directory of Public Health Pukë. In two groups, six nurses from the Health Promotion Office taught students from Grades K-8 about personal hygiene, microbes, flu season, and hand washing. This was done over the course of two weeks, and students who participated in a microbial experiment were overseen directly while they washed their hands to ensure that the lesson’s goal was achieved. 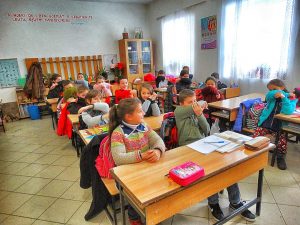 Once the first component was completed, I emailed Water Charity to acquire approval for a project expansion to complete an extra bathroom in the school. Water Charity and the Small Grants Committee approved this extension, with the second stage of bathroom refurbishments totaling 26050 ALL. Further, the Committee approved the usage of any leftover money to go towards extra cleaning materials to supplement those being supplied by the Bashkia.

GOALS:
The first goal of students properly using the refurbished bathrooms to promote a cleaner learning environment was very successful, due to the expansion of the objective to teach students about hand washing.

The original objective only states that students in grades 1-3 would be taught lessons, but this was expanded to grades K-8. This serves a wider base of students and ensures that every student using the bathrooms do so properly. The skill building of the students during these lessons was an important component of the project. We taught a total of 265 students from grades 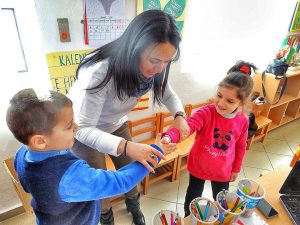 The installation took place in December and the education component in January. This timeline was pushed back because the grant was received after the original timeline had already passed, and winter break interrupted the student’s teaching schedule.

Overall, the community feeling is extremely positive. On February 20th, parents attended students’ final class of the day for teacher-parent meetings, and many were very pleased with the changes made. One parent of a 4th grade girl was thrilled that the “entry hall and first floor no longer smell like bathrooms and waste,” and that “the bathrooms are so clean,” even she would use them! 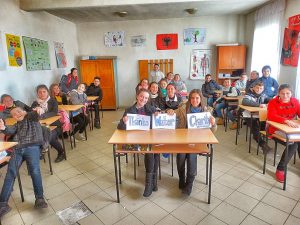 SUSTAINABILITY
The project will be monitored by Randolph Kent, a current volunteer in the 9-vjecare, as well as by the school director. We have agreed with the bashkia that if repairs become necessary, they will make them out of pocket. Therefore, if Randolph (or the school director) finds something in the bathroom to need repairs, they can be notified and the bathroom monitored until the repair is made.

In terms of sustainability of proper student usage, the Directory of Public Health, Health Promotion Team makes yearly trips to the school during flu season to teach about the importance of handwashing and hygiene. This ensures that even new students will be a part of the health curriculum each year and use the restrooms properly. Further, a school initiative where students bring one bar of soap in at the beginning of the school year will ensure that there are still bathroom supplies for hand washing once those donated by the Bashkia have run out.

We would like to thank Laura once again for executing such a fine project. 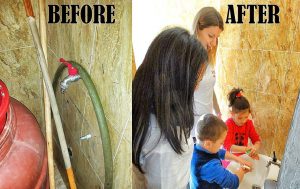