This project has been completed under the direction of Peace Corps Volunteer Kathryn Harrawood.

I am pleased to report that the Ngar Gueye Latrine Project has been successfully completed in Senegal, West Africa. 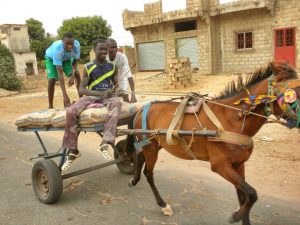 The latrine project provided 10 households in Ngar Gueye with new long-lasting latrines and water hygiene and sanitation education. The first step was holding a village meeting to asses which compounds would participate, which was accomplished based on expressed interest and a randomized lottery. Of the ten households that were chosen, five had no pre-existing latrine structure whatsoever and the other five had simple, short-term latrines.

Representatives of each household tied up their horse and donkey-drawn carts and traveled 7 km to the closest hardware store to pick up the 64 sacks of cement and iron rebar purchased with funds provided by Water Charity. Then they gathered a mountain of sand to mix the cement and gravel for the latrine covers. Over the next few days, brick makers mixed cement and set over 1,000 bricks while each household dug their own pits – two meters each way. When the bricks had dried, the head of each household paid for the underground pits to be constructed and then covered with large cement slabs.

The scope of the project planned by myself and my two counterparts ended here: a well-constructed latrine with a concrete slab cover and a simple concrete footrest. I invited participants who wanted to add on to the project do to so, which resulted finally in a large variety of latrine types. Some houses purchased porcelain basins for their latrines, some houses built up concrete walls and a roof over their latrines, and some even invested in basic plumbing systems. I am happy to report that each household oversaw and participated in the construction process so thoroughly that everyone ended up with exactly the type of latrine they desired.

During the construction process, I made frequent visits to each household to oversee each step of the process. Nearing the end of the construction phase, I visited each house with a local health worker and led a demonstration and discussion of water and sanitation hygiene practices. The discussion included the link between illness and hygiene, motivating families to care about improved sanitation practices, while the demonstration called upon men, women, and children to display their knowledge of thorough hand washing. 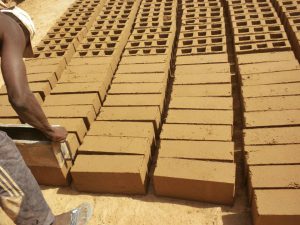 Ultimately, the tangible end result of the project was ten new latrines that are accessible to 122 community members. I hope that the sanitation education alongside the reduction in the practice of open defecation will positively impact the health status of the community. Specifically, I hope that the instances of diarrheal disease will decrease in the population of children under five, ensuring that kids are healthy enough to grow into adults.
The community was very happy with me, Peace Corps, and Water Charity for supporting the latrine project. I, in turn, was pleased with the large community contribution to the project and the dedication participants demonstrated. A big jerejef (thank you) from myself and the people of Ngar Gueye.
I have attached photos from the progression of the latrines, from transporting supplies to two water kettles perched atop a finished and functioning latrine. I included one of my favorite photos of goat tracks imprinted in an almost-complete latrine at my neighbor’s house.

Again, thank you for all that you did to support this project. Let me know if there is any other information you’d like from me.

We would like to thank Kathryn once again for executing such a fine project, and we would also like to thank her friends and family, whose support and contributions also helped make this possible.