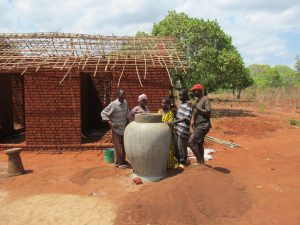 This project has been completed under the direction of Peace Corps Volunteer Stephanie Chilcote.

The project was to build water storage jugs and related rainwater catchment systems throughout the village.

As a result of the funds provided by Water Charity, ten 600-liter water jars were constructed, using burlap sacks filled with sand that cement was spread over. After the cement hardened, the sand and sacks were removed.

These cement jars are large enough to supply a family with clean drinking water for the dry season, roughly 5 months. Normally families would have to pay at the village water pump or walk several kilometers into the farmland to collect water. The farm water, the most common source, is usually milky white and far from clean. Now these families can collect safe water at their homes and teach others the importance of safe drinking water and how easy it is to build a water jar or use pipe gutters.

The original three masons were replaced after the second training due to political differences with the water committee, and two new masons were found to continue the work. This meant that three of the original planned water jars were not built, because the new masons preferred money over water jars. However this reduced the amount of cement needed for the project. As a result of the change, a total of five professionals are now trained to build the water jars along with the laymen who assisted in construction.

Each construction took the form of a training. On average, 20 people came and discussed the new technology with the masons and the families, who are also members of the village water committee, and a representative of the eight sub-villages, so the trainings were equally distributed throughout Nanjota.

With 20 people at each training and their families factored in, over 1,000 people learned about this technology. Rainwater catchment has been taught as a source of clean water, and simple and cheap technology, such as water jars and pipe gutters, has been highly encouraged in the village.

In the end, the budget exceeded the project funds by 15,000 Tsh due to the change of masons and their increased fee, but the difference was covered by the village water committee in a show of support for the water jar technology. They also provided food for the masons, which was not included on the budget.

Nanjota would like to thank Water Charity for facilitating the donations, and they hope for continued projects together.

We at Water Charity are grateful to Stephanie for completing the project, and again extend our thanks to Michael and Carla Boyle for providing the funding. 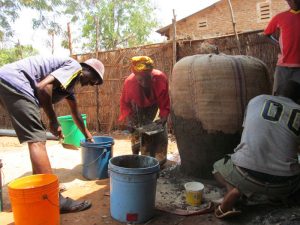 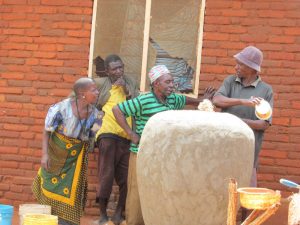