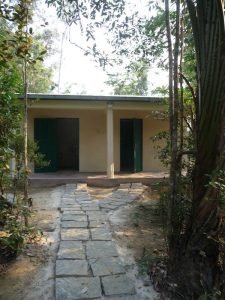 This project has been completed under the direction of Peace Corps Volunteer Elsie Black.

The project was to build a bathroom facility with 3 toilets, 3 urinals, and 3 sinks.

The new bathroom facility was finished in time for the 2013 tourist season! It has since served over 1,300 tourists, plus the many groups and organization that hold meetings and conferences at Mitsinjo.

The funding from Water Charity was used to buy the toilets, sinks, lighting, and cement for the building; the rest came from funds generated from ecotourism. Without that, Mitsinjo would have only had the funds to build an outhouse and not a proper toilet.

The construction of this facility has allowed the association to receive larger groups, the revenue from which funds their development and conservation activities.

While Mitsinjo for years had plans to build a new bathroom, it was always on the back burner. When they received the funds from Water Charity, there was a concerted effort to get the building built, and to do it well and quickly. 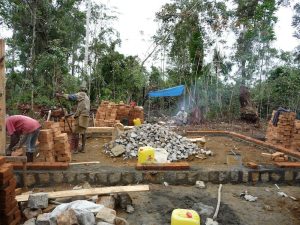 Members of the association voted to spend the extra money and build a well with a pump so that they no longer need to carry water to fill the cistern, ensuring a constant supply of water!

The labor was provided by members of the association and the bricks and rocks are from local sources. There was a delay due to a death in the family of the mason, but nonetheless it was finished in record time.

It is a source of pride for the association to now have a nice and clean bathroom that can serve their clients, visiting students, campers, and their staff, and is a huge step on their way to becoming a serious competitor in the ecotourism sector.

We extend our thanks to Elsie for completing this project, and again express our gratitude to the Paul Bechtner Foundation for providing the funding. 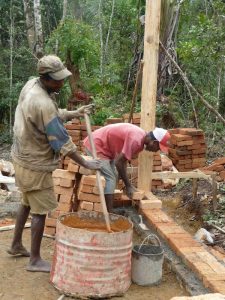 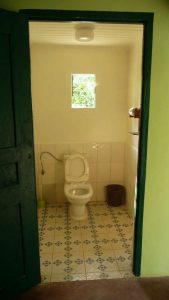