This project has been completed under the direction of Peace Corps Volunteer Alexia Kime.

The project was to improve the well and build a basin to provide adequate water supply and storage for the women’s garden.

I am pleased to inform you that the Mamadou Badjefa Women’s Garden Well Project in Senegal is completed.

In the beginning of April two masons were hired to deepen the women’s garden well of Mamadou Badjefa. Due to hitting rock and intermittent work before the rains, only 4 meters instead of the estimated 10 were dug. The masons dug with the help of hand tools, including pick axes, shovels and buckets. This depth appears to be adequate.

Additionally, as less money was spent on this end of the project, and due to the positioning of the well paired with the size of the garden, I was advised by Peace Corps to construct 2 basins instead of only one. With locations at suitable distances from the well, this now allows for a more than adequate water access to the entire garden.

Mid-April construction of the basins was begun, and all work was completed May 25. The current feeder basin was remodeled to make it an effective reservoir. An additional feeder basin was also constructed for the second basin. As an experiment to test whether one way works better than the other, the basin and feeder basin pairs were constructed slightly differently. 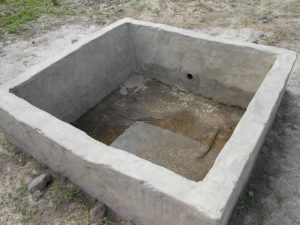 Most of the supplies were transported from the closest city, Kolda, but more accessible supplies such as cement were purchased nearby. The two masons and their assistants were paid for their labors, while the women’s group contributed piles of rock and sand, along with helping to pull water and dirt from the well.

With such improved access to water, the women gardening have a greater chance of growing crops successfully, along with less to worry about financially in the upcoming year. In the last 6 weeks, the women’s group has begun collecting money to save for next year. I will be working with the women to use this money in such a way as to increase crop diversity, increase sources of nutrition, and diversify marketable crops.

Thank you so much for the funding.

We are grateful to Alexia for completing this project, and again thank her friends and family members who contributed. We are still seeking