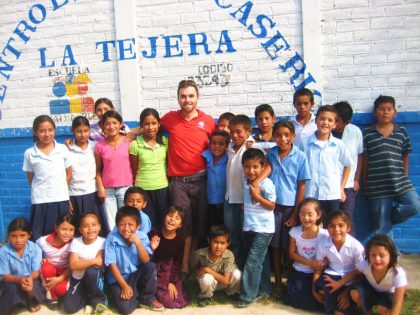 This project has been completed under the direction of Peace Corps Volunteer Daniel Hinkle. To read about the beginning of the project, CLICK HERE.

The project was to complete a modern restroom facility with four flush toilettes at the La Tejera Public School.

We are posting Daniel’s final report in its entirety below, as it is important on a number of levels. It shows the tremendous impact that can be achieved in a community, with a just a modest amount of money, when the efforts are well planned and competently directed. It illustrates that we are not just building a structure, but in addition invigorating an entire community. Finally, it exemplifies the dedication and commitment of our 8,000 Peace Corps Volunteers serving around the world.

It is with great pleasure and pride that I write to inform you about the successful completion of the La Tejera Public School Sanitation Project! The project was successfully completed on March 1st, 2011, approximately one month after receiving funds from Appropriate Projects. I have spent the last week closing out the project with my counterparts: compiling receipts, documenting volunteer work hours, discussing future maintenance, etc. 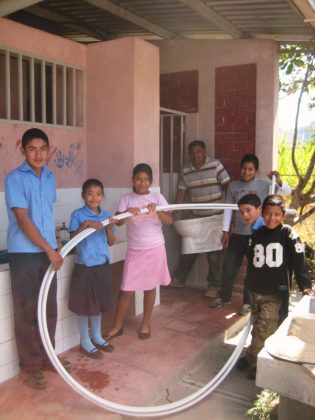 Upon receiving the grant funds, the community of La Tejera sprung to action. The same day we picked up the funds the president of my community’s ADESCO (community development committee) and I purchased all projects’ supplies in San Francisco Gotera and transported them to the public school in La Tejera. The next day the ADESCO and the La Tejera Public School Director convened a community meeting to discuss the project work plan. The community had heard about the project at other meetings and knew it was in the works, but actually seeing the construction supplies and the new toilettes completely energized the community. Community members and parents of school students volunteered to help out by the handful. The month-long deadline was particularly effective in motivating my community to swiftly create volunteer work schedules.

The community broke ground on the project only three days after the purchase of materials. Fathers dug ditches for PVC tubing; a community member donated his time and skill as a welder and plumber, women and mothers donated food and drink for the workers and those families who could not donate labor donated financially to help pay for some of the volunteer labor.

The community’s efforts and the new project caught the eyes of the municipal government, which, encouraged by the community-driven effort, offered to donate funds to pay for volunteer labor, gas for digging machinery and additional construction materials. The municipal government was so impressed by community involvement in the project they agreed to fund a much-needed construction project repairing the school grounds’ concrete border and water irrigation system, which will greatly reduce the grounds’ flooding during the rainy season. This is enormous progress for a community that has often been at odds with the municipal government due to political differences.

PVC tubing was buried and connected to the septic tank and wetlands system at approximately 3 weeks after receiving project funds. New toilettes were installed and connected to the school septic tank during the final week of the project. Students and teachers greeted the inaugural first flush of the toilettes with large smiles and cheers. The new bathroom facility and its flush toilettes will allow the school and its students to discontinue using the unsanitary and overflowing latrines that were prone to flooding and spilling into student play areas during the rainy season. This project will directly contribute to a decrease of the contamination of potable waters with waste in the community and a decrease in the presence of Dengue Fever carrying mosquitoes.

At the final count, 39 community members (community leaders, teachers, fathers, mothers, brothers and sisters) donated 120 hours of collective work hours, labor, food and additional supplies to facilitate and ensure the completion of the project within one month’s time.

Daniel reports on the responses from the community:

The community of La Tejera was incredibly energized by this seemingly simple sanitation project. Both my ADESCO (community development committee) and I were frequently thanked for our work in bringing the project to the community, and asked by a number of community members about how they could help out. This was a huge win for my ADESCO who has for the past several years struggled to bring projects to the community and energize the community at large to participate in local development initiatives. Because this project centered on the community’s children, it helped to diminish old rivalries and political infighting and demonstrated to all involved that only through a united effort can community development succeed. Community members are already asking about our next project and the ADESCO has great plans to capitalize on the goodwill and cooperation generated by the project.

Thankful school children created thank you signs for the project donors and the ADESCO is in the process of drafting an official thank you declaration to Appropriate Projects for their role in enabling this invaluable project.

My community and I cannot thank you enough for the important work you conduct with Peace Corps Volunteers throughout the world. Through something as simple as the installation of toilettes at a public school, you have helped to energize and inspire a community to dream big and tackle their community’s largest challenges and developmental goals with a united front.

We, in turn, wish to thank Daniel for his exemplary planning and implementation of the project. We also again extend our thanks to Gayle Blakeney, with the help of friends and family of Daniel, for providing the funds for the project. 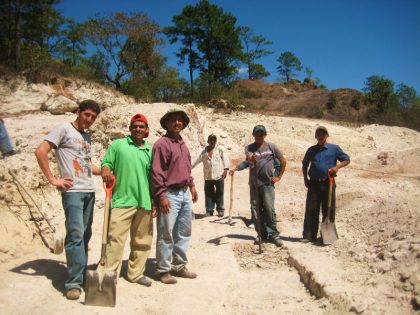 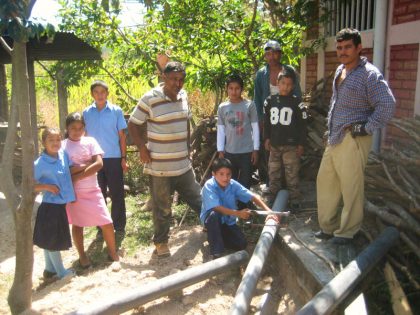