This project has been completed under the direction of Peace Corps Volunteer Jessica Ramsel. To read about the beginning of the project, CLICK HERE.

The project was to bring potable water to the Kiziguro Primary School.

The original project became infeasible, and an alternative approach was designed to provide water for the needs of the school through a rainwater harvesting system. The system involves the use of plastic storage tanks that are readily available and routinely installed in the region, and a guttering system to capture the water from the roofs of the buildings.

Previously, the school had only one rainwater storage tank for its 1,126 primary and 570 secondary students, which had been damaged through its many years of usage. This meant that while there was adequate water during the rainy season, stores would soon run out in the dry season.

Now, the school will be able to collect water through the rainy season for use in the dry season.

We are grateful to Jessica for completing this project, and again wish to thank the Elmo Foundation, with the help of Jessica’s family, for providing the funding. 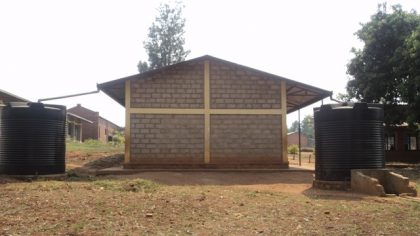 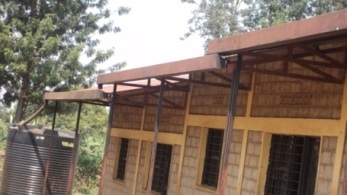