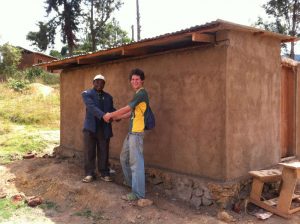 This project has been completed under the direction of Peace Corps Volunteer Jeff Hubley.

The project was to build a new 4-toilet brick pit latrine for the male students at the school.

The Ivuga pit latrine has been completed, providing the boy students of Ivuga Primary School with a new latrine.

The project was completed with its fair share of problems. Supplies had to be brought in by truck from faraway villages. The bricks and tin roofing that were going to be recycled from the old collapsed latrine had to be gathered, and then brought to the new site.

But one of the biggest problems with building the latrine was actually digging the 6 meters deep for the proposed latrine. In this stage, one hole was dug to 1½ meters, only to be abandoned due to a large bolder found. After that, the next hole found itself with a boulder at 3 meters deep.

So, at this point the villagers during a meeting had to decide whether to risk digging another hole or risk breaking the rock (a process dealing with lighting a large fire under the bolder for hours and then trying to break it). After a lengthy discussion, and much worry due to dwindling funds and a tight budget, the village committee decided upon busting the rock and continuing with the original hole.

Much to everyone’s delight, the bolder busted under pressure and we no longer found ourselves between a rock and a hard place.

The rest of the construction went along slowly but surely, and now the school finally has itself another pit latrine.

The village as a whole has been very happy to receive the help. I personally have felt very awkward receiving so much thanks for what I provided, due to the fact that I was more of a middle man in the whole transaction.

But to be perfectly honest I think the happiest person was my neighbor who is the headmaster of the secondary school. During one of the many hang-ups of the project, he came to my house, insisting that the project had to be finished before the next week. When I asked him why all of a sudden he was in a rush, he told me that he had come across children pooping along one of the paths close to his house.

So, after this event, we kicked it into the next gear, and after a short 2½ months the pit latrine was completed.

I would like to thank all who contributed to the funding; it was a worthy cause. My next project will be to set up a handwashing station outside the latrine with recycled plastic bottles.

We would like to thank Jeff or completing this project, despite the adversity. We again extend our gratitude to his friends and family for providing the funding. 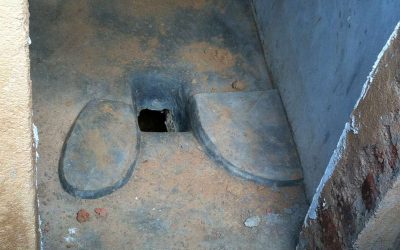 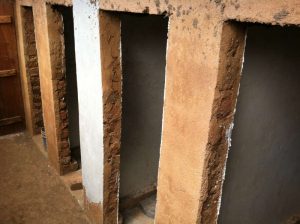