This project has been completed in partnership with Habitat for Humanity Vietnam. To read about the beginning of the project, CLICK HERE.

The project was to implement a rainwater collection project to serve about 150 people who lacked an effective way to obtain water for their needs.

The partnership was successful in designing and implementing a rainwater collection project, which resulted in service to 23 homeowners and their families in the district.

The families are involved in a microfinance project and had the option either to build large, concrete rainwater catchment containers or to buy large rainwater jars, depending on the location of each household.

Habitat’s Dana McNairn reports on the project by presenting two typical case studies from among those who have been served by this project: 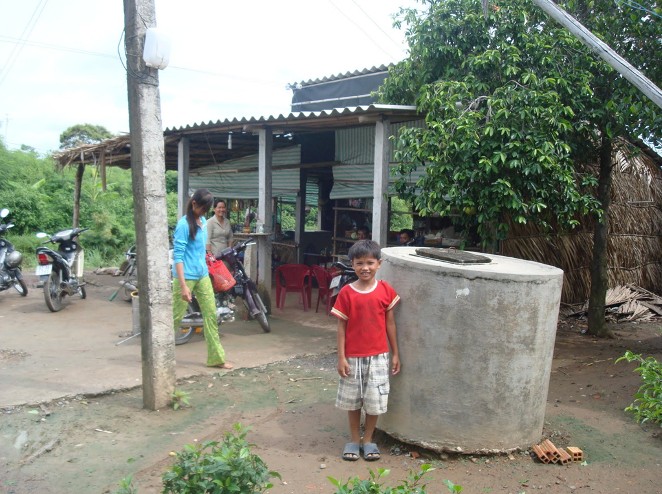 Chuyen’s Family
For the last five years living in Rach Bun hamlet in Go Cong Dong district, Nguyen Thi Thanh Chuyen and her two children suffered from a severe lack of water, as did the majority of their neighborhood. Due to the low elevation of the area, the soil is becoming saltier every year. Chuyen’s family collected water from a river nearby and stored it in three jars, containing about 100 liters in total. However, as the season changes, ocean water surges into the river, the resulting water is undrinkable. Throughout this season, the price of freshwater shoots up to around VND 100,000 (US $5) per liter, a price few can afford.

Within three days of implementing the project, Chuyen hired a team to complete the construction of a concrete rainwater container, measuring approximately 2m X 3m. She can store about 25 times more water than before and ensure that her family’s basic needs for safe water are met. “We used to drink from the river,” she said, “but now, we’ve got a more healthy drinking water supply. Our lives are much more improved.” 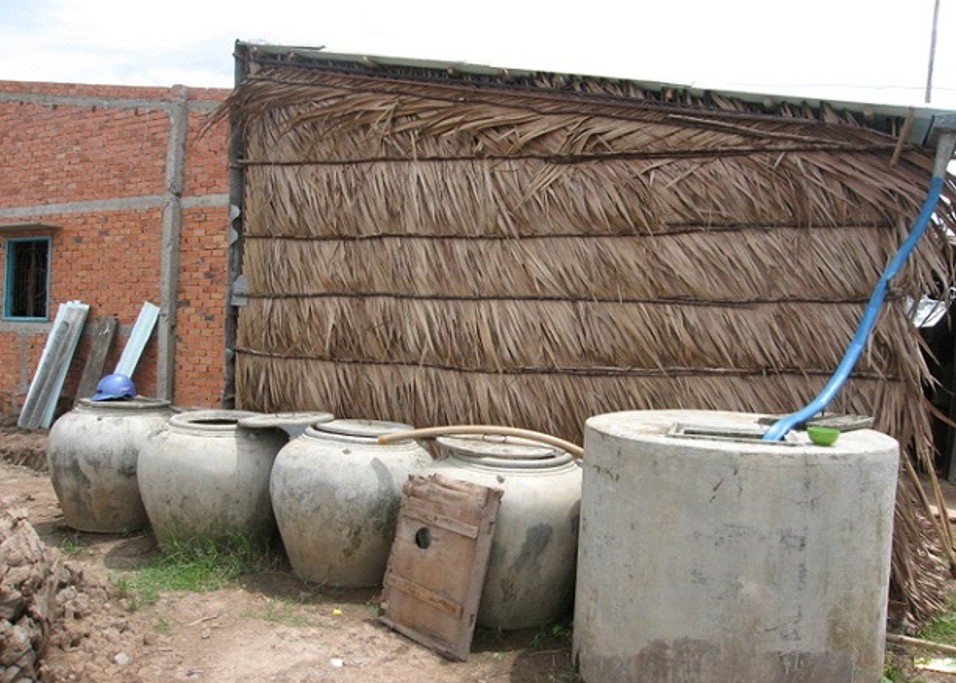 Linh’s Family
On average, each person needs at least 2.5-3 liters of water a day for basic survival needs. This means the four large water jars that Phan Ngoc Linh’s family were using would only provide enough drinking water for two months, leaving her family with a dramatic shortage of water during the annual dry season.

Living in a coastal area of Tien Giang province, the family has limited access to safe clean water. Due to the area’s low elevation, the rise and fall of the tides infiltrate the soil, making it too salty for groundwater wells. On the other hand, it is far too expensive to drill deep wells. Piped water is also not an option due to the remoteness of the area.

While the five members of Linh’s family used to rely on four jars of river water, they knew drinking river water was not healthy and the jars not sufficient. When the project was begun, Linh signed up immediately and waited for her turn to build a concrete rainwater catchment container.

Habitat provided technical expertise on construction, as well as safe water and sanitation practices. Households like Linh’s also received assistance for locating sources of affordable materials, as well as supports on simple methods of water purification. Financially, each family also received a microfinance loan with very low interest to be paid in three years into a revolving fund so that other households can access money in the future.

The project is important in two aspects. First, it was designed to assist the families with whatever services and materials they needed for their individual needs. Second, the impact of the funds spent on the project was multiplied by an innovative microfinance program, which will result in more families receiving benefits far into the future.