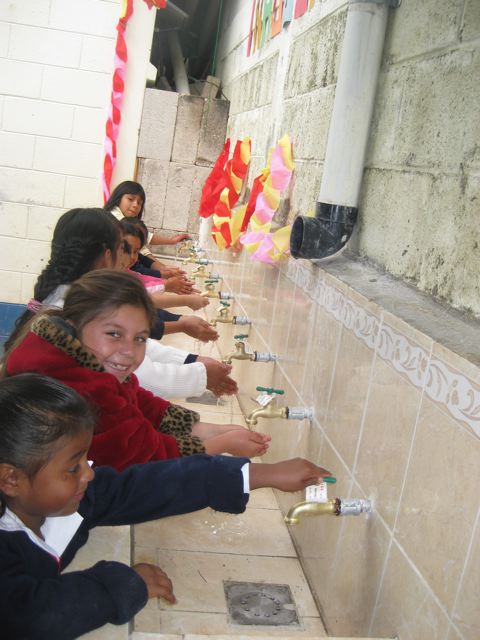 The project was to construct a handwashing station with 7 faucets at the school.

Scope of the Project
Financial help from Appropriate Projects paid for all the main construction materials. The project was successfully completed with final monetary contributions from parents. Both the skilled and unskilled labor were contributed for a fair price and paid for by a community member and parents.

An even larger handwashing station was built than had been originally planned. Instead of 7 faucets, 9 were constructed, one for a pila which will also be used to wash the students’ cups. Now, the 257 students and 10 teachers of the morning session and 30 students and 2 teachers of the special education afternoon session will have easy access to water. This will ensure that all the students are practicing the necessary healthy habits, such as washing their hands after using the bathroom and before eating the school snack, in addition to brushing their teeth after snack.

How the Work Progressed
I went to the store, with the mason, 2 teachers, and 2 mothers, to buy the vast majority of the materials on August 11, 2011. The mason and his helpers initiated their work on August 12, 2011.

In total, the mason worked 15 days and the helpers 18. A community member donated the necessary funds to pay the mason (1,000 Q), and the parents of the school contributed the funds to pay the helpers (1,104 Q). Approximately 500 Q was additionally donated by the parents to pay for the steel doors that were put on the handwashing station, in order to access the handle used to control the water source and the drainage that will need to be cleaned, in addition to the space underneath the pila that will be used for storing soap and other supplies.

End Result
The funds from Appropriate Projects paid for the majority of the construction materials, and we were actually able to construct a handwashing station with 9 faucets in total, instead of only 7 as was originally planned. There was not enough money left over to pay for the steel doors, but the parents contributed the rest of the funds for those.

On September 5, 2011, the school held a day-long Handwashing Festival, in conjunction with the Inauguration of the Handwashing Station. Students participated in special activities and skits planned by the teachers, all related to hygienic practices and healthy habits. Afterwards, the director held a ribbon-cutting ceremony to celebrate the completion of the handwashing station. All the students and teachers, some parents and community members, the superintendent of the district, and I attended.

Reactions and Quotes from the Community
“Thank you so much for all the donated materials that were needed in order to complete the 9-faucet handwashing station. It will be a memory that remains in the hearts of the 257 students that use it every day to wash their hands and brush their teeth. I put faith in God and hope that people like you continue helping underserved populations with needs like ours through the implementation of these types of projects. The project was done quickly, but without your help, it would not have been possible. Our community sends greetings, admiration, and respect to your U.S.-based organization that has helped us with generous financial support.”
-Carmen Choz Mutz, Principal

“All the fathers and mothers of children who attend this school are very grateful for the U.S. funds that were used to complete the handwashing station project, with 9 faucets and a pila for washing cups. With this project, our children will be able to form and practice the habits of personal hygiene in order to prevent illness and remain healthy.”
-Maria de Pelico, Member of the Parent Committee for School Management and Maintenance

“We first graders of EOUM Barrio La Cienaga are very grateful for the handwashing station that was built so that we can always have clean hands after going to the bathroom and before having snack. The handwashing station is beautiful. God bless you. Please keep collaborating with other communities because our country has limited economic resources, and we need your help. Thanks a million.”
-Students of 1st grade

We wish to thank Lauren for completing the project and Steven Browne for providing the funding, along with friends and family of Lauren who contributed money to go toward future projects in Guatemala. 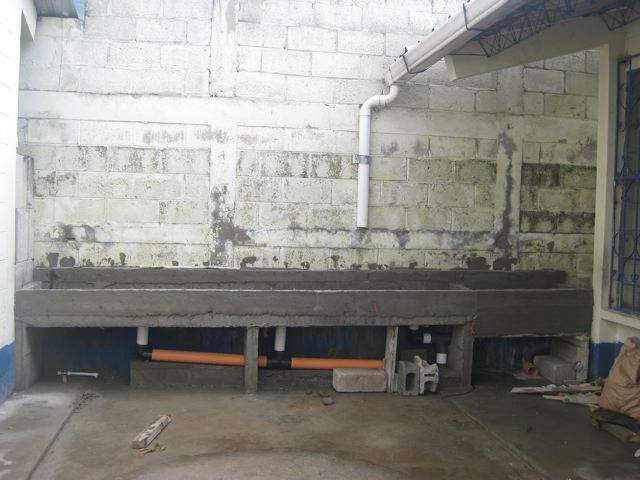 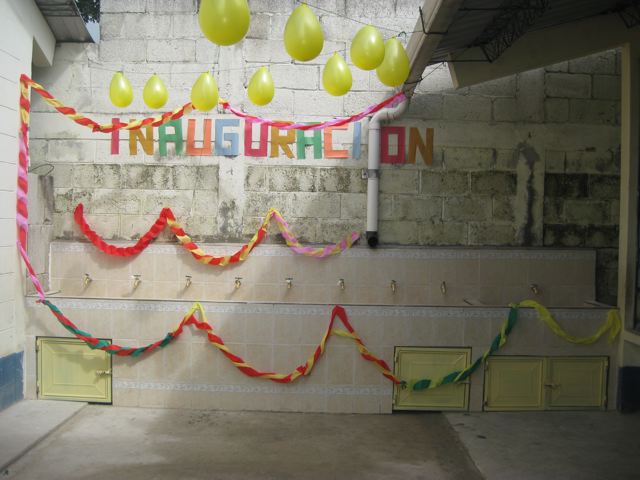