This project has been completed under the direction of Peace Corps Volunteer Annie O’Donnell.

The project was to build a rainwater catchment system to provide water for the school.

We designed a simple but efficient rainwater collection system using PVC tubes cut and connected to the zinc roof of the school to collect and direct rainwater into a 300 gallon tank. The water is treated weekly by the teacher of the multi-grade school, and has eliminated the need to collect water in uncovered buckets, which in the tropics creates a huge risk for dengue and malaria. Having water at the school now also keeps kids in the classroom instead of having to take turns fetching water from the well at a neighbor’s house.

The initial workday was a challenge and a success! In the morning we organized with just the PTA and were happy to see that 8 parents showed up to help. However, shortly into the project we realized the scope of the task was much more complicated than we had anticipated. We asked a few of the students who had come to help to see if they could find others willing to help.

To be honest, I was apprehensive about getting others to come out on a Sunday when the rain clouds overheard were rolling in quickly and threatening a good drench. “Oh how I want that rain in the tank,” I thought.

The school had been shut down twice in the 2 previous weeks by the Health Center for not having clean water. They, however, had no intentions of offering help for the situation.

Within a half hour the kids had rounded up more than 10 people bringing our work party to almost 30 and like magic, the tubes were cut, ladders were climbed, the tank was rolled up and placed, and the pump was wired.

15 minutes after we finished the rain fell. An hour and a half later, the rainwater catchment tank was full. A year later after that successful day, the little school of Caisan Fuertes Caminos has not missed a day of school for not having water.

There are no words of gratitude that I could say to Water Charity and their donors for taking a chance on young, big-hearted, Peace Corps volunteers like myself, who, although we have the willingness to take on projects like rainwater catchment wells, often lack the technical and organization skills to get them funded.

Thank you so much Water Charity and its donors.

We wish to thank Annie for completing this project, and again extend our gratitude to The Soneva SLOW LIFE Trust for providing the funding. 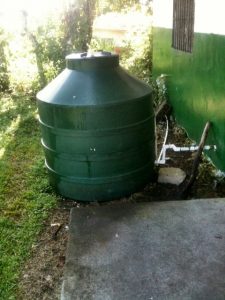 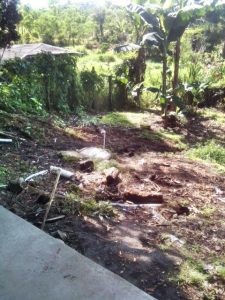