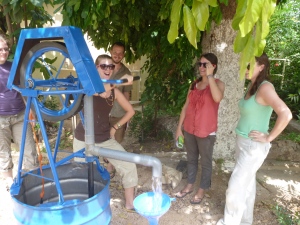 While I was very excited to put together this pump for the Training Center this week, I was not too excited about the time frame in which I had to complete the project. I arrived in Thies with just a day and a half to put the whole thing together before a scheduled demo for the Health and Environmental Education volunteers at their In Service Training. After sitting in the medical unit in Dakar for 6 days this sudden shift was a little jarring. Then again I enjoy being busy so it was nice to get back to work.

I started my day in the Thies market where I was lucky enough to find a beautiful new oil drum within about half an hour. Most of the time the ones available for purchase are old and dented but this one was shiny and new. So new in fact that it was still extremely greasy. I cleaned it out and brought it next door to a local welding shop where we welded four metal plates to the top and then bolted on the pump. After this we cut a small hole in the middle of the barrel and attached a PVC pipe to recycle the output back into the system: this way we wouldn’t have to constantly refill the barrel. After this the install went pretty much like any other pump. The system is exactly the same, just on a very miniature scale.

On the demonstration day volunteers broke up into groups and went to different stations where they learned about various appropriate technologies such as improved stoves, nutritional supplements, and yes of course rope pumps. Every group seemed genuinely interested as they tried it out, asked questions, and even inquired as to how they could get a pump for their village.

The real indicator of success however in my opinion was the fact that after all the volunteers were gone about 6 Senegalese staff members came up to look at the pump and see how it works. One of the drivers said he was going to bring his son to see it, three women from the kitchen wouldn’t stop saying good work no matter how much I tried to stop them and one man who comes by to trim the trees asked where he can buy one. Half the battle of improving living conditions here is just finding a way to motivate people to try something new. This pump inspires people and gives them hope that they really can better their lives. 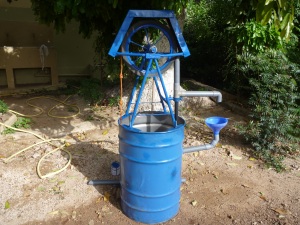 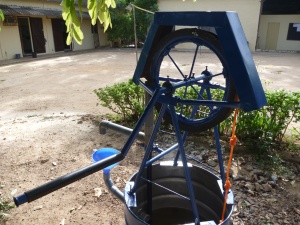