Community Description
Chaema is a densely populated community located on the southern side of Mount Mulanje. The village currently has 512 households and a total population of 2,275 people. Economically, the village consists of low-income farmers who grow cash crops like tea and pineapple to sell so they can afford staple crops like maize, which is a dominant part of the local diet.

Problem Addressed
Chaema is a unique community in the sense that it is situated on Mt. Mulanje and that it borders a perennial river. Unlike most communities that rely on boreholes or shallow wells for water, Chaema has a gravity-fed pipe system, diverting water from the river, allowing its members to install water taps for easy access to clean potable water.

The current system, however, only runs through the village’s main path making it difficult for villagers who live near the boundary to access the system. These villagers have to travel long distances through tough rocky terrain carrying 20- liter buckets of water on their heads just to obtain clean water. 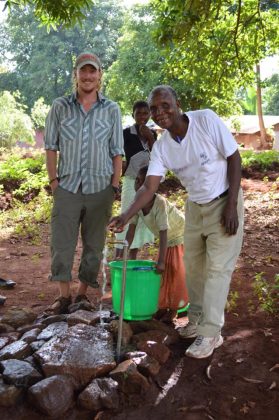 Water taps are affordable for individuals, but the infrastructure needed for those taps is very expensive.

Project Description
This project is to install a piping system to divert water from the mainline and carry it to the villagers in need.

Under the direction of the Village Development Committee, the villagers will dig a trench that is 1,250 meters long and two feet deep into which the new pipe to be placed. Skilled plumbers will then cut into the mainline and install a fitting that will allow water to flow to the newly installed pipe.

Plumbers will also install 4 taps that will be strategically placed along the new pipe in order to minimize the distance that villagers need to travel to access water.

The village will provide the labor needed for digging the trench and will cover the costs of the plumbers.

Water Charity funds will pay for 165 polyurethane pipes, 4 taps, and the appropriate fittings to divert water from the mainline. 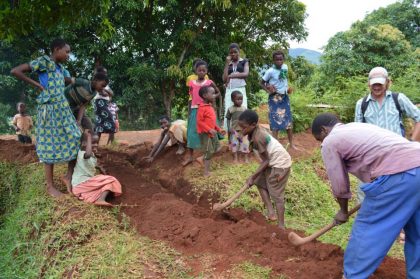 Project Impact
412 people will benefit from the project.

Comments
Villagers will work together to install the piping system, which will make it possible for people to have a convenient supply of safe water at an affordable cost.

Dollar Amount Needed
$0.00 – This Project has been fully funded by Sheroma of Melbourne, Australia, in memory of Jamsheed F. Uduman.

This project has been finished.  To read about the conclusion of the project, CLICK HERE.