This project is made possible through the collaboration of Water Charity and the National Peace Corps Association. 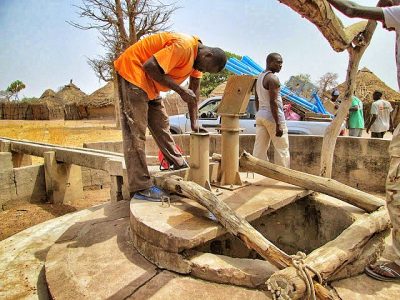 Problem Addressed
Many of these rural villages struggle with clean water access. For numerous communities, the government installed handpumps in the 1990s.  However, due to low capacity to maintain or repair these pumps, many of them are breaking and broken. This leaves women and girls, those traditionally responsible for collecting water, with little choice but to walk farther in search of working water points.
However, some communities have no option but to resort to pulling out broken pumps and turning protected wells into open wells.  Villagers using ropes and buckets to draw water are at high risk of contaminating their water sources and spreading debilitating waterborne diseases like dysentery and diarrhea.
In addition, when pumps are dismantled, handpump components commonly go missing or are stolen and concrete slabs are broken and damaged, leaving no possibility of fixing them. Similarly, some villages have never benefited from drinking from protected wells, and instead have relied on open wells for generations.  Locally dug open wells are not only sources of dirty water, but also physically unsafe and pose a safety hazard for the very children and women who use them.
Project Description
This project seeks to replace 1 aging Mark II handpump and completely rehabilitate four malfunctioning or defunct Mark II water points with new robust and durable Bluepumps, in a total of four villages (Sare Sambel, Sare Bakary, Kalikajara, and Dankunku). Moreover, this project also seeks to repair two broken Mark II handpumps in Fula Kunda, a fifth village. 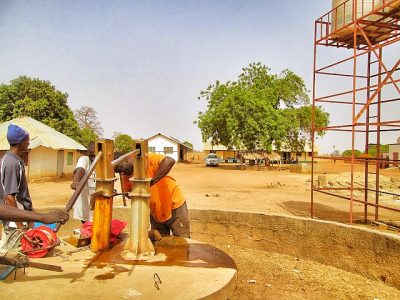 Without these immediate replacements/repairs, communities are either under constant threat of their pumps failing at any time, or are currently forced to walk further to find clean water sources or simply to drink out of dirty, open wells. Through these timely rehabilitations, we seek to replace dilapidated, and outdated water infrastructure with more sustainable, preferential options; restore clean water points/eliminate dependence on dirty water sources; and where limited by funds, perform quality repairs to extend the life of old Mark II pumps until replacement by Bluepumps is possible.
Project Impact
Through a “hub and spokes” approach, this project will rehabilitate pumps at both a central, hub—the Dankunku District Health Center—as well as 4 underserved, remote satellite villages. Combined, these pump works will benefit approximately 2,800 direct beneficiaries. Indirectly, the more than 26 villages that rely on the District Health Center (patients from outside Dankunku District are often referred to this health center) will also benefit. 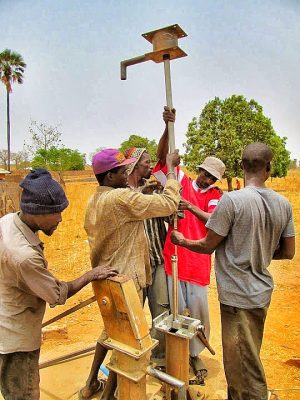 A short description of each community is below:
Sare Sambel is a small, ethnic Fula village of 150 people from 6 compounds. They have a working German Mark II handpump that we serviced with new moving parts in 2013. However, this pump is the village’s sole source of clean water. It can break at any time, and the closest village with a clean water source is at least a 30-minute walk away.  We aim to replace their old Mark II with a new and long-lasting Bluepump.
Sare Bakary is a community of approximately 200 people from 7 compounds. They have a newer GWE Mark II cylinder that is malfunctioning. The low weight of the rods (due to the shallow depth of the well) and the tight tension in the rod plunger means that the pumping action brings very little water.  The community has an open well from which they have to resort to drinking from, as well as 3 weak, small-volume piston pumps, but neither provide the volume or quality needed to meet the village’s demands. The nearby village of Choya has a solar borehole and tap stand system as well as a functioning Bluepump, but due to poor inter-village relations, the sharing of these resources with Sare Bakary is not possible. We seek to replace Sare Bakary’s problematic Mark II pump with a new Bluepump to provide the community with a durable solution to their water needs.
Kalikajara is a village of 117 people from 12 compounds. They had two handpumps installed 19 years ago over a single well. The pumps failed and were pulled out 5 years ago, and the village has since turned the covered well into an open one, drawing water by buckets and rope. We plan to clean debris that has fallen into the open well over the years, shock chlorinate the water, reset the slab and close the well, and install two new Bluepumps. This is without a doubt, our most ambitious well rehabilitation effort ever, and arguably, the most impactful.
Dankunku Health Center’s independent solar water system broke long ago and now depends on a tap stand hooked up to Dankunku’s larger solar borehole water system, as well as a double pedestal handpump well in front of it. The village borehole system sometimes shuts down and is closed at night, leaving the health center with just one working Mark II handpump, which we fixed a couple of years back. The well also has an Indian Mark II pump, which stopped working years ago. The pipes and rods were locked up the Health Center store, but the cylinder has gone missing. We aim to install a Bluepump on this Indian Mark pedestal to improve clean water access for medical patients and their families. 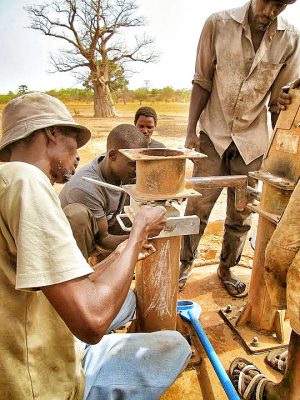 Fula Kunda is a village of 350 people from 14 compounds. They have two breakdown-prone Mark II handpumps that are 23 years old. We have serviced them every year from 2012 through 2014. They stopped working, forcing women and girls to fetch water in neighboring Dankunku. Upon inspection, we found one handle stuck, and the other not drawing water, causing us to think that sand had clogged one pipe (sand was drawn in limited quantities when we fixed this pump in 2014) and that the other had an issue with the plunger/cylinder mechanism. This project seeks to attempt to fully rehabilitate both of these nonfunctioning pipes.
Returned Peace Corps Volunteer Directing Project
Jeremy Mak, a member of the National Peace Corps Association and the Returned Peace Corps Volunteers of Los Angeles.
Monitoring and Maintenance
The villages will be responsible for their own wells and handpumps.  Should repairs become needed, Water Charity will authorize follow-up projects and ensure the continued functionality of the installations.
Comments
Jeremy did this well repair and installation project simultaneously as he was doing a water filter distribution project in the region.  That project can be seen HERE. Truly incredible work, adding to his already impressive list of projects done with Water Charity, both as a PCV and as an RPCV. Go Jeremy!
Dollar Amount of Project
$9,000
THIS PROJECT HAS BEEN FULLY FUNDED DO TO THE GENEROSITY OF JEREMY’S FRIENDS AND FAMILY!
Any further donations to this project will go to future projects by RPCV Jeremy Mak, or in The Gambia.
This project has been completed.  To see the results, CLICK HERE.