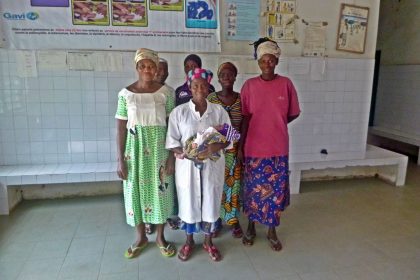 Community Description
The village of Aou Matchatom, is located 30 km south of the regional capital of Sokodé, in the Centrale Region, off a poorly maintained lateritic dirt road. While the population of Aou Matchatom itself is small (940 inhabitants), the health clinic serves a larger population of over 3,000 which includes villages within a 20 km radius. The ethnic makeup is predominantly Kabyé who settled this area very recently.

In 1990, Togo suffered a civil war when the then President of Togo (the father of the current president) refused to hold national elections per the constitution and there erupted a period of violence between those in the south representing the opposition, and the President’s ethnic group, the Kabye in the north. This resulted in the forced migration of many Kabyé out the southern Plateaux region into the northern regions, including the Centrale region. The land was given to a group of Kabyé in the Aou Matchatom area which was essentially uninhabited forest at the time. The Kabyé were later joined by other ethnic groups including the Lamba.

The dominant religion is Christianity, with less than 10% Muslim. Most are subsistence farmers, cultivating the region’s dominant crops: maize, yam, millet, soy, and beans. The area surrounding Aou Matchatom is food secure for most households. The community has 12 active micro-finance collectives of around 25 persons established in 2012 with ongoing assistance from a Togolese finance NGO. Another Togolese NGO assists youth in developing leadership skills. For a few years, the US-based NGO, Alaffia, was providing financial assistance to marginal women primarily for maternity care.

The communal water situation is the same as in most of rural Centrale. There exist several shallows, open wells of both poor water quality and limited supply during the dry season, and one borehole well. The Aou Matchatom health clinic is the standard 7-room cement block structure found throughout the Centrale region, and financed by the Islamic Development Bank (BID) in 2004 and completed in 2006. Even without potable water and a yearlong supply, the clinic since 2012 has been a participant in a successful national maternal-child nutrition program (partly designed by a Peace Corps Volunteer in 2012) to identify severely malnourished babies and toddlers, using the brachial perimeter method (arm circumference measurement). Children thus identified are enrolled in an intensive, high-calorie nutritional diet and closely monitored program until the desired weight is attained. As a result of this aggressive intervention with the assistance of community health workers (i.e. community individuals trained to identify household-level health problems including childhood malnutrition, malaria detection and prevention), severe malnutrition among babies and toddlers in the area served by the clinic is now infrequent if not rare. 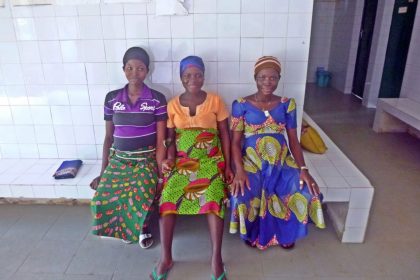 The water source at the clinic, installed at the time of construction, consisted of a roof, a rain-catchment system which routed dirty, unfiltered runoff into a closed cistern. The water quality was very unsanitary as the roof runoff system lacked a filter, resulting in the discharge of organic matter, including small animals, into the (closed cemented) cistern, thus further polluting what water had collected. Water was manually pumped to a 2 m3 polyethylene tank situated above a 5 m high metal water tower, and gravity-fed into the clinic.

The clinic is currently equipped with sinks and faucets in three of the rooms including the maternity room. However, for most years since the opening of the clinic there has been no potable water at all (and no water at all during the 5-month dry season). In 2015 the pump ceased functioning altogether which was not a great loss as the clinic staff and the neighboring households have long ceased using the rain-catchment water. The clinic staff has since relied on water from a borehole well 1 km away.

Project Funding
This project has been funded by an anonymous donor.  Please make a general contribution to Water Charity so we can continue to do great projects, such as this one. 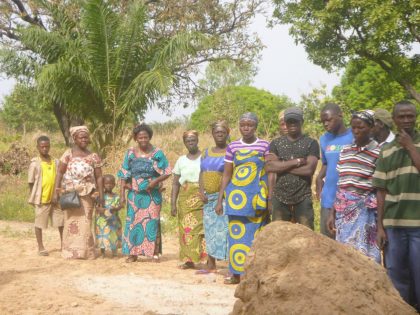 The purpose of the borehole water system project at the Aou Matchatom health clinic was to address a lack of both potable and year-round water, either the absence of or nonfunctioning indoor plumbing and the lack of hygienic disposal of afterbirth blood and tissue.

Following borehole drilling, a “pump test” was run to determine the well’s productivity and in turn the hydraulic properties of the aquifer. The pump was run for several hours at a rate like actual use and the declining water table (drawdown) was measured at regular intervals. The Aou Matchatom borehole was drilled to a depth of 105 meters and has a yield of 1,300 liters/hour which is more than adequate to supply both the clinic needs and those of the surrounding households. The pump test also indicated a rapid refilling of the borehole, implying even when run at the maximum yield rate, the well should recover quickly and not result in significant lag times. Simply put, the hydraulic conditions of the well are favorable to insure a sustainable water supply for many years to come (assuming the system is well maintained).

Numerous visits were made during the well installation by the Water Charity Coordinator and the government hydrologist to oversee construction and to insure the clinic and community leaders understood the responsibilities associated with maintaining and insuring a sustainable water supply. A final visit by the Regional Director of hydraulics insured the borehole well and the associated delivery system met all the driller’s contract requirements and functionality. 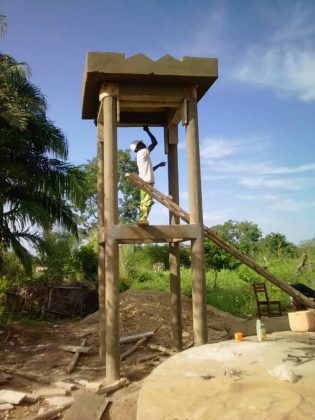 The Aou Matchatom clinic serves a population of approximately 4,100 people, including the neighboring villages, who will directly benefit from a more hygienic health clinic. While clearly not all 3,000 people living in Aou Matchatom will be accessing the well water for personal consumption, the community development liaison estimated perhaps as many as 1,000 inhabitants in time may utilize the well. The clinic anticipates seeing a rise in births as there is now running water and female relatives are no longer obliged to fetch water for the patient, in addition to an overall improvement in hygiene. The clinic staff will use access to potable water to encourage better overall hygiene, as most of the disease-causing bacteria in the community water sources are due to fecal transmission by both animals and humans. The clinic staff will be better protected against blood-borne diseases as afterbirth material (blood and tissue) will be disposed of in a rapid and efficient manner, significantly reducing exposure.

The Regional Director of the Department of Hydraulics stated in his technical report the Aou Matchatom health clinic borehole well water system has fully succeeded in meeting both the local and national objectives for potable water. The Department of Hydraulics, the Ministry of Health and staff at each rural health clinic served by this project have repeatedly been astounded at the expediency with which funding was made available thus allowing work to begin within weeks of submitting the project request. Thank you, donors and Water Charity! The efficiency of work that followed was due in large part to the incredible efficiency, planning, and hard work by the local drilling company’s crew. The Regional Director and the hydrogeologist at the Department of Hydraulics and Water in Sokodé also contributed their time, vehicle and expertise to insure all technical aspects of the project conformed to modern standards and have assured their continued presence as the borehole wells are now part of the national water database and monitoring program. Having the government of Togo involved from the beginning in this suite of health clinic projects, from the selection of health centers to technical oversight and continued monitoring by the Ministry of Water officials, has confirmed the importance of not doing community projects as isolated NGOs. This last point is critical to continued success as most water projects in Togo are implemented without government oversight, leading to a myriad of problems none the least being poor technical implementation and little to no continued oversight.

The Aou Matchatom project was implemented in concert with five other health center water system projects, scattered over two districts – all of which were completed on schedule. The community of Aou Matchatom offers its sincere thanks and gratitude to the donor(s) for this valuable water resource. As they say here “l’eau est la vie”. Water is life, and the cleaner the water the longer and more satisfying life will be! Un grand merci!