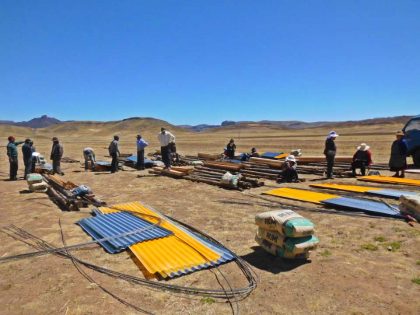 Community Description
Angará Bajo is a large and dispersed community on the high plains of the Pucará District of Puno about two hours from the famous Lake Titicaca. Like many people in this area, this community of approximately 100 families relies heavily on cattle husbandry as their source of income. Interested community members work with the Peruvian NGO Asociación Pro DIA, the operational arm of the American NGO the Chijnaya Foundation, on various projects to improve their quality of life. Many of these projects have focused on improving milk production of their cattle as a first step in improving the economy of the community. Examples of some of the projects that have been implemented are the construction of stables and feeding troughs and the improvement of cattle nutrition by planting alfalfa and oats.

Problem Addressed
Rainfall is a crucial aspect of success for agricultural activities and animal husbandry in this region of Peru. However, relying solely on rainfall is risky and unreliable because the rains don’t always come when they should. During the long dry-season months it is impossible to grow anything without using irrigation and nutritious pasture for animals is scarce. The local government implemented an irrigation project that provides irrigation water to Angará Bajo through a series of canals and tubes that lead to strategically placed water hydrants. The project also included providing small-scale sprinkler irrigation systems, however, this type of sprinkler irrigation system has proved to be inefficient: It is difficult to move in order to irrigate multiple areas and the parts often break.

Project Description
This project is to provide an effective irrigation system in order to improve agriculture and pasture growth with the end goal of improving the economy of Angará Bajo. The new sprinkler irrigation system was chosen by the community and has been used in other communities of the Pucará district. It is made of light-weight aluminum and can be connected to either the existing water hydrants or pumps if the user chooses to use water from a well.

Beneficiaries will pay back a portion of the cost of the system and this money will be put into the rotating loan fund of the community to be used for future projects. ;

roject Impact
75 people at a time will benefit from this project.  However, the system can be shared by other families in a participatory program.

Community Organization
Asociación Pro-DIA will work with the community members of Angará Bajo on project implementation.

The project will be administered by Ralph Bolton, Returned Peace Corps Volunteer (Peru,’62-’65), and founder and director of The Chijnaya Foundation. Work will be done under the direction of Chijnaya’s operational arm, Asociación Pro-DIA, a legally-constituted Peruvian counterpart. On-the-ground work is being managed by Kimmy Mazza, Returned Peace Corps Volunteer (Peru,’16-’18). The work of Ralph and Kimmy with Peace Corps Peru spans over half a century. This project is a part of the Altiplano Water Program – Peru.

Monitoring and Maintenance
The community members will be trained on the operation and maintenance of the new irrigation system and they will provide funds sufficient to maintain their irrigation systems, conduct repairs, and perform replacements when necessary.

Project Funding
This project has been funded through the generosity of the Paul Bechtner Foundation. Additional contributions will be used for other projects in Peru.