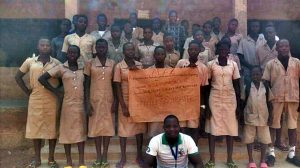 Community Description
Zogbodomey is a town, arrondissement, and commune in the Zou Department of south-western Benin. The commune covers an area of 600 square kilometers and as of 2002 had a population of 72,338 people.

The economy of Zogbodomey is based on agriculture, livestock, trade, and agro-food processing.

Agriculture employs over 80% of the population, with the main crops are grown to be maize and groundnuts, but in recent years, producers are turning to other commodities such as vegetables, cotton, cassava, soybeans, cowpeas, and rice.

Problem Addressed
Although access to information on handwashing and environmental cleanliness has improved in the past few years, local schools lack the resources to provide adequate garbage disposal methods or handwashing locations for the promotion of these positive behavior changes. 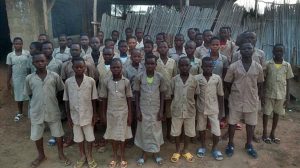 Project Description
This project is to construct 60 trash receptacles and install them in critical areas in five schools. In addition, 2 handwashing stations will be installed in each of the five schools. The project will be implemented under the direction of Association des Ambassadeurs pour un Meilleur Avenir de Zogbodomey (AMAZ).

The schools were strategically chosen for this project based on the location of the schools, amount of littering and lack of handwashing stations.

In the first phase, AMAZ recruited health officials in each community to speak to students about the behavior change with proper handwashing and garbage disposal. AMAZ has presented proper handwashing techniques, the importance of having a clean school environment and how to turn trash into compost. Students and teachers participated in a community mapping project to identify the critical areas of littering and where handwashing stations and garbage cans would be of the most use.

In the third and final phase, two handwashing stations will be installed in each of the five schools. Lessons will be given on proper handwashing by AMAZ and the school’s WASH committee. 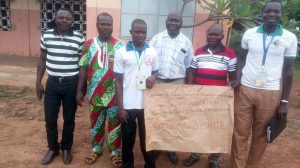 Monitoring and Maintenance
After each phase, the organization will be required to monitor the use of each tool by communicating with the school’s WASH committee and making visits to the schools.

A month after the last phase, each school will be and evaluated for proper maintenance of the improvements. If the garbage cans or handwashing stations need maintenance, AMAZ will show students what is needed to repair and maintain the tools to encourage the sustainability of the project.

This project has been completed under the direction of Peace Corps Volunteer Katlynn Alm. To read about the start of the project, CLICK HERE.

The project was designed to construct 12 trash receptacles and 2 handwashing stations at each of the five schools. 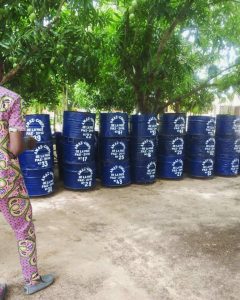 In August of 2017, I was approached by a local organization called AMAZ in my village. AMAZ presented themselves as a collective of young activists who are committed to the “environmental revolution” of their commune. They explained to me that through sanitation and hygiene, they aim to better the lives of children and families that make up their community.

They approached me with a project proposal: 60 garbage cans and 10 handwashing stations distributed throughout five schools. They asked if I would be willing to help and I said “no.”

I said “no” because past experience taught me that many proposals were not serious. I challenged AMAZ. I told them that if they were serious, really serious, about this project to come back to me with a typed proposal and budget. Two weeks later, they did. The next day I returned it to them with edits made with a critical eye and asked for a revision. I told them I would not work with them until they thought through every aspect of the project. Where would the garbage go when the cans were full? Who would fill the handwashing stations with water when they were empty? Who would supply the soap? Three rounds of edits were made to the proposal and budget before they proved they were not giving up on this and that is when I decided to help.

The project is broken into three phases: education, garbage cans, and handwashing stations.

Phase I: Education on Hygiene and Sanitation. AMAZ chose five schools (the furthest North, South, East, West and the high school in the center of the commune) and established relationships with the administration of each school. They visited each school to give training to students on handwashing and the importance of cleaning up the environment during the months of November and December, inviting local health officials to participate. They created a WASH committee in each school consisting of motivated students, charging them with furthering the education of students and maintaining the garbage cans and handwashing stations. The WASH committee in each school intends to protect the sustainability of the project. 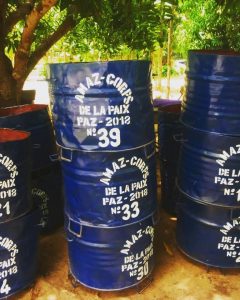 Further, AMAZ conducted Community Mapping, a tool used through Participatory Action for Community Analysis (PACA). It invites community members to draw the spaces where they live or work while identifying important locations such as markets, churches or water wells. Students in each school were given the opportunity to identify high-traffic areas to determine appropriate locations for trash cans and handwashing stations.

Phase II: Garbage Cans. Along with continued education on environmental sanitation, AMAZ gave 60 trash cans to five schools. Depending on the school’s size and the number of students attending, each school received the appropriate number of trash cans to encourage behavior change. When the garbage cans become full, the WASH committee is charged with emptying them. AMAZ hopes to continue the education by showing students how to create compost out of waste, eventually leading to school gardens.

Phase III: Hand-Washing Stations. AMAZ believes that hygiene and good health starts with proper education. In collaboration with health officials, AMAZ continues the education of proper handwashing techniques and offered two handwashing stations to each school that successfully implemented the second phase of the project. A month of monitoring and successful utilization of garbage cans was required before receiving the handwashing stations. The WASH committee will be responsible for continuing the education of proper handwashing and encouraging behavior change with these new tools.

After receiving the funding from Water Charity, AMAZ ordered the materials for the garbage cans. The garbage cans, unfortunately, were more than budgeted. After talking with the community, local merchants sold the garbage cans at a discounted price to achieve the 60 as planned in the budget.

On March 26, 2017, AMAZ held a distribution ceremony at CEG Zogbodomey. AMAZ invited school officials from all five of the schools to say a few words and collect their garbage cans. Upon return to their schools, they were expected to place the garbage cans as identified in the community mapping in the first phase of the project. Each school was informed that after successful use, monitoring and evaluation by AMAZ they would receive two handwashing stations. 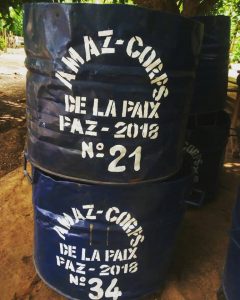 Two months of monitoring and evaluation passed when AMAZ decided to change its plan of action for the handwashing stations. After being challenged to come up with most of the community contribution for the initial project with the rest completed by Water Charity, they decided to challenge other organizations. AMAZ approached local officials and organizations to ask for donations to build two handwashing stations in every high school in the commune with the promise of completing the funding with the initial grant. Community officials agreed, developed a plan of action and submitted it to AMAZ.

Unfortunately, the school year ended before the completion of the project. AMAZ used the rest of the grant to purchase the initial handwashing stations and stored the materials in the school offices with the garbage cans for being placed in the schools next year.

The plan took longer than expected due to teachers being on strike for the majority of the school year, making it difficult to work with school officials or students. Instead of completing the project in June as planned, it continued until the end of the school year and beyond. I look forward to hearing about how AMAZ encourages the WASH committees to take initiative in the upcoming years on WASH lesson and usage of the garbage cans and handwashing stations.

Thank you to Water Charity for your funding of this amazing project. The people of Zogbodomey are grateful for your help and support of our community in Benin.

We extend our thanks to Katlynn for completing this important project.