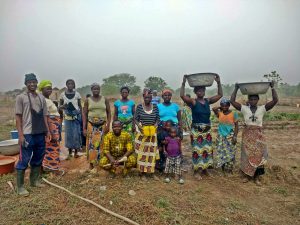 Community Description
The project will take place in Gxxxxxx-Bxxx, a small rural village 15 kilometers from the commune head of Sinende. The commune is rural, making it hard to transport perishable goods over long distances. There is one paved road that goes through the village. All perishable goods like vegetables must be produced in the village itself.

The primary crops are maize, cotton, yams, and sorghum, followed by manioc, soy, rice, beans, and cashews. These crops are cash crops but do not offer the necessary nutrients to battle the malnutrition rampant in the region. Most families in the region earn their living from cash crop farming and are financially insecure as a result.

All of the vegetables like carrots, onions, lettuce, cabbage, okra, peppers, and others come from Libellule, the one garden in the village. It is one of five gardens in the Sinende region. It is the only producer of vegetables for more than 7,595 village residents. The garden spans 2 acres and has over 45 members, with hopes of expanding. The garden is located on the edge of the village and gives well access to more than 20 surrounding households. 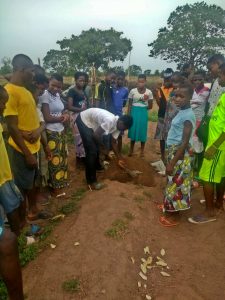 Problem Addressed
The climate consists of two basic seasons: rainy and dry. The rainy season is mid-April to mid-October. It is almost impossible to find clean drinking water during this season because the rain washes all of the road run-off and fecal matter from livestock and humans alike into the normally clean dirt wells used by more than 30% of the village. The other 70% of the village uses pumps.

The garden is situated so that the dirty run-off tapers off before it reaches the garden. Its single well remains useable, so many people in the village take advantage of it as well. During the dry season, however, there is a time from February to mid-April that the locals call “chaleur” or “the heat”. It is almost impossible to find any clean water during this season. The 6 pumps in village are locked and it is necessary to pay a fee to use them. The 20% private wells are also locked. The garden well is unlocked and remains open to the public.

It is estimated that more than 50 households use the one well during this season. The well is insufficient for the more than 600 people who use it. The gardening group paid 200,000 CFA (347 USD) to have a hand- dug 3 meter well put in. The job was poorly done. The well was never lined with cement so each rainy season it grows wider taking up valuable gardening space and adding contaminants to the water. If unfixed this well could become nothing more than a large sink hole.

The simplest and most cost-effective way to serve as many people as possible is to fix the current well and dig an additional well. In order to fully meet the increasing demand for clean water, a completely new 6-meter well is needed.

Project Description
This project is to construct a simple deep-dug well and repair an existing well.

The two wells will be built by a reputable contractor, who has already done numerous projects with NGOs in the area.

The wells will serve the gardening group and the 10% of the village who use the wells for drinking water. Both of the wells will be solid and durable and require little maintenance.

Both wells will be covered and lined with cement. Water will be drawn by a pulley system.

The project will be implemented under the direction of the Gxxxxxx-Bxxx garden group, which is contributing 25% of the needed funds 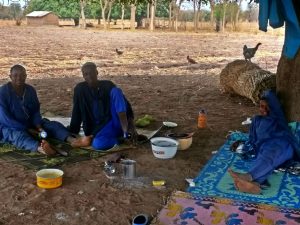 Project Impact
600 people will benefit from the project.

Monitoring and Maintenance
After the construction of the wells, trainings will be carried out on how to properly use the well and how to store clean water. The gardening group’s treasurer will use group funds to maintain the wells and perform needed repairs.

Donations Collected to Date
$2,500 This project has been fully funded through the generosity of the G3 Foundation, of Costa Mesa, CA, USA.

Dollar Amount Needed
$0.00  – Additional donations will be used for future projects in Benin.