Water Testing – Water for Everyone – Togo

Water Testing – Water for Everyone – Togo 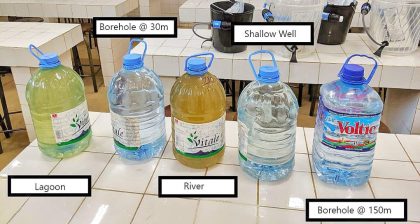 Prior to our Regional Assessments beginning in full effect here in Togo, we were on the lookout for partner organizations and contacts that would be able to put us in touch with government officials, aiding with the awareness of our project. A further benefit of passing our project through government channels is that with letters of permission and their approval, the possibility of our team encountering problems in the field greatly diminishes. Through contacts we were put in touch with ODOS (Office of Development and Social Projects) here in Lome, who have worked with various NGOs in accomplishing numerous projects around the country for the last several years. They are working with us to help establish a presence in each region we’ll be working in, and certainly have friends in high places when it comes to connecting with government agencies. A meeting was arranged for May 22nd, 2019, at which Water Charity and ODOS presented plans for Assessments and Filter Distributions to 10 ministers representing the Hydraulics and Health departments. The presentation included a summary of the 16 borehole projects completed in the Central region by Anne Jeton over the past year, followed by a strategy for performing Assessments region by region to determine water sources and needs, concluding with a briefing on health and income statistics taken from Fiji and Liberia to showcase the benefits of using Sawyer filters. Luke Tarr – Country Director for Togo, prepared and presented in front of the ministers and then fielded questions along with the Director for ODOS, Mr. Roger Goeh-Akue. Everyone was anxious for a demonstration of how the filters worked, which was promptly conducted by AimeFlindja – team member of the Water for Everyone project. Excitement abounded as even the most senior Hydraulics ministers pulled out their phones to take video and witness the seemingly magical change in color and turbidity of the water sample, which was pulled from a very contaminated Lagoon with no drainage here in the city. 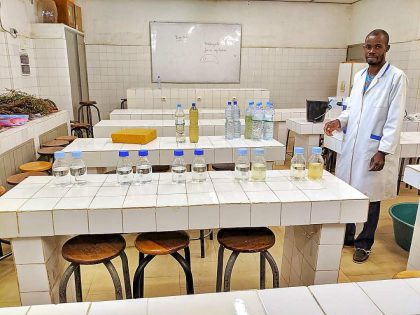 The head of the Hydraulics department was particularly pleased with our plan and thanked us profusely for choosing to come to help Togo with our Water for Everyone initiative. It was decided that we would make contact with lead Hydraulics ministers in each region to see how they can assist us with personnel and detailed statistics going forward, and we were asked to carry out Biological and Chemical testing on various water samples around the city, before and after filtration. Monday, May 27th, we spent the morning collecting five different water samples from around the city, that would be reflective of what populations around most of the country would take their drinking and cleaning water from. The five sources selected are as follows: Zio River about 20km north of the capital, a Retention Basin in the city, a Borehole located in the city at a depth of 30m, an Open Well at the University of Tokoin in the city, and another Borehole in the city at a depth of 150m. These samples were taken to the University of Lome – some of each water source was immediately put into bottles for analysis, where the rest was run through the Sawyer filter before being analyzed itself. Each source ran through a separate filter to avoid cross-contamination, so a total of five filters were used in the testing process. The Biological analysis began right away at the University of Lome, where the Chemical analysis was conducted at a government facility in Tokoin, so we transferred half of the prepared samples to this facility for immediate water testing. Below is the list of criteria tested for in the Biological Analysis (per ML), followed by the results from each water source:

When looking at the results of Biological testing on the water sources, it’s easy to see how effective the filter is. An average of 99.99% of all germs was filtered out from each water source, and in each category besides “Total Germs”, the after-filtration results diminished in each water source to less than one (<1) germ in each ML of water, across the board. Very impressive results were achieved and the Government ministers were surprised and excited to see such success.

Here are the criteria tested for in the Chemical Analysis, followed by the results: 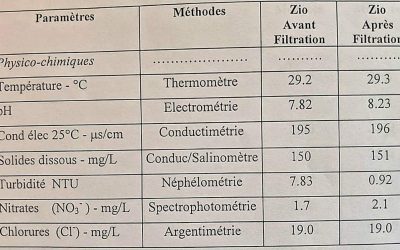 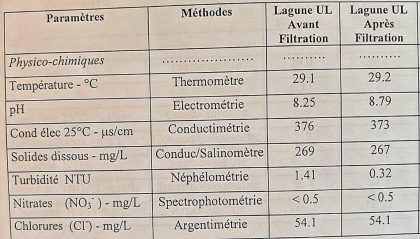 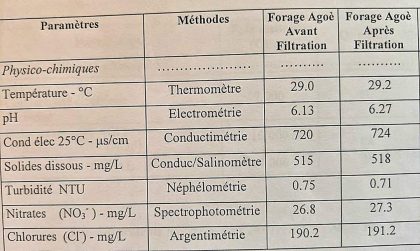 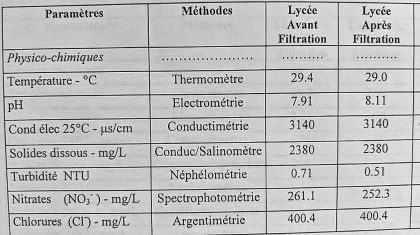 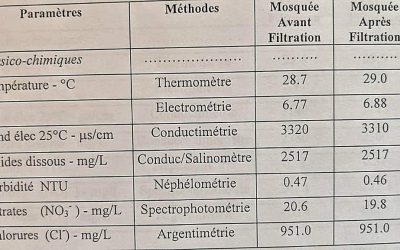 Overall, there wasn’t much change Before and After Filtration when it comes to the Chemical components of the water sources. The only noticeable category here that diminished would be the Turbidity – mainly noticeable from two specific water sources: Zio River and the Retention Basis – the water from both sources was initially quite Turbid before going through the filter. 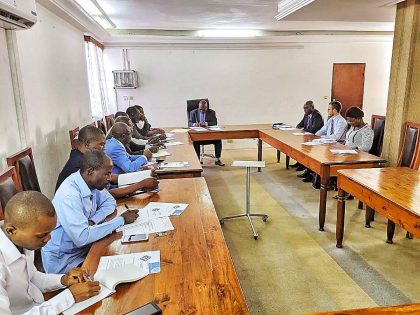 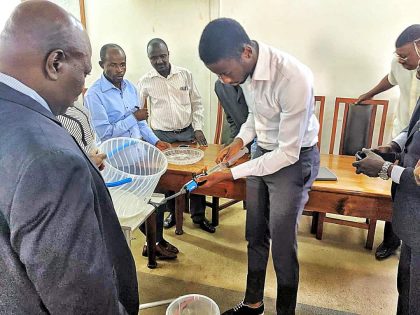 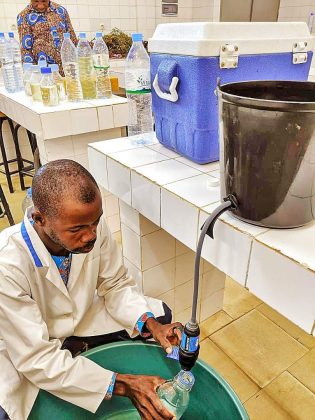 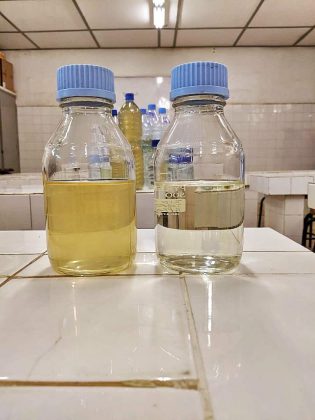