To see related videos to this project. Click Here. 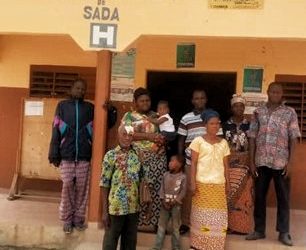 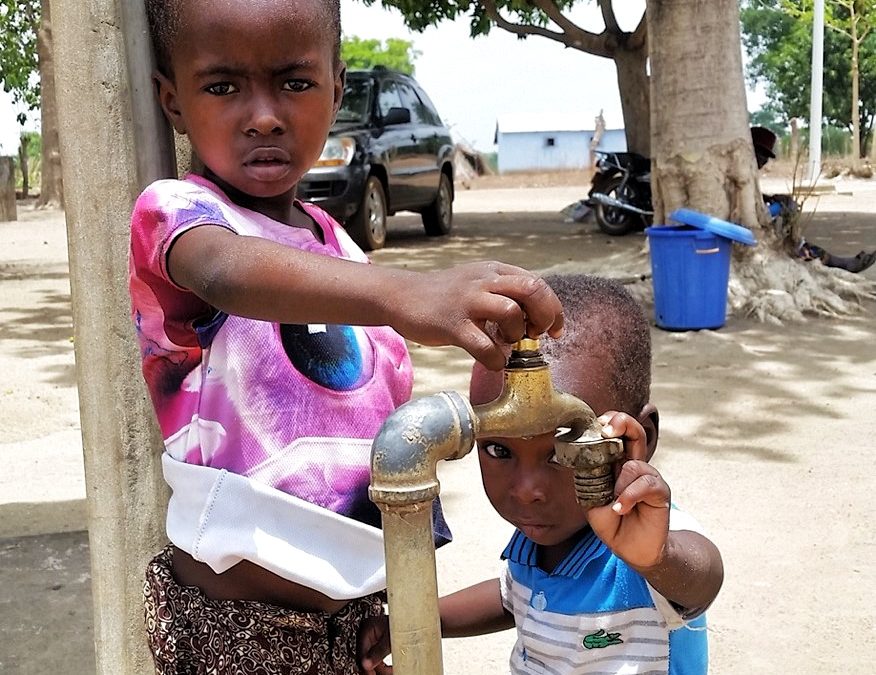 The village of Sada II is another predominantly farming community of several ethnic groups (Kabye, Lossi, Moba) comprising Muslims, Christians and Animists. The farming households are scattered often a km or so from each other adjacent to the family fields.  The clinic, built in 1991,  serves a population of some 4,500 people. This is a relatively remote area (although there is a new cell phone tower!) without electricity. The clinic powers a few lightbulbs and a refrigerator with solar panels. Prior to this project, the water source for the clinic was a manual borehole well a km from the clinic. The village overall lacks year-round water as most of the supply comes from the shallow open wells found in households and some communal locations. This is clearly one of those villages off of the NGO radar as there appears to have been no assistance of any form. The regional Ministry of Health in Sokodé in 2011 registered Sada as a public health clinic though attendance is relatively low given the population. The borehole drilled by Water Charity yielded a very high yield, far beyond the current or even near-future needs of the community. Were the households closer, the project might have considered running water lines out into the community however the low density of households did not warrant the expense. Borehole wells of this productivity are highlighted by the government department of Hydraulics to be later exploited once the need warrants.

Work accomplished: geophysics; a 73 m borehole with a 15,000 l /hr yield and equipped with a submersible pump; a 6 m water tower, plumbing into the clinic; replacement of non-functioning indoor plumbing, a new tiled birthing bed, an afterbirth discharge system and cement-lined septic tank.

The clinic was built in 2005 by Plan International in the manner typical to most of the project clinics (6-room cement-block building without potable or yearlong water (rather equipped with an open shallow well with a hand crank pump to a metal water tank). Indoor plumbing was installed at the time of construction however the pump ceased to function within the first year. The source of potable water was a borehole well several kilometers from the center. Prior to 2022, the clinic operated without power, the all too common, birth by flashlight method.  In 2020 solar panels installed for two light bulbs and a refrigerator. The current project hooked the clinic to a recently installed power line. The clinic is located outside of a village in an administrative area next to a cluster of schools. Most of the households numbering several thousand do not live within close proximity of the clinic so public use of the clinic well will be minimal with the exception of the nearby schools. The region is known for water scarcity where deep borehole drilling has often resulted in dry holes. The current project drilled to a depth of 145 meters and yielded enough water for the clinic’s needs. The population of Bowounda are predominantly Muslim subsistence cultivators of the Kotokoli ethnic group.

Work accomplished: geophysics; a 145m borehole with a 1,200 l /hr yield and equipped with a submersible pump; a reinforced pre-existing 4.5 m metal water tower with a 2,000-liter polytank, plumbing into the clinic; replacement of non-functioning indoor plumbing, an afterbirth discharge system and cement-lined septic tank.

The head midwife in the newly renovated birthing room. She gave a heartfelt testimony recorded on video as to the how the presence of running water, an afterbirth disposal system and drains has allowed both the staff and the birthing woman to give birth in both privacy and hygienic conditions. Pre-project, the midwife (here as well as at all clinics without these improvements) had to manually collect the waste in a basin and dispose of the afterbirth in a pit out-of-doors (thus exposing the midwife to the risk of blood-borne disease). In the absence of indoor plumbing, the woman’s relatives were responsible for bringing water (unpotable open well water) for both consumption and bathing.

New clinic (U.S.P) built in 2018 with government funding, and without a potable water source! The existing source was an open well. An earlier borehole failed (in 2021) due to driller negligence. In contrast, Water Charity drilled at the same location and found a good yield (3,200 l /hr), enough to equip both the clinic and neighbors. Pays to have a competent and honest contractor! The population of Agbandaoude numbers around 2,000 of mainly subsistence farmers however the clinic serves a larger population of over 4,000 which includes outlying households within 5 kms of the clinic. The community is predominantly Muslim with a large sedentary Fulani (herdsmen) settlement on the outskirts. The village households as most in Centrale are scattered some distance from the clinic however there are roughly 100 people living near enough to use the clinic well.

Work accomplished: Geophysics; drilled a productive deep borehole with laboratory-verified potable water (see water quality results in table); installed plumbing from well to water tower into the building. All faucets functioning. An additional outside faucet next to the clinic was also installed primarily for cleaning and use by patients.

AGOULOU is a large village of roughly 8,000 people of predominantly Kotokoli muslims though there are other ethnic groups present. Agoulou is seat of a Canton (or district) administrated by what is known as a “Chef de Canton” who has jurisdiction over 8 other villages, each presided by a local village head or Chef. The health center was built at the same period as most of the project sites, around 1999 by Plan International, an NGO. In 2008, funds from a European government source built a maternity clinic – also without water and plumbing. The water source until this project consisted of an open shallow well that was often dry during the 4-5 month dry season. Agoulou was on the list in 2017 to receive a partial municipal water system given its population however was rejected by the government hydraulic department for unknown reasons.. The clinic staff either purchased potable water or chlorinated well water though not always. This site was first visited by Water Charity in 2018 however we were told they would receive a municipal water system. Agoulou reappeared on the Ministry of Health list of clinics  for 2022. Agoulou is one of the few sites with a dense population close to the clinic. The current goal of the Caton head is to find funding (mainly from the Diaspora in Europe) to equip each of the neighborhoods with a manually driven borehole well. One such well was established about 100 meters from the clinic. With the approval of the Chef de Canton, after determining the water yield was adequate to supply both clinic buildings and the neighborhood, we revamped the borehole well into a dual pumping system, i.e. inserting an immersible pump at depth and leaving the manual pump at the surface. The clinic also had a 5 m high metal water tower which was also functional with some reinforcement to accommodate a 2,000-liter polytank. Given the distance from the borehole well to the water tower, more piping was needed here than at other sites, in addition to plumbing two buildings. We added cement markers to delineate the buried pipes knowing in the future what is now open space could be cultivated or the site of a new building, as some erosion control work. As with all the sites, Agolou also lacked a disposal system in the birthing room.

Work Accomplished: retrofitting a newly drilled community borehole well to accommodate an immersible pump while maintaining the hand pump for community access; reinforcing the existing 5m metal tower, removing the metal tank and replacing it with a polytank; plumbing from the water tower to the main clinic and the maternity center; installing cement line markers for the buried pipes; afterbirth discharge system; replacement of old faucets and sinks and plumbing where needed; mitigating erosion near the buried septic tank from roof-top drainage.