This project was made possible through the partnership of Water Charity and the National Peace Corps Association and Water is Basic, working with WiB South Sudan Director, Bishop Taban and the local leadership in Yei River State. We are pleased to announce that the project to deliver water filters to Yei River State was a success. 1,000 Sawyer Hollow Membrane Filters were distributed in this phase of the overall effort from 2017 into 2018, and all recipients received training on the use and maintenance of these life-saving devices. It is a part of our ongoing Filters For Life Initiative – Worldwide.

The program began with Yei River State and extended into Gogrial State and Kajo-Keji in Central Equatoria State. All of these areas experienced conflict and displacement during this time, and the water filters have been a lifeline to those on the move. The distribution and training of how to use these filters continue in areas of greatest need.

Our work has always been about local solutions. Another goal from day one has been to provide clean safe water to as many people as fast as possible. 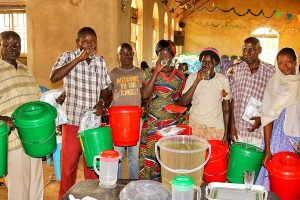 Here in South Sudan, we have done a lot of work with our friends Water Is Basic, a local South Sudanese organization birthed from decades of war, made possible by a joining forces of key religious leaders and humanitarians in South Sudan.  Clean water is more than basic, it is essential to life itself. When scarce, it steals the very life of a nation by undermining a family’s ability to become economically independent, educated and a productive part of society.

Together, WC & WIB have been hard at work helping local communities establish what we enjoy, and so often take for granted: a regular supply of safe, clean water.

This project is to provide 1,000 water filters in 3 states.

When civil war broke out in 2013, many people had to leave their villages. Some left for refugee camps in Uganda or The Democratic Republic of Congo. Others fled to the bush or to Internally Displaced Person Camps within the border of South Sudan. Wells were abandoned and left to rust. Other wells were broken because of overuse with so many displaced people sharing them. An increase in cholera and typhoid comes with disruptions to clean water supplies.

In addition to the many well installation and rehabilitation projects we have done (see our South Sudan Well Rehabilitation Program), we have also decided to get water filters to the people, so families could have instant and portable safe water.  With so many people still unsettled, and drinking from dangerous, dirty water sources, having the ability to clean their water on the go was essential in our opinion. 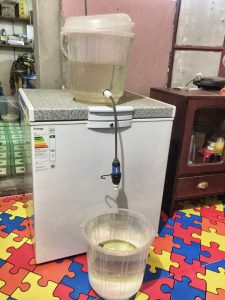 Water Charity has been using Sawyer Filters for a very long time.  We were, in fact, one of the first water charities to implement the technology for humanitarian purposes, and have been working with them as they developed this aspect of their product, which had been primarily for camping/survival type markets. The Sawyer filter has the potential to last decades, it is portable, and can give 500 liters of clean water per day serving up to 100 people per day. They remove 99.999% of the pathogens that make people sick and so often lead to death. (see some of our other Sawyer projects by clicking here)

There are a number of models, but the system we used was their Point One model and included a filter and a bucket. It’s a simple design with no technical training required and no moving parts to break down. The 0.1-micron filter is affixed to a plastic container. When contaminated water from any source is filled into the bucket, gravity does the rest. When the filter clogs or slows, a backflush syringe or cleaning plunger, included in the filter kit, is used to simply backwash the filter.  Even the muddiest, most turbid water (the sort refugees might find in the arid brush), can be rendered clear and safe with this filter.  There are no known pathogens small enough to pass through .1 micron holes.

The overall goal was to distribute 10,000 filters to areas of greatest need in Yei River State and for the leaders to receive training to properly train their communities in use and maintenance. That goal was met, and 1,000 of those filters were generously funded by Water Charity donors through this program.  With each filter, individuals also received one bucket and the training to use them properly. With the need being so great and the amount of displaced individuals so high, families shared their filters meaning these 10,000 filters have impacted more than 200,000 South Sudanese in their toughest hour. 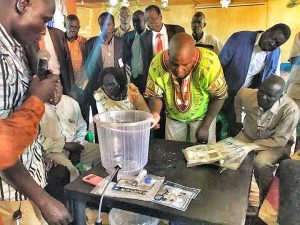 Governor of Gogrial State learns to use the water filters​

The first demonstration took place at the Water is Basic headquarters, the EPC Center in Yei, when our longstanding friend Gregg Keen of Sawyer Filters showed how a filter cleans dirty water. Fetching water from the Yei river and pouring it directly into the bucket attached to the Sawyer filter, community members and leaders were astonished to watch him drink the filtered water. (photo and video included) News spread to community leaders and plans were made for filters to be delivered and training to take place so that leaders from all over Yei River State would be empowered to equip their communities to use the life-changing filters. The need was there and the community leaders were ready to train and deliver. All that was needed was the funding to purchase the filters. Water is Basic and Water Charity worked rapidly to raise the necessary funds. 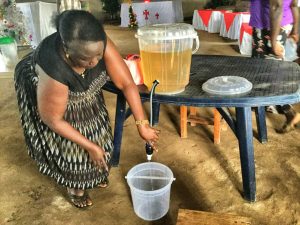 In December of 2016, the first shipment of filters and buckets were delivered into Yei, South Sudan from Uganda. As the community gathered to learn more about the difference a filter could make for their families, Dr. Timothy Isabu, resident doctor at the EPC Clinic, demonstrated the power of the filter by drinking water from the dirty Yei River himself. (see video and photos)

Richard Khemis and his wife Christine received one of the first filters to be distributed in Yei. Their daughter, Abby was just under two and struggled with typhoid because of the quality of the water she was drinking. Because they now drink clean, safe, filtered water, Abbey is healthy, no longer battling high fever, diarrhea, and vomiting. (photo included)

On December 13th, 2016, Anngrace Asha Taban, wife of Bishop Elias Taban of Water is Basic, trained government officials and NGO representatives on the use of the water filters. On that day, 1,500 filters were distributed. 88 filters were distributed to civil servants including Deputy Governors, Ministers, and Commissioners. The Minister of Health attended the training as well, proclaiming that it is more costly to treat preventable diseases than prevent them. He stated, “We shall continue to hold our hands together to make sure that Yei River State is free from preventable diseases.” (video and photos included)

Training and distributions also took place at various local gatherings such as Christ the King Catholic Church in Yei. (video included) Once the community members saw evidence of how the filters worked, they proclaimed they would “treat them like a baby.” To worry about the safety of your children in a conflict area is traumatic enough. Mothers were filled with the assurance that at least they could provide the basics of clean water for their children despite the uncertainty of where they would find their next meal or perhaps where they would need to seek shelter in the likely event that they would need to flee for security reasons. 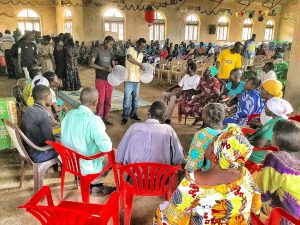 News rapidly spread to neighboring counties and states and throughout 2017, while the Water is Basic team continued to restore wells, the number one priority was to train County Commissioners, Community leaders and State Officials so that they could get the filters into the hands of the people in their areas that needed them the most.

The local leadership in Yei found that not only were the filters providing emergency relief and saving families from the added costs of medical bills, but they served as tools for peace at the grassroots level. Leaders of opposing forces SPLA (Sudan People’s Liberation Army) and SPLA-IO (Sudan People’s Liberation Army- In Opposition) were willing to come out of the bush and the barracks to lay down their arms in exchange for a filter and a chance to sit down at the negotiating table to peacefully discuss their grievances. Around the table and around a filter, just like around a well, all have the same basic human needs. Dialogue at the grassroots level plants seeds of reconciliation and healing as the haze of conflict lifts and hope for a path forward can be grasped.

Our local team and their local partners had the opportunity to share this model with leaders of Gogrial State. On July 4th, 2017, two leaders from warring clans in Gogrial State visited Yei River State to discuss how to handle the fighting between their people. They learned how the water filters were a tool for health and for peace. Lieutenant General Salva Matok of the Apuok Clan and Honorable Machok of the Aguok Clan participated in their first peaceful dialogue in Yei that day. Plans were laid to deliver filters to their state and on July 31, 1,500 filters were shipped to Gogrial State. (video and photos included)

In November of 2017, the four Commissioners of Kajo-Keji of Central Equatoria State visited the Water is Basic headquarters in Yei to learn how to train others in the use of the filters in their counties. (video and photos included) Later that month, conflict-hit in their area resulting in 17,300 displaced people with the majority reported having crossed to Uganda (UN). Thousands of filters were in the hands of people who had to flee to the bush, to other communities, or to refugee camps in Uganda.

Filters continue to be distributed to areas of greatest need and stories of relief, peace and health because of the filters continue to pour in from South Sudan. We are grateful to our donor, who chooses to remain anonymous, for providing the funds for this project.  We encourage people to continue donating to this program so that the partnership Water Charity has established in South Sudan can continue to uniquely reach people in one of the most troubled countries on our planet. In the context of a civil war, this partnership in bringing clean water solutions provides a lifeline to people in areas that public and private services fail to reach. 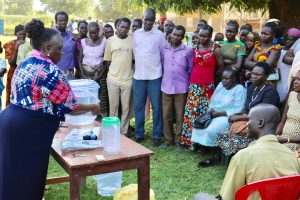 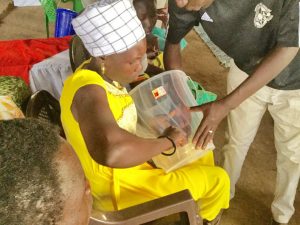 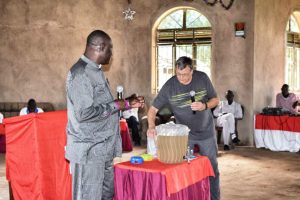 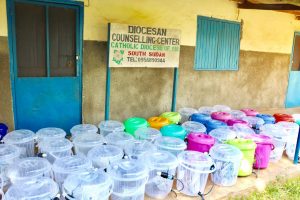 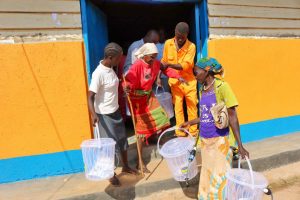