Water Charity’s co-founder and COO Averill Strasser, and Executive Director, Beverly Rouse, had the opportunity to meet with Peace Corps Director Carrie Hessler-Radelet when she was in Long Beach this week.

At a presentation at Cal State University Long Beach (CSULB), Director Hessler-Radelet, along with CSULB President Jane Close Conoley and Rep. Alan Lowenthal, D-Long Beach, unveiled a new program that will allow students to serve in the Peace Corps and earn a master’s degree in geography or linguistics.

Since the Peace Corps was established, 777 alumni from CSULB have traveled abroad to serve as volunteers, with 31 alumni currently serving. 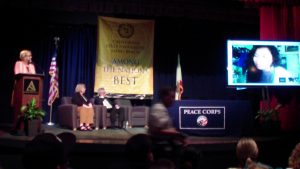 In a recent trip to Senegal, Averill and Beverly had the opportunity to meet with Socorro at her village and consult with her on the work being done.

Averill Strasser is an RPCV, having served in Bolivia from ’66 to ’68. He serves on the Board of RPCVLA as Liaison to the National Peace Corps Association (NPCA).

Director Hessler-Radelet acknowledged the role that Water Charity is playing in helping serving PCVs around the world to do water and sanitation projects.