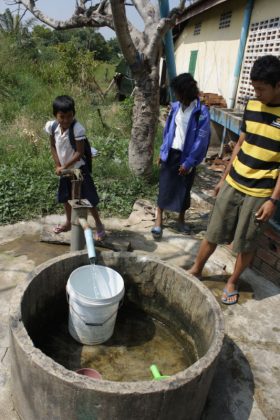 Originally focused on sheltering and supporting HIV/AIDS children, the orphanage grew to include children who are victims of trafficking, extreme poverty, and abandonment, the living casualties of decades of warfare in Battambang Province, a place long considered the last stronghold of the Khmer Rouge, where the guerrilla activity took place long after the fall of the regime. 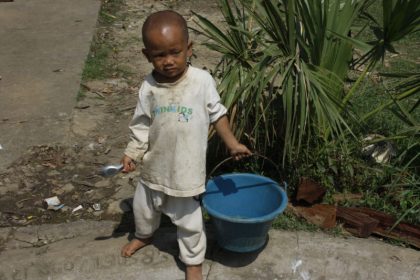 One of Battambang Province’s 13 districts, the Sangker District includes communes with large numbers of returnees from the Thailand border war refugee camps, considered to make many communities, including Odambang 2 Commune, vulnerable to numerous psycho-social and cultural challenges. Just as in 1992, it continues today that the residents of the orphanage experience public discrimination and fear as HIV/AIDS, human trafficking, and extreme poverty continue to be misunderstood and demonized problems in this predominately Buddhist society still suffering post-war PTSD in many respects.

A little over a month ago, at the height of Cambodia’s rainy (monsoon) season, the solar-energy powered water pump connected to a 48-meter-deep well servicing the Wat Norea Peaceful Children’s II orphanage broke. Fifty-four children and seven staff were suddenly left in a precarious potable water situation.

Luckily, they had what they hoped was a short-term solution, an antiquated shallow well and rusted and broken hand pump. However, the water in the shallow well is finite and should only be counted on for short-term emergency use. 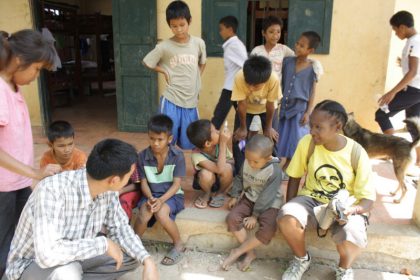 Until such time that the pump can be replaced, the children and staff have all changed their living routine to include three water-pumping and carrying sessions. Water collection begins at 4:30 a.m. every morning with the older children helping the younger as even a 3-year-old has a small bucket containing a cup or two of water that he also carries as he insists on being a part of the special activity. The stronger residents carry large buckets of water from 2 or 3 to 60 meters from the pump to supply the kitchen, 6 small outdoor toilet/bathroom stalls, and the guesthouse bathroom.

The 2 blue-colored 2,000-liter water holding tanks have long been emptied as the orphanage historically uses approximately 2,000 liters of water per day.

Project Description
This project is to replace the broken solar-powered water pump at the orphanage.

The orphanage will contribute $250 for the project.

The pump will be installed in a couple of days by a trained installation crew.

Project Impact
This project will benefit the 54 children ages 3 to 17 at the orphanage, plus the 7 adult staff in residence and their families.

In addition, the people who sometimes attend events at the center will benefit. An example of the type of events hosted is a 2-day program offering free medical check-ups and general non-surgical treatment to all of the orphans and poor children throughout the Sangker District. It is estimated that over 1,000 poor youth and adults will be treated.

Comments
This is a crucial problem affecting the health and wellbeing of a vulnerable group. It can be resolved by immediate intervention, on a level that is modest by any standard. If only other difficulties could be remedied this quickly and easily….

Dollar Amount Needed
$0.00 – This project has now been fully funded through the generosity of friends and family of PCV Darlene Grant.

We encourage others to continue to donate using the Donate button below, and we will notify Darlene of your donation. Additional funds will be used to fund the next project by Darlene and/or those of other PCVs in Cambodia.