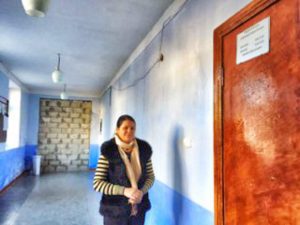 The Village of Costesti is a large village 25 kilometers south of the city of Chisinau. The population is 12,068; 5,900 are male and 6,168 are women. It is considered to be a middle-class village and one of the largest cities in Moldova. Being middle class does not exclude Costesti from the problem of eroding the population.  There are approximately 2,036 people working outside of the country to support their families.  Population erosion causes a negative effect for most of the 2,646 children in Costesti, who are being raised by single parents, grandparents, or other family members. Also, this has a huge impact on senior citizens who are left behind and sometimes forgotten by their children who have left in pursuit of a better life.

Costesti is an agricultural village with rolling hills of vineyards.  All of the homes have gardens in the yard. Moldova’s central and southern regions are one of the main destinations for grape storage, offering many refrigeration storage facilities. The village center is composed of a small marketplace, a small medical center, and Mayor’s office.

The largest building is the Casa de Cultura, an important building utilized for community cultural events and weddings. The library and NGOs are located in the same structure but are independent to the bathroom and water amenities.

The library is a popular place for the children in Costesti, offering the only place to congregate with their friends. Computers and the Internet draw many children and adults to the library. On a weekly basis, there are 350 people who visit the library to use technology, read a book, check out books or attend computer and English language classes.

Prior to July 2015 the Mayor of Costesti wanted to close the library saying it was an additional unnecessary expense for the village and cut funding.   It wasn’t until the new Mayor, a former high school director, was elected, that the library has had hope for a future. The library is slowly coming to life by the determination of the librarian. However, growth has been a struggle with the lack of sanitation. 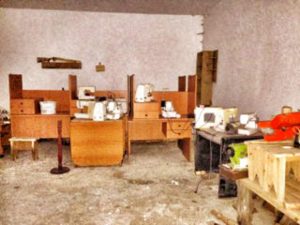 The other wing of the building was the former home of a women’s career training center. These women were survivors of human trafficking. The training center was equipped with sewing machines, irons and machinery for woodworking. This equipment was ruined by flooding that was caused by an outdated sewage system, and the project was forced to close.

Currently, on the first floor, a social canteen feeds over 25 seniors every morning.  On the second floor, there was a youth-friendly health center, a training center, and a small medical clinic, but they were forced to leave due to the unsanitary conditions.  A new bathroom was installed in this wing. However, due to the sewage backup, it remains inoperable in winter and when it rains.

These two wings of the Casa de Cultura have a future of becoming a social center for Costesti and neighboring villages with the installation of a new sewage system. The woman’s career training will return, more youth training can be held in the 2nd floor and the seniors will have better sanitation and safety. The community’s ultimate goal is for this building to be the social center for youth, children, families, and seniors for Costesti and neighboring villages. 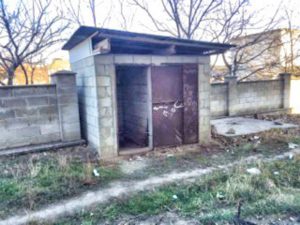 The community is asking to have a space for the young adults to participate in life skill classes, dance, or create. Parents of Costesti are asking for a place to bring the children. Seniors need a place to sit and relax. Repairing the sewage in this building will be the first step in providing a safe and sanitary place for these citizens.

It was suggested to install the bathroom in the corridor of the library opening it up to the public who will visit this site.

Past experience with the installation of a new bathroom proved unsuccessful, causing flooding which closed two social projects in the building. To provide toilet facilities to this building the sewage system must be upgraded and connected to the main sewage line in the village. Thus, the first project is to fix the sewage problem, providing sanitation and safety to citizens utilizing the social canteen and attending events held by Avante (NGO).

Project Description
This project is to install a bathroom for the visitors at the library, and to redirect the old sewage system from the NGO building to a newer system, solving the problem of flooding.  This will leave the Casa de Cultura with bathrooms year-round in both wings. 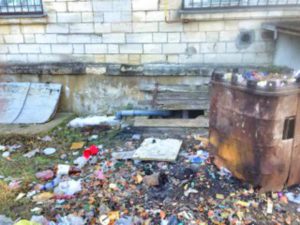 The community contribution will be the connection of the sewage system to both bathrooms located on the NGO side of the building and the proposed bathroom for the library.

Re-directing the sewage system will stop the flooding that had caused damage to the equipment used by the social integration of women project, and the loss of Avante medical assistance project. The building houses two NGOs that had lost the ability to continue these two projects due to the flood. Once this system is fixed the NGOs will re-instate these projects and will proceed in starting a new youth center in the building.

In designing the project, the installation of the bathroom was reviewed and it was determined that more rings would need to be added to the current sewer system, and eventually run PVC pipe through the main sewage system to the road 35 meters from the library. The village’s responsibility will be the rings to expand the sewage system and a concrete cover to minimize odors from the sewage.

The village engineer, who is familiar with the project, suggested the re-direction of the old system in the social services side of the building directly to the street. Doing this will eliminate the flooding issue, and save the extra expenses of concrete removal and  PVC pipe.

Step one is to develop documentation and technical design of the bathroom and sanitation.  This will be completed by the Mayor’s engineer specialist and registered as a technical project complete with Mayor’s stamp.  This will be completed in March-April, 2016 and Mayoralty Costesti is responsible for this step. Currently, the mayoralty has a specialist who is responsible for the project and knows a company that can provide such services. 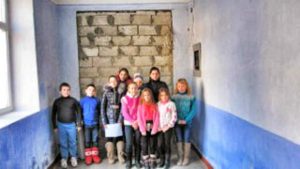 Step five is connecting the water to the central sewer system, which is planned for June 2016.  The construction company is responsible for this step.

Step six is for the sewage system and library bathroom to be operational.  This is planned for June 2016 and the group of project implementation is responsible for this step.

Step seven will be a club training for young women’s leadership and participation in community life in June 2016 by Cynthia Katocs and Maria Bivol.

Project Impact
This project will impact around 500 people, and likely a lot more, as the Casa De Cultura becomes more used by the community.

Monitoring and Maintenance
Visitors to the library and enrollees to the Women Social Integration Project will be asked to keep the facilities clean, and social workers will maintain them.  The mayor’s office will be responsible for maintaining the sewage system.

Comments
This project will improve the working conditions of 11 social workers and the 450+ monthly beneficiaries visiting the building by installing a bathroom and renewing the drainage system for the public library, health clinics, and Non-Governmental Organizations.  This should increase the number of beneficiaries to social services and the library, and will help reinstate the Women Social Integration Project, thus increasing the number of people using the facilities.