This project has been completed under the direction of Elise Kittrell and Caitlyn Peake of Green Empowerment. To read about the start of the project, CLICK HERE.

The project was designed to build a water system in each of the three communities.

A summary of Caitlyn’s report is as follows:

Funding from Water Charity and funds redirected from the gradual drop-out of Telembi (see below) were used to cover costs not included in the initial budget: an elevated platform for bio-sand water filters in San Miguel and a gasoline generator to provide backup power for the system’s electric pump (allowing for the investment of local funds in food for communal workdays) and extension of Guadual’s system to the satellite community of Madronal. This 1.5km extension provides service to eleven additional households, improving unity within the area and avoiding the financial unsustainability likely to impact an independent system serving only these families. 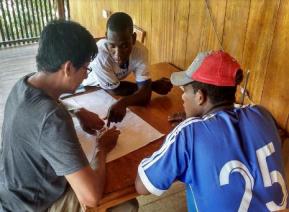 Prior to system construction, a series of community meetings facilitated by GE and ALTROPICO staff resulted in the election of six-member local water committees in San Miguel and Guadual, with a focus on gender equity in each committee. Committee members were given responsibility for the local organization of system construction. Initial hands-on training for technicians was accomplished prior to construction, permitting greater local participation in tasks requiring skilled labor and more experience for new local technicians in San Miguel and Guadual. Administrative training for both water committees and community-wide WASH workshops began in mid-September and was completed in late 2018. 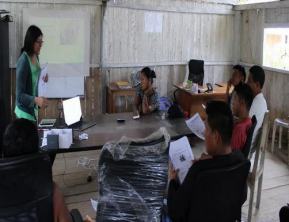 While advances in Guadual and San Miguel were impressively rapid, implementation in Telembi was delayed as the community struggled to meet its obligation for co-financing through the initially agreed-upon $20 per-family contribution, with support provided by the local credit union for Telembi’s lowest-income residents. (Telembi does not participate in Sociobosque). Elected water committee members pressured their neighbors to make these payments, pointing to the success of systems in Guadual and San Miguel Negro. ALTROPICO and GE agreed with community leaders to establish a deadline for a final community decision (November 2018), but also began scouting additional communities in the area in case Telembi was unable to continue. 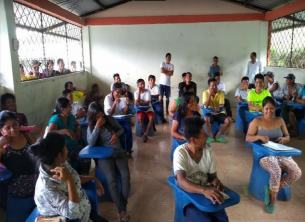 Following the mutually agreed-upon timeline for community buy-in in Telembi, local leadership informed ALTROPICO in November that the community was not currently willing to collaborate on a water system under the terms specified. Following this communication, GE and ALTROPICO reached out to the previously-identified Chachi indigenous communities of El Encanto (27 families, and a school) and Rampidal (53 households and a school), which were the best suited to serve as replacements due to their relatively similar total population and similar logistics costs to Telembi, in addition to a willingness to quickly invest community Sociobosque funds in water systems. 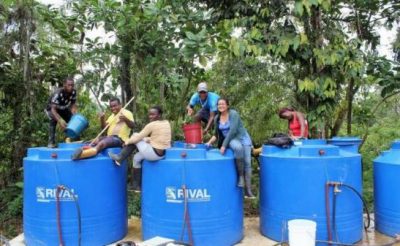 Final system designs for these two communities and materials pricing was undertaken in November 2018. Initial WASH training for both communities was also undertaken in November as part of Elise Kittrell’s visit, as was a preliminary selection of local six-member water committees. Unfortunately, Sociobosque disbursements from the Ministry of Environment were significantly delayed, only arriving in community coffers in late February 2019. Acquisition of $6,000 in materials purchased by the communities and complementary materials supported through the project occurred in March, and materials were finally delivered to these two communities on April 5th, 2019. 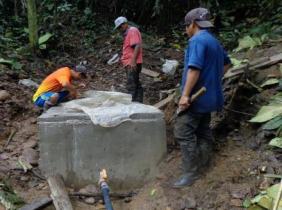 Following materials delivery, initial training sessions for both communities’ six-member water committees was undertaken in late April 2019, and construction began in Rampidal in early May 2019. While field technicians attempted to work simultaneously in both communities, the difficulty posed by canoe transportation between the villages prompted the decision to finish construction in Rampidal prior to making significant construction efforts in El Encanto. System construction was accompanied by community-wide WASH workshops in both villages, led by Green Empowerment field staff, and water committee administrative training led by ALTROPICO. 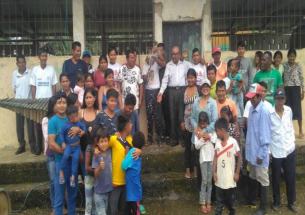 Despite delays created by dryer-than-expected weather (impacting transportation of heavy aggregate materials via canoe) and a temporary lack of qualified personnel to install droplines for both systems’ electric pumps, system construction was completed in Rampidal in late June 2019, and the system in El Encanto was brought online in late July 2019. The systems, both incorporating bio-sand filtration, chlorination, and metered household connections, were formally inaugurated in mid-August and have continued to function normally over the last two months.

The community water systems in San Miguel Negro (48 households) and Guadual/Madronal (43 households) have continued to function smoothly over their now nearly one year of operation. Water committee members in both communities reported >90% of families making on-time payment of user fees, demonstrating the efficacy of local management and community recognition of the improvement in quality-of-life represented by the systems.

Work on three community water systems supported through additional Phase II funding for GE and ALTROPICO’s efforts will facilitate monitoring and support over the next few months for the four systems installed through this project, as GE and ALTROPICO maintain their presence in the Rio Cayapas watershed. An invitation from the Ministry of Environment’s Sociobosque program allowed the organizations to present our model of community support for WASH infrastructure to a broader audience of potential beneficiaries in late July 2019, leading to a number of additional requests from communities with available Sociobosque funding and a waiting list of additional implementation sites that the organizations will target over the coming years.

We extend our thanks to Elise and Caitlyn for completing this important project. We are grateful to the Paul Bechtner Foundation for providing the funding.