The project was to build 10 latrines and repair another 6 latrines around the village.

My project is completed and I wanted to give an update.

19 latrines were built, over the anticipated amount, and the village now has a latrine at every private residence.

With Water Charity funds, I purchased the cement and rebar. I then paid Wurey Camara, a truck owner from a neighboring village, to transport the materials. The six masons were joined by another mason from Tambakounda, Latin Kamara. They quickly and efficiently constructed the remaining latrines, including a latrine at the mosque and other public locations.

This quick injection of hygiene led to fast results, and a further appreciation of the importance of hygiene, which had inspired this project. After the completion of these final latrines, the people of Thianguey have dedicated themselves to making the village free of open-air defecation.

As a village elder, Bubakar Soiree, told me, “there is now no excuse except for that of youth.” The areas that used to smell of human waste simply no longer do, as these areas are not used anymore. The people of Thianguey and I are excited to see the possibilities of a new future with less chance of disease.

I’d like to thank Appropriate Projects for making this great advance possible; in my two years as a volunteer I never interacted with any other organization with such understanding of conditions on the ground and dedication.

We, in turn, extend our gratitude to Cameron for his work in completing this project. 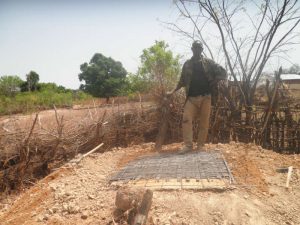