This project near Kaimoh Village in The Gambia, and done in concert with our local partners GambiaRising, was successfully completed. All 4 of its elements were accomplished.  This has substantially improved the situation at the school and for the nearby villagers.  A few reports follow.

CLICK HERE to read the original project page for this project. While this project has been fully funded, if you would like to see more projects like this, consider DONATING to Water Charity. 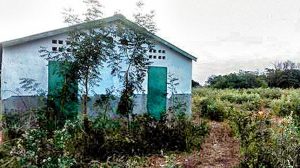 The St. Matthew’s Basic Cycle School in Kaimoh has 281 students and 16 teachers. Half of the students are girls and half of the teachers are women, as is the Principal.

The project had four distinct aspects: the school well, the school garden, school handwashing stations, and the school’s toilets. 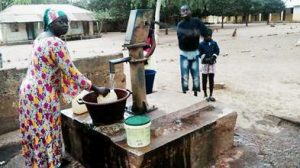 he school’s well had ceased to work. Professional repairmen were brought in to replace the worn-out parts, and to conduct routine maintenance.  This immediately solved the crisis of having no source of water for the school.

It also provided water for the next phases of the project, in which we’re building bricks for the renovation of the well’s wall, and for mixing cement for the new garden fence.

The well’s design directs well water spillage into the school’s garden, and so once repaired, the garden could then also once again be irrigated.

In every aspect of the project, all labor was provided by community members and school teachers and staff, with the exception of the skilled labor provided for the well repair, and payments for hauling of sand and gravel for making cement for building bricks and the garden.

The first priority was the repair of the well, since the school had no water.  A professional repair team submitted an estimate and when approved, brought the materials and replaced the old and worn parts. Routine maintenance was also conducted. 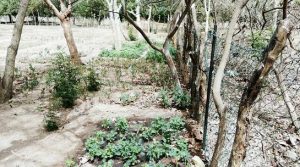 When the well was repaired and water was flowing, sand and gravel were hauled so that the work could begin on securing posts for the garden project.   The garden’s fence needed a great deal of repair and was routinely breached by goats.  Instead of attempting to patch it, a new fence was installed.  This fence was placed in such a way as to expand the garden.

The garden is designed to be irrigated by the well and by routine run-off from the spillage at the well. The irrigation canals were renewed and cleaned so that water could flow more easily.

Much of the garden would still be watered by hand, and watering cans and tubs were also purchased.

The wall around the well was also re-built with hand-made bricks, then painted and decorated with messages.

The school’s 281 students and 16 teachers had 6 traditional latrines for their use.   More than 10 years ago, the government, funded by a UN grant, had built a building with 4 flush toilets for the school. However, since it did not provide a source of water for the gravity-fed toilets, they have never been used. 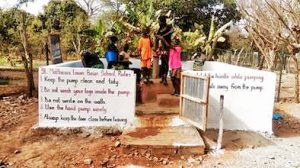 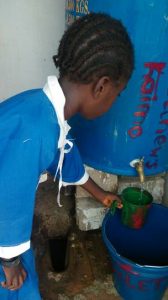 and used as handwashing stations, using the drainage of the sinks.

When a better exchange rate produced more dalasis than planned, it was decided to acquire two additional spigots barrels for the traditional latrines as well, along with cups and kettles to be used inside the latrines for washing privately.

The staff , pupils, and the entire community of Kaimo wish to thank WaterCharity for the assistance rendered to St.Mathews LBS. This is ranges from the garden fence, hand pump repair and maintenance, and toilets and hand washing stations.

The provision of the garden fence has increased the production and productivity of vegetables. It has motivated the Mother’s Club of the school to take an active part in the garden.

The support WaterCharity gave us has really changed the school environment, thus making us a model school in the area.  We promise sincerely to take care of all the facilities so that they will serve us for a long time.

THANK YOU SO MUCH. You have made us proud.​​

CLICK HERE to read the original project page for this project.

While this project has been fully funded, if you would like to see more projects like this, consider DONATING to Water Charity. 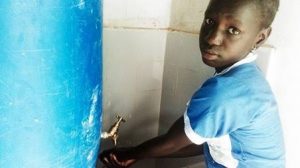 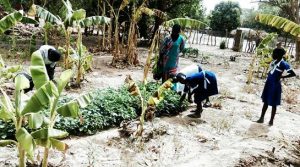 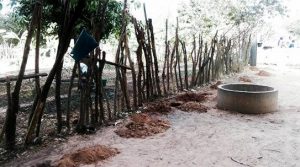 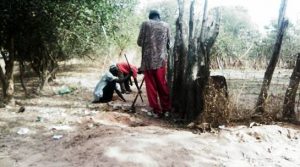