This project has been completed under the direction of Peace Corps Volunteer Dave Rowson. To read about the beginning of the project, CLICK HERE. 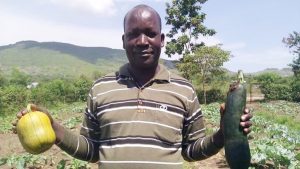 The project was to build a water system for irrigation. Although Dave was forced to leave the site during the implementation, he followed through to ascertain that the project was completed, and continues to work to further the concept.

This project has become a part of The Shamba Project, leading to its continuation and success. Mr. William Obwaya created a program to keep students in school when they could not raise school fees. In order to fund the children’s fees he began to farm the school’s agricultural land.

The shamba now produces greens and vegetables for the school, which is a savings, along with produce sales which fund needy students’ school fees.

A secondary benefit was achieved through the students themselves. Students spend time in the shamba planting, weeding, harvesting and learning how to become self-sufficient.

Water Charity funds paid for the water tank and hosing and couplings. I was initially concerned that the tank was smaller than we had paid for. As it turned out, the owner fixed two additional tanks and built the support structures for them.

One of the most serious problems affecting all aspects of life on Rusinga Island is the lack of sustainable agriculture. Most landowners on the island plant only in the “long rains” season in the spring. The resulting harvest is at the mercy of the rains. Many times the crop is less than acceptable or not at all.

The Shamba Project was initiated to get arable land into production on a year-long basis, to supply security against goats and hippopotamus, and to provide training, seed, and equipment to insure a successful operation.

The project was extended to give grants to qualified applicants who wish to improve their yields by applying permaculture practices. The project not only provides economic benefits to the farmers, but also yields fund for the payment of school fees.

The money from Water Charity is and has been very instrumental is water storage and encouraging Rusinga farmers.

The project demonstrates the efficacy of creating a successful model for others to replicate. We are grateful to Dave for completing this project, despite the adversity, and for continuing to work on extending the concept.

We again express our gratitude to Michael and Carla Boyle for providing the funding.