This project is made possible through the partnership of Water Charity & NPCA, working with Water is Basic.

*Note: This Phase has been completed successfully. Scroll down below to find reports on the #Conclusion. There is also some raw video below from the work in progress.* 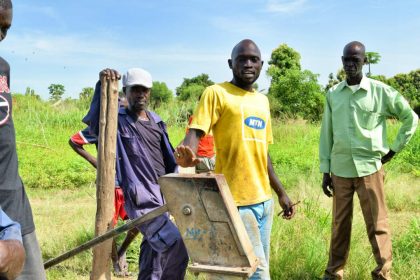 This effort to repair 20 boreholes constitutes the 4th phase of our extensive South Sudan Well Rehabilitation Program.  This program has been underway for a few years now, and Phase IV will bring us to 48 boreholes repaired.  Our current estimates are that well over 100,000 people will have benefited, once these 20 wells are complete… which will serve 50,000+ people alone.

We will be posting the borehole repairs 5 at a time over the coming days and weeks.  These pages will also contain updates, and the conclusion materials, so come back and check up on them from time to time.

It is difficult to predict the results of this work in general, and especially so in South Sudan, where there are a large number of “internally displaced people.”  But now that we’ve been doing this well rehabilitation for a while, we have been seeing a number of recurring side effects from this activity.

Both of these effects were somewhat unexpected when the South Sudan Well Rehab Program started, but now we see this as a reliable truth in the region where we are working.  The upshot of this is that we have been serving more people than we originally thought we would (not even counting the people who come from neighboring villages to get water while their own boreholes are waiting to be repaired)…. and, that this effort is also forwarding the peace efforts. 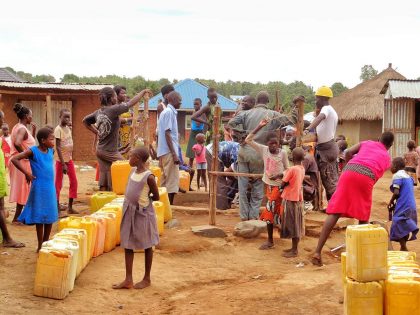 The Republic of South Sudan was birthed on July 9, 2011. The newest nation on earth began without paved roads, with few doctors, hospitals or schools, and with an illiteracy rate near 90 percent. This was true nation-building from the basics of water, to the intricacies of government and legislation.

In December 2013, conflict ignited between forces of the government and opposition forces leading to the current civil war. Because of this conflict, wells and committees were abandoned, and now the majority of them must be rehabilitated.

In June 2017, our local partner’s Water is Basic, helped facilitate a grassroots peace accord mediated by Bishop Elias Taban.  The Bishop is actually the Director of Water is Basic – South Sudan. He has always been a champion of reconciliation and development in Yei. 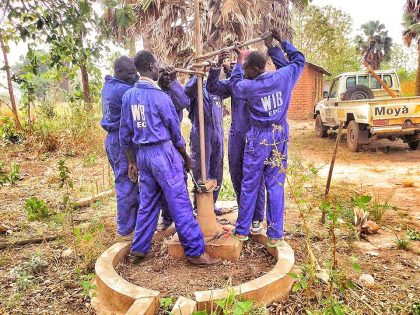 Also in attendance was Steve Roese, President of Water is Basic USA, whose long-term presence (12 years) continues to be a great encouragement to those seeking peace in South Sudan.

Because our partners have been there from the beginning, were birthed at the grassroots level, are guided by local experience, and our projects are implemented by men and women who get what it means to go thirsty… these borehole repair projects have been wildly successful. These efforts have also given them a seat at the table of peace negotiations between the government of South Sudan and the SPLA-In Opposition, or rebel groups.

Water is life, but it is also paving the way to peace.

Because of the recent peace initiatives in Yei, many South Sudanese are returning to their communities or making their way into abandoned villages that are closest to where they have had to resettle. Water Charity, in partnership with Water, Is Basic, is working to restore wells in these communities.  Along with the other organizations also working in the region, they are being done at a rate of two to three per day, so those that remain and those that are returning will have the basic necessity of clean water. 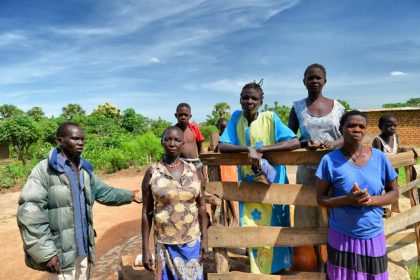 We are so grateful to our Water Charity Donors (you know who you are) who have empowered these local teams to restore wells in communities that once had the benefit of clean, accessible water but who are now suffering without. So many of these families have the added burden of trauma with the recent conflict that has been ongoing in Yei and surrounding areas. Many have had to seek refuge in the bush or neighboring countries in refugee shelters. With peace being realized in Yei, hundreds of people a day are crossing the border into South Sudan from camps in Uganda as they return home.

In May of 2018, our US team joined our South Sudan team to survey future repair sites and gain a deeper understanding of the current need and situation in Yei River State, South Sudan. While there, we visited the returnee center where hundreds of refugees returning home receive a bucket of essentials from Doctors Without Borders (photo attached). Arkangelo Sebit who works with the South Sudan Relief and Rehabilitation Committee said that hundreds a day are waiting at the border of Uganda to come home, but many are tired of waiting for transportation and decide to take the long journey home on foot.

Carrying the weight of trauma as returnees resettle coupled with the challenge of coming home to a rusted or broken well is too much for anyone. We are proud of the work that has been completed to allow them the space to heal, to work, to attend school, and to simply live. Clean water changes everything. 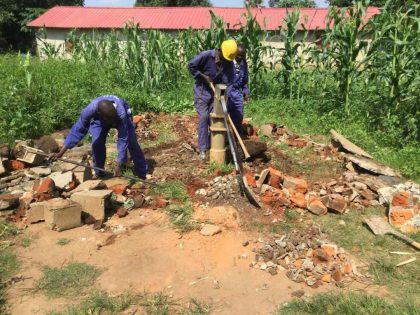 Providing increased access to clean water in Yei River State will serve to allow refugees and those who are internally displaced to return to their communities. Hundreds are waiting at the Kaya-Uganda border daily to return home. As they walk home, they need relief and water along the way. Restoring wells in these communities will not only provide water for those community members but will allow returnees to continue on their journey as water is vital to their resettlement.

1. Approximately 40,000 people currently without clean water will benefit from the 20 restored wells.
2. Relief for returnees from refugee camps or IDP camps as they journey home to their communities for resettlement.
3. Reduction in the number of people in Yei River State suffering from illnesses related to drinking unsafe water.
4. Reduction in time spent on fetching water for girls and women.
5. Increased number of girls who are able to go to school, thus minimizing risks of poor outcomes associated with lack of primary education (e.g., illiteracy, human tracking, and contracting STDs).
6. Increased number of women who are able to work (outside of the home) and contribute to the family’s financial stability.
7. Decreased health problems for girls and women related to carrying jerry cans for long distances.
8. Elimination of conflict and violence from conflicts over water.
9. Creation of employment opportunities for the people of Yei River State as a result of restoring the water wells.
10. Reduction of poverty and increased income for families as a result of not having to pay for water for neighboring villages.
11. Improved agriculture and work opportunities for Yei River State.
12. Improved social-emotional well-being for Yei River State’s people due to the elimination of water conflicts and from solving their community’s water problem through collaborative grassroots peace efforts.
13. Providing more learning opportunities to be shared with other organizations that are working on developing sustainable local solutions to local water problems. 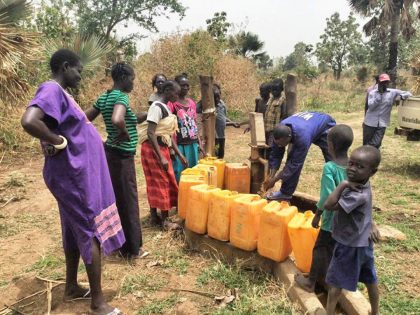 These 20 wells have been repaired in 4 groups of 5 wells each.  Detailed Conclusion reports can be found by clicking through to each of the 4 parts.  They are still being posted, so check back for more. 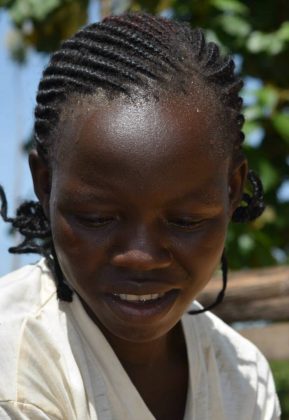 As a bonus to the work we have done to bring water to South Sudanese villagers, refugees and resettled people alike, water access has played a part in bringing peace to the country!  While the work was being done on these 20 wells, we were heartened to read the following message from the field:

Clean, safe water is essential to long-lasting peace. It’s on the minds of the local crew Water is Basic Crew every day. No one knows more than they do what a father or mother will do to gain a drink of water for their child. It’s why the local Water is Basic team hasn’t stopped a single day since their first well in 2008.

In the past year, as the five-year civil war waged on, we have joined many partners to provide food relief, medical resources, and funding for grassroots peace negotiations along with our regular everyday work of providing water. Collectively we have resourced our brothers and sisters in their fight for peace by investing over $100,000 in fostering peace from an iPad for a governor to boots for surrendering rebels, it all has greased the gears of hope. 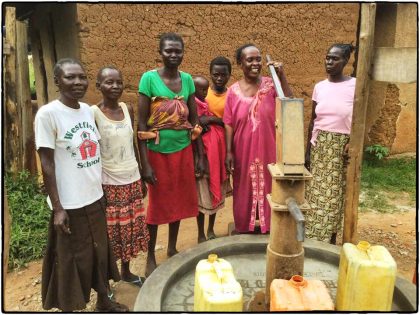 It is with tremendous joy and relief we bring you news that all parties have signed the peace agreement on September 12, 2018.

Wikipedia describes peace this way, “Peace is the concept of harmonious well-being and freedom from hostile aggression. In a social sense, peace is commonly used to mean a lack of conflict (such as war) and freedom from fear of violence between individuals or heterogeneous (relatively foreign or distinct) groups.”

The reality of peace best described by a good night’s sleep, a filling meal after a hard day’s work, watching your children study under the evening light and merely taking a nap under a mango tree (with both eyes closed).

WATER CHARITY would like to thank all the workers in the field (all South Sudanese) who put their lives in danger while going out to remote villages before the peace accord was signed and repaired wells for us in dangerous, unstable conditions.  They are all true heroes and their commitment to their people, the remarkable and resilient people of South Sudan, is truly admirable. 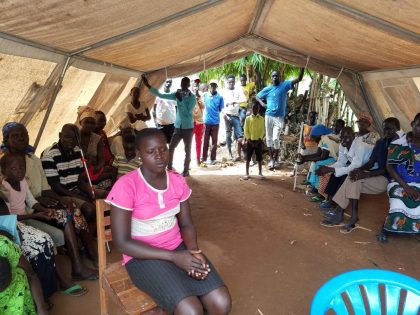 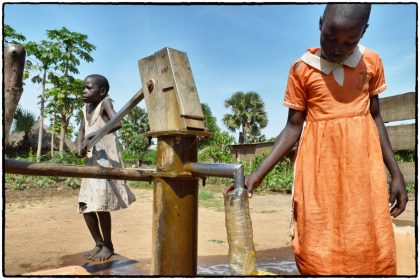