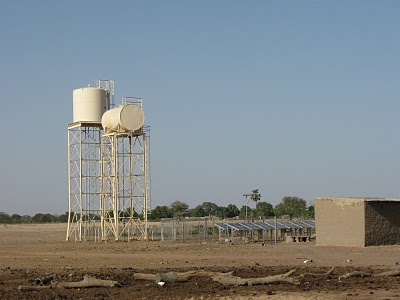 In 1998 a solar pump-powered tap system was built by an NGO in the town of Sanadougou to provide the town with potable drinking water. However, the delivery system has broken down over time, due to a lack of maintenance and repair, and now needs to be rebuilt to be effective.

The system consists of a groundwater pump and two water storage towers powered by an array of solar panels. The system includes a pump-serviced livestock-watering trough in the adjacent vicinity of the complex. In addition, there are 17 taps located in various places throughout the town.

At present, 14 out of the 17 tap heads are effectively useless, and an important pipe and the livestock-watering trough are broken beyond repair and cannot be turned off. The perpetually-flowing components create vast puddles of standing water which serve as a fertile environment for mosquito breeding. 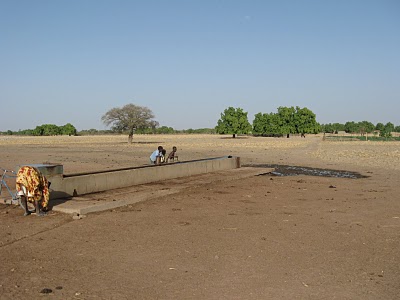 Since the water supply is often exhausted, the water quality of the tap water is poor due to rust build-up, and few people drink from the solar pump system. The people have resorted to the use of unsanitary uncovered wells in the vicinity, causing diarrhea, giardia, dysentery and worms in the community.

This project is to rebuild the broken solar pump-to-tap system by replacing the damaged taps with new lockable tap heads and repairing broken pipes and the broken livestock-watering trough. It will be administered by Peace Corps Volunteer Zac Mason.

The Water Committee will organize a system of assigning the keys to certain community members to make sure that only responsible adults can draw tap water, and they will implement a monthly payment system, to collect money for maintenance.

The Committee will pay for the transportation of the materials from Bamako to the village of Sanadougou. They will hire a local plumber to assemble the parts and a local blacksmith to weld the necessary pieces together. The Committee will also raise money from the villagers to help with the purchase of the new heads.

This project serves a town of 4,000 people. Repairing the existing system is an extremely cost-effective solution to the critical needs of the community. It is certain to result in a reduction of morbidity and mortality in the community caused by unsafe water.

We encourage others to continue to donate using the Donate button below, and your contribution will go toward Part 3 of this project.