Community Description
Sil Village has a population of approximately 2,000 people, although this fluctuates quite a bit when the farming season ends. The main form of income generation is selling peanuts as cash crops.

Sil acts as a logistic, religious, and social hub for the surrounding communities which are populated by about 10,000 people. The people are 100% Muslim, mostly split between two different “brotherhoods”. One of these brotherhoods, the Maurids, is headed by a Marabout whose family started the village three generations ago. This family holds the hereditary title of both the positions of Village Chief and Marabout.

PCV Derek Rush reports that, “Living in Sil has been an extraordinarily trying experience for me. Not only have I experienced a great difficulty with language, but the culture has given me more than a few moments of frustration. For example, when I first arrived in the village I tried desperately to find meaningful work and to get people organized. Meetings would start two hours late some days and others would not happen at all because I would plan them on days such as Sunday, which also happens to be the day of the weekly market. Slowly, as my language and understanding of the people improved, both my work and integration into the community have become easier, though daily challenges still exist.” 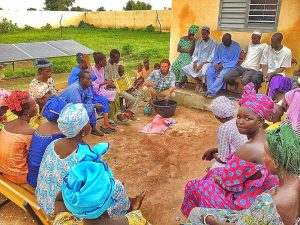 Problem Addressed
Traditionally, most latrines in the village have been constructed by digging a pit and then covering the top with either a cement platform or logs that are then topped with soil. Due to the sandy condition of the soil though, these latrines frequently experience collapses when the rains come and families commonly resort to open defecation in the bush until a new one is constructed. What is needed is brick-walled pits to support the latrine to prevent this.

Some of the difficulties facing this community are its geographic location and the difficulty of accumulating capital for such projects. The village is located 30 kilometers from the main highway and is mostly reliant upon the sale of peanuts for income. Because of this, financing construction projects is a difficult prospect.

Project Description
After doing a brief survey of latrines at the site, and having several discussions with village leaders, a plan was formed to build simple lined pit latrines for families that were willing to come to the planning meetings and related trainings. Of the more than 50 families who initially showed interest in the project, only fourteen have consistently come to all the trainings and meetings.

The trainings consisted of two 45-minute to one-hour-long talks covering the importance of latrines, how diseases spread from open defecation, hand washing, and how to build a Tippy Tap.

The objective for this project is to provide fifteen latrines; fourteen to families and one installed in the Health Post that is meant for the mostly Pulaar women who refuse to use the Turkish toilets and have frequently dig cat holes in the facility to defecate into. 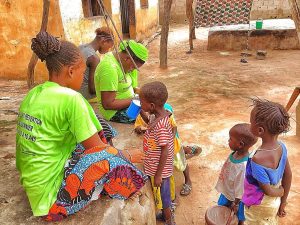 The intent is that these latrines will lead to a more sanitary environment that has fewer cases of diarrhea and other illnesses caused by open defecation. In addition, I hope that families will also adopt improved handwashing techniques for the same end.

Monitoring and Maintenance
Derek will be personally supervising this entire project from the purchase of the materials, construction of individual latrines, and follow-up home visits. These visits will be conducted to see how families are using the skills and knowledge which were taught at the community meetings.
Comments
This project has been nearly six months in the making. Derek admits that he learned a lot through this project and considered canceling it several times due to lack of community participation and lack of experience.  After he engaged in several long conversations with his community work counterpart, participating families, and health post staff in the village, they successfully collected all of the community contributions. People are beginning to collect the necessary sand and gravel to make the cinder blocks that will be used. 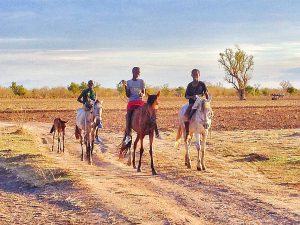 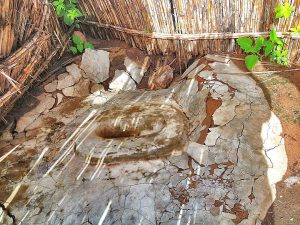