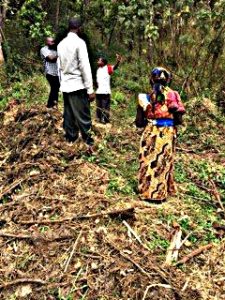 Community Description
Shule ya Tanga is located in Songea district, Ruvuma region on the Njombe road (B4 road). Its entirety is composed of a little more than 9,000 people and has multiple sub-villages to give a total of 15,000 people in the ward. Shule ya Tanga is comprised of a primary and secondary school along with a clinic that has one primary doctor, and four nurses.

Problem Addressed
The 9,000+ inhabitants of Shule ya Tanga consistently struggle with acquiring enough water for daily household use. There are only a few wells in the village, along with a small river, that often lacks water.

During the months of June to December, families endure the great strain of trying to obtain clean water. During these months, Shule ya Tanga experiences an extreme heatwave that causes all wells to dry up completely, except for possibly one or two wells still containing water. Even then, the water is brown, dirty and unusable. The small river that is located by the secondary school also begins to slowly evaporate, and can no longer support both schools and the village.

Due to the lack of access to clean water, women will begin washing their clothes in the river, and children will try to escape the heat by playing and swimming in it, causing the small remainder of the river water to dirty, and become unusable.

The existing water structures do not supply enough water for each individual to get at least one 20 L bucket a day. Women and children have to walk close to a mile or more to fetch water from the existing well or climb a very steep hill to get water from the river.

The Water Committee, with previous community funding, has tried digging more wells throughout the village, with the idea that there will be more access to water, but unfortunately, these wells have also been susceptible to the hot sun, and dry up during the dry months of June-December. They have tried doing a water catchment system, but since it only rains for 4-5 months a year, the water does not last for the rest of the year. 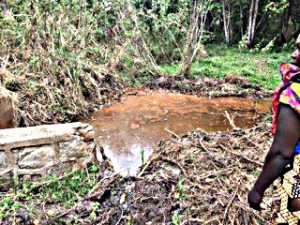 Project Description
This project is to dig a borehole in the spring, add a 10,000L storage tank, and install a piping system, supported by a solar pump, to provide water for the village.

Due to much of the construction being done by hand, the project will take three months to complete. The community will contribute 29% of the project amount.

2,000 TZS will be collected from every person over the age of 18, and about 35 men have been chosen to help dig trenches and lay pipes in the ground. This project will reach the north side of Shule ya Tanga, which consists of a population number of 4,500 people, and contains both the primary and secondary schools as well as the health clinic.

Once the project successfully brings the north side of Shule ya Tanga 10,000 L of water per day, a future project will be undertaken to bring water to the south side of the village.

Through talking to a variety of engineers, the Water Committee and the community leaders have compared and conducted price checks to receive the best possible prices for all the necessary materials. This village is very motivated and would like to see this project finished.

The Water Committee along with hired workers has started cleaning the spring (clearing away large grasses, shortening tree branches, and adding a fence around the location of the spring), and has set a schedule for once a month, to continue maintenance of the spring. 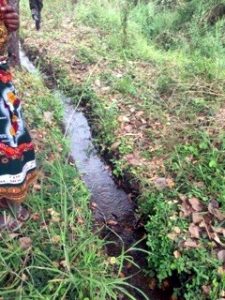 A borehole will be drilled no more than five feet away from the spring and a 10,000 L storage tank will be added. The spring water will be redirected through the borehole to continuously fill the storage tank and to ensure the quantity of water being passed.

Trenches will be excavated with a depth of 100 cm and 60 cm wide and pipes will be carefully laid and fitted throughout these trenches for about 2.5 miles.

A solar-powered generator will be installed near the water storage tank to help the consistency and pressure of the water while it is passed through the pipes.

Engineers will install one tap every hundred yards, for about 2.5 miles, including both school grounds and the health clinic, making a total of 10 taps.

The water from the spring will be made safe for drinking with the help of chlorinated tables called Water Guard. Water Guard will be added every few months/year, to maintain purity.

Project Impact
4,500 people will benefit from safe water as a result of the project.

Monitoring and Maintenance
The Water Committee has set an effective timeline for the project, to keep the project on track. The village has formed a sub-committee that is designated for this project alone, and each member has a designated role, that he or she will be responsible for. This includes a project leader (Mr. Patrick Mkanula), a secretary (Mr. James Lipala), an accountant/bookkeeper (Ms. Gelewada Mbawala), an elder adviser (Mr. Benedicto Liloka), and multiple people who are in charge of collecting the community contribution, as well as advising the project leader (Ms. Isabela Tindwa, Mr. Emanuel Milinga, Mr. Inocent Kapinga, and Mr. Jafethi Jumapili).

This committee will remain intact until this project is finished, and will continue the maintenance, as well as fix any problems that may occur in the future. They have agreed to meet the last Wednesday of every month to talk about the project’s effectiveness, continuance and any problems that are being faced.

The committee will also hold “town meetings” every 6 months to inform community members of the continuation of the water project and to hear any problems the community members are having with the new water system. By establishing this project, the Water Committee, and the new sub-Water Committee have learned the proper ways of budgeting and implementing a sustainable project. They have acquired the knowledge that is needed to successfully run a water project and to continue to expand in the future.

The engineers, who have developed the project, will advise and work closely with local engineers and hired workers of the village to excavate trenches, and will help/teach them how to fix any problems, should they occur. The workers and local engineers, along with the Water Committee, will continue to evaluate and monitor the project, after it is finished.

Comments
The increased accessibility to water will give 4,500 villagers more free time to develop private economic endeavors, to study, and/or to improve agricultural production. Access to better quality water will lower the cases of diarrhea and other waterborne illnesses.

With the improved access to clean water, children will have the much-needed time that is required to finish schoolwork and to study. Women will have the opportunity to start economic projects and have more time on their farms creating larger agricultural output.

$0 – This project has been funded through the generosity of the G3 Foundation, of Costa Mesa, CA, the USA with help from an anonymous donor.