The project was to build a rainwater harvesting system for the needs of the school.

This project has been completed.

First, off this project was a great success! The plan was to install a 3,000 liter water tank at Shibuche Primary School to improve their access to water, provide water from a cleaner source, as well as reduce the burden placed on children for carrying water, and have more access to water for watering their tree seedlings as part of the schools IGA.

The contractor, the school’s deputy, and I picked up funds on January 30th. At that time we purchased and arranged for transport of all materials. The tank ended up only costing us 24,000 ksh, less than anticipated because we were able to get one locally. We also bought plain sheet metal instead of gutters which reduced our cost and paid 1,400 for transport rather than 1,500.

All of this was good because there were some things we did not account for in the budget. We needed 3 kg of nails for 240, additional sand for 900, we paid 5,000 for labor rather than 4,500, and we had to buy brackets to hold the gutter (plain sheet) for 450. Furthermore, we had to contract a plumber to install the tap and the piping that was beyond the skill of our other contractor. He needed a long nipple connector for 150, a galvanized ½ in socket for 60, bosswhite for 300, hemp for 60, stop end 3 in pipe for 500, transport of materials for 200, and labor at 1,500. Luckily, everything worked out and we were able to purchase everything that was needed.

Initially, we anticipated construction to be done on February 4th but because we ran out of sand and had to set a contract for a plumber, we met and took care of those things on February 6th. Construction was then completed on February 11th.

The deputy told me on February 6th that he wanted to get some wire mesh and additional cement to encase the tank in cement so that it would be protected from weather damage and vandalism. However, we didn’t have the money in the budget to do so. The deputy was able to pull resources together and found some wire mesh along some of the school’s fencing that was becoming weak but could be suitable for cementing. Also, there was enough cement to protect the tank. I am glad that the project was completed as they wanted, and happy to say that the deputy really took a leadership role in this process. He contracted the construction and plumber, made the budget, and found resources to make sure the project was a success.

The school’s headmaster and deputy were extremely grateful to see the project completed, so much so that they gave me a chicken as a gift! The school now has an operational water tank and rainy season begins in a few weeks.

We are grateful to Elizabeth for completing this project so rapidly and skillfully. We are still seeking funds to reimburse Water Charity for the funds that were advanced, so there will be sufficient money on hand to continue this successful model. 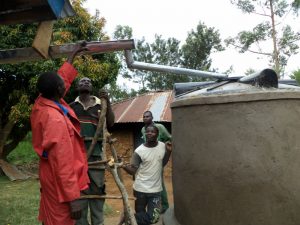 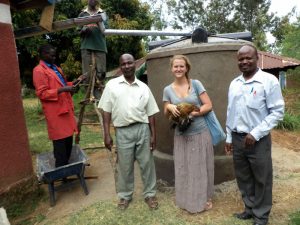