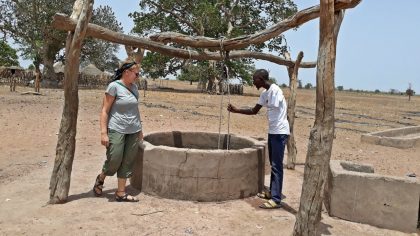 Community Description
Located about 6 km from the town of Soma and 10 steps from the southern border of Senegal, the community of Seno Bajonki is populated by a little over 1,000 people from the Fula tribe who make their livelihoods growing crops such as millet, sorghum, maize, beans, and groundnuts. The crops harvested from the community’s farms serve as food for family and friends and are sold by the community women on the streets in Soma.

Six years ago, the Seno Bajonki became the site of a new school, which now has 200 students ranging from kindergarten to grade six.

Problem Addressed
In Seno Bajonki, as in many Gambian communities, the biggest issue is access to a steady source of clean drinking water. The community has 4 uncovered wells. The lack of well coverings has led to water contamination. The wells are 45- to 50-meters deep, making it a laborious task to draw water for a single household to serve them for even a few hours. Because of the contamination, the well water can only be used for animals and household chores; drinking it has led to sickness. 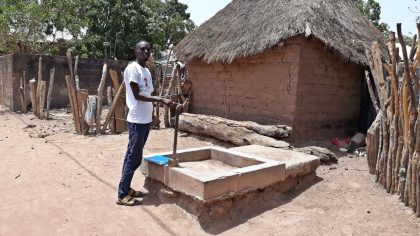 The current water situation is causing friction within the community. First, it creates tension between the school and the community. The school tap is being overused, which has caused it to be worn down and in need of rehabilitation. Thankfully, the Ministry of Education is helping to fix it. That said, it will continue to be overtaxed until the other taps in the village are working.

As it is, girls in the community spend many hours fetching water and don’t have time for their studies. Sometimes they are late or don’t show up to school because of their time spent fetching water for their families. Moreover, the village has experienced a decline in overall health. This might be attributable to the drinking/use of the well water, but it is likely also the long arduous hours spent fetching water.

When asked about their health, community members who drank well water were more likely to complain of issues like stomach pain, diarrhea, and a general decline in health. Those that have access to the tap did not complain about these issues. Community members also talked about how the rainy season will worsen the contamination of the well water making it even more unsafe to drink. Overall, this water scarcity causes tensions between community members and within families. 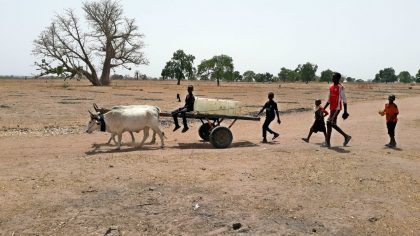 Project Description
A new Grundfos solar-powered submersible pump system will be installed, capable of providing 50,000 liters of water per day. Trenches will be dug, and PVC pressure pipes will be laid across the village. Four new standpipes will be provided, adding to the current 5 standpipes. This will enable the system to provide water for those living further down in the village.

The community will host and feed the plumbing team, digging of trenches, and all manual labor. They will also contribute some cash toward the project.

Project Impact
This project will benefit the village’s 1,700 residents.

Monitoring and Maintenance
Since the community had taps that worked previously, much of the infrastructure needed to monitor the taps is present. A very solid water management committee has been established, which is made up entirely of village women. When completed, they will work transparently and hand-in-hand with the Village Development Committee and all household heads, for the sustainability of the water system. The management will include:

Let Girls Learn
The project is a great benefit to women and girls, but especially to the girls who are in school currently or are school age and haven’t started yet. If the girls are spending less time fetching water at the well, they will have more time and energy to spend on school and their studies. They will avoid exhaustion at school or in the evenings while they study. Some girls, especially young ones, are kept at home, away from school, because their family requires them work at home. Their parents can’t surrender them to school because, without the child’s labor, all of the work in the compound would go unfinished. With working water, there will be less work for mothers and they will be more likely to let their young daughters and granddaughters go to school.

Project Funding
This project has been funded by an anonymous donor. Please make a general donation to Water Charity to allow us to continue to implement great projects such as this one.