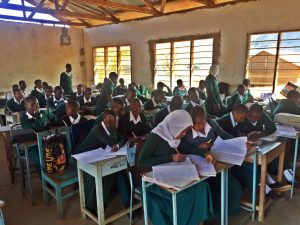 Community Description
Xxxxxx Secondary School is located on a winding road that snakes through a number of mountains that sit to the north of Same Town. The area surrounding the school itself is sparsely populated. The school is located approximately halfway up a small mountain and at its elevation the climate is quite arid, though some of the surrounding mountains are capped by dense forests.

The school’s population of 545 students consists of those who come from both the villages nestled in the nearby mountains as well as from villages that sit along the highway that passes along the border of the mountain range. Given that it is the only secondary school available in the ward, students will often walk up to 12 kilometers to school every day. This means that a typical day for a student will start well before sunrise, as they prepare for school, do their morning chores and walk.

The school itself has very basic facilities, though the school community, especially the headmaster and some dedicated teachers and board members, have been working diligently to improve it. The students in the school face many challenges in their daily lives. Predominantly they come from very poor backgrounds. Their families mostly engage in small-scale farming and herding activities. They often struggle to contribute money for their children to eat at school, meaning that many go throughout the school day with no food. Outside of school, students are often expected to help significantly with household chores. 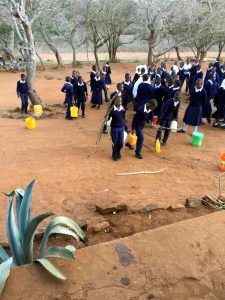 Despite these challenges, the children are often eager to learn and are happy. They especially enjoy games of soccer and netball along with socializing after school has ended. Their academic performance is generally very low, with very few students (less than 10%) passing on to advanced level studies every year. The school has been improving year after year in this regard, however.

Problem Addressed
The biggest and most basic problem facing the school is the availability of water, especially during the dry season. The school currently relies very heavily on the system of public water taps which run along the road through the nearby village to supply its drinking water, cooking water, water for cleaning and for the toilets.

As it stands, students are expected to carry all of the water for the school in buckets from these taps. The typical requirement is that each student brings 5 liters of water to school every day. However, because the taps are located at some distance from the school and they flow sporadically, the water that is brought is often insufficient. In this case, students will be taken from class and sent to fetch water. This means that depending on the day the students may need to walk up to 3 km to find a flowing tap. This problem becomes dramatically exaggerated during the dry season because the taps flow even less regularly and with less volume.

As recently as two years ago the school actually needed to pay to have water brought to it by car from the Same Town located 12 km away. This issue presents a huge burden on the school in its mission to educate students.

Project Description
This project is to build a water storage tank at the school with a capacity of 80,000 L, along with an associated set of water harvesting gutters on the school grounds.

The tank will sit between two class buildings, both of which will be equipped with gutters. The tank will also be connected with the local water system so that when water is flowing it can be stored directly in the tank.

The school has found a contractor who was born and raised in Vumari Village and specializes in water tank construction. The tank will be constructed of cement, and reinforced with steel bars. He has a team of skilled workers who he will bring to help him complete the project. Because the contractor is also a community member, he has offered a considerable discount on his labor for the project. 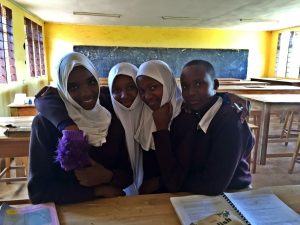 Water Charity funds will be used to buy the building materials and transport them to the school, and to pay the contractor and his team.

Project Impact
575 students and staff will benefit from the project.

Monitoring and Maintenance
Three members of the project committee, two teachers and the headmaster, will be responsible for the monitoring and maintenance of the project in a very hands-on way. Along with supervising and assisting in the collection of the necessary building materials, they will be educated by the contractor about the construction of the tank and any potential problems that can arise as the tank ages.

The school will then be able to use its funds to make any small repairs that might be needed in the future. Furthermore, the teachers will be responsible for closely monitoring the amount of water in the tank and ensuring that its usage can be maintained throughout the dry season without calling on students to leave class to collect water.

Let Girls Learn
Since girls bear a major burden in collecting water and are inordinately affected by the lack of clean and safe sanitary facilities, and this project will impact on those issues, we are designating this as a Let Girls Learn + project.

This project has been completed under the direction of Peace Corps Volunteer Vaughn Franz. To read about the start of the project, CLICK HERE. 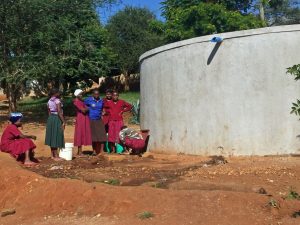 The project was designed to build a water storage tank and water harvesting gutters on the school grounds. 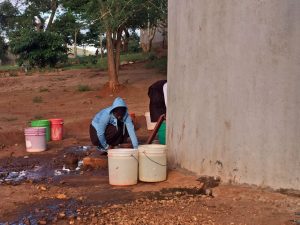 Vumari Secondary School has a community of 544 students and over 25 staff members. The semi-arid climate makes reliable access to water a difficulty for the school, especially during the dry season. The project consisted in constructing a water tank along with a gutter and pipe system to harvest rain water. The intended goal for the tank was to eliminate the need for students to leave school to fetch water, often walking several kilometers. The tank was constructed over the months of January, February and March of 2018 and has a capacity of 80,000 liters.

The school community contributed significantly to the project, providing all of the required aggregates, sand, and water for construction as well as a portion of the cement used. These materials were collected and stored at the school by community members over the months of December and January.

Late in January the construction began with an assist from community members in clearing and leveling the plot of land for the tank. Next a craftsman, specializing in water tank construction, born in the nearby village but working in areas across the north of Tanzania, began his work along with craftspeople from the surrounding communities. 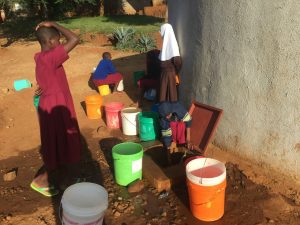 Over the course of February, they constructed the tank. The structure itself is cement reinforced by steel bar. After measuring and plotting the site, the foundation of cement was laid. After this, the skeleton of steel bar was set up for the walls and cement was packed in around this. Finally, a number of support posts were constructed inside and the roof of the tank was put into place, again consisting of steel bar and cement.

The construction of the gutter system followed this, The gutters were made on site and affixed to three of the buildings on school grounds and then fed to the tank via a pipe system. In the first week of march the construction was complete.

The week following the rainy season began, and the tank began to collect water. As it sits, the tank is full and functioning perfectly, with water waiting to be used during the dry season.

The community was very appreciative and positive about the project. One of the school board members, Melens Sekiete, remarked “The construction of this tank has been a great help to us. It is a very good step in improving the education that we can offer at our school.”

We extend our thanks to Vaughn for completing this important project. 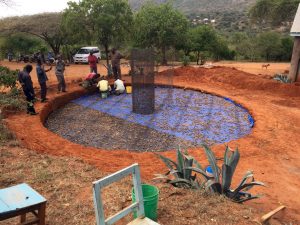 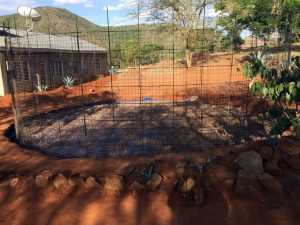 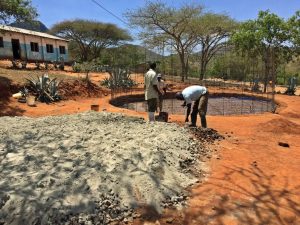 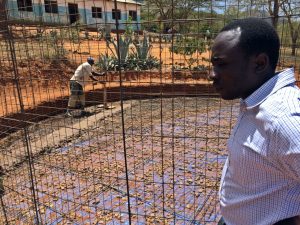 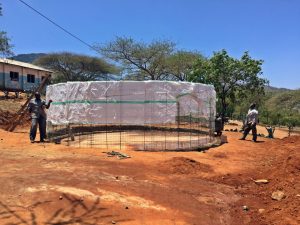 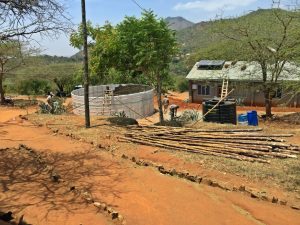 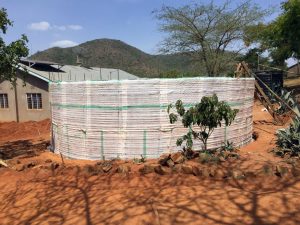 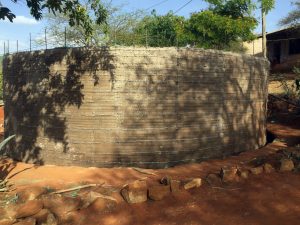 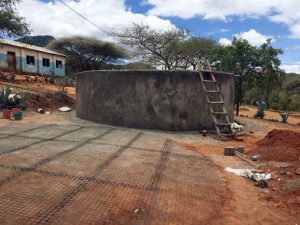 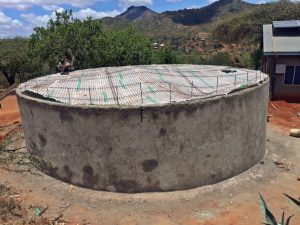 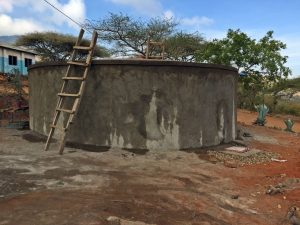 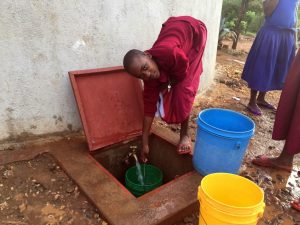